Home How to Final Fantasy VII Remake: Best weapon builds for Aerith Gainsborough
How to 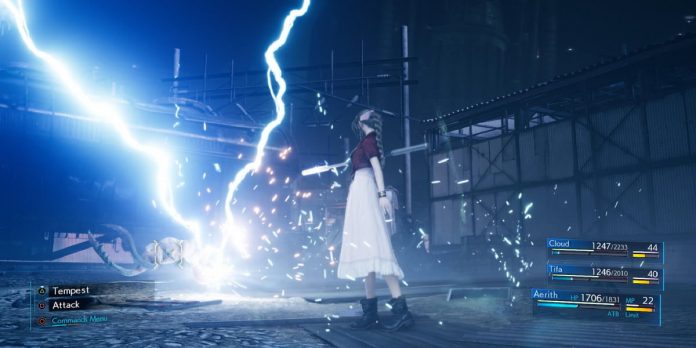 The final addition to the Final Fantasy VII Remake party will be Aerith Gainsborough, who is a champion healer and mage. Aerith is introduced to players as a flower girl who Cloud runs into. Right off the bat, it becomes clear that Aerith is the only person, other than Cloud, who can see the Mako-fueled nightmare ghosts floating around.

Aerith has a history of being a fan favorite in the game. Arguably one of the best healers in any game, Aerith’s strength comes from her staff and her ability to ensure the team’s survival.

Aerith’s skills stand out from the team because, generally speaking, her attacks focus mostly on magic rather than face-to-face combat. This means that her weapon upgrades are a little different than those of Barret, Tifa, or Cloud. A lot of her weapons focus on her defensive magic, but now her magic can be used as heavy-hitting attack magic. Here is a good idea of how to upgrade her weapons to utilize her attack, defense, and healing magic.

Aerith’s default weapon is the Guard Stick, which comes with the proficiency Arcane Ward. This attack will conjure a magical area around the team, and any attack spells cast within this ward will automatically be cast twice. This allows for extra hits on enemies who will not back down.

The strength of this weapon comes from its ability to tap into Aerith’s inherent strengths. This weapon is geared heavily toward magic, providing boosts to basic but effective magic upgrades for Aerith to use.

Due to the nature of this magical weapon, adding MP Up and Magic Up Materia will help give Aerith an extra boost. Additionally, Heal, Revive, and HP Absorption are a perfect fit. These Materia keep Aerith and the team alive and going to the distance. To help Aerith with any attack she may have to perform, adding an elemental Materia will also behoove players.

Players will have access to the Silver Staff fairly soon after Aerith joins the team. The Silver Staff can be found in chapter eight. Players will be able to purchase this weapon for two Moogle Metals at the Moogle Emporium in the Sector 5 Slums. This weapon comes with the proficiency Sorcerous Storm, which deals magic damage to nearby enemies.

Unlike the Guard Stick, the Silver Staff allows Aerith to utilize all types of magic, making this item one of the best-suited weapons for Aerith. It contains upgrades that will help both her offensive and support magic while simultaneously boosting her magic power. Once players start unlocking the upgrades on this weapon, the Silver Staff will greatly outclass the Guard Stick as a magical weapon.

Since Aerith is the primary mage, adding MP Up and Magic Up are clear choices for most of Aerith’s weapons. Healing, Revival, and HP Absorption are also necessities to Aerith’s tool belt, ensuring that her magic is working to keep herself and enemies alive. However, adding the additional Magnify can be extremely helpful. This Materia gives Aerith the ability to heal everyone at once, which is immensely helpful in defeating strong enemies.

The Arcane Scepter is an easy-to-miss item. In order to get this weapon, players will need to complete either the A Dynamite Body or Shear’s Counterattack side quest in chapter nine. Although the side quest that a player gets will change based on the events of the story leading up to this, either side quest will provide this weapon. The Arcane Scepter comes with the proficiency Fleeting Familiar. This attack will summon a fairy that attacks enemies periodically and after the use of abilities and spells.

Out of all of Aerith’s weapons, this one is an offensive magic weapon. This weapon will turn Aerith into the party’s primary damage dealer, making this weapon one of the best (or at least most exciting) weapons to use with Aerith. There are loads of magic attack power upgrades as well as elemental boosts to ensure that Aerith is hitting the enemy’s weaknesses for maximum damage.

This weapon is powerful enough that there is not a whole lot of Materia that needs to be paired with it. To ensure each strike Aerith deals, equipping element Materia will ensure that any weakness the enemy has is exploited. HP Absorption can also keep Aerith topped up and ready to battle. Also, Aerith could always use MP Up and Magic Up.

To find the Mythril Rod, players will have to reach a chest in the Train Graveyard in chapter 11. Toward the beginning of the Train Graveyard, where players first fight some rats, head through one of the abandoned train carriages instead of going up the ladder. There will be a small open area toward the end, where the chest can be found. This weapon comes with the ability of Ray of Judgement. Ray of Judgement fires an energy burst that hits enemies multiple times. This attack will also have an increased stagger bonus, but it costs 2 ATB to use.

It’s not surprising that this weapon is another magic-based weapon, but it also has a few defensive upgrades. This weapon will help Aerith maintain her magical dominance while giving her just a little more survivability than previous weapons have. This makes for at least a decent weapon for Aerith.

Aerith can never have too much magic, so giving this weapon the standard MP Up and Magic Up is beneficial. Additionally, adding a Healing and/or Revive Materia will provide Aerith the much-needed boost of team healing. Adding element Materia can also help ensure that every strike Aerith lands will hit an enemy where it really hurts. The one Materia to add  that is a little out of Aerith’s norm is Steadfast Block. Although it seems like an odd choice, it works well with the Mythril Rod’s defensive upgrades.

Toward the end of chapter 11, players will face off against an Eligor Boss in the Train Graveyard. To get this weapon, players will have to use Steal on the Eligor and take the Bladed Staff from it. The Bladed Staff comes with the Lustrous Shield attack. This defensive spell conjures a magical shield that keeps enemies at bay and stops projectiles from attacking the team.

MP Up and Magic Up Materia are definitely necessary for this weapon. However, to increase the chance of boosting Aerith’s magic damage, adding a Luck Up will improve the chances of Aerith landing a critical hit. Pair this with some element Materia and Aerith should be ready for any battle.

Aerith’s final weapon in the game is a Reinforced Staff that can be found in a chest in chapter 17. The chest is located in the break room in the Specimen Enclosure area where the chapter begins, making it an item that is difficult to miss. This item comes with the ATB Ward ability. This attack is super helpful in that it helps allies who are in Aerith’s ward regain partial ATB to their gauge. It costs 2 ATB for Aerith to cast this attack.

This weapon gives Aerith more of a defensive boost. In return, a lot of Aerith’s all-out magical upgrades are sacrificed. The Reinforced Staff allows Aerith to continue being the party’s main mage and provides her with some strong defensive bonuses. This weapon is ideal for players who want Aerith to remain the main healer while giving her a bit more defense.

A lot of the Materia that are suited for this weapon are the same as previous weapons. MP Up, Magic Up, Healing, Revival, and HP Absorption will help keep Aerith the primary healer and magic-user of a party. Additionally, adding Steadfast Block and element Materia will keep Aerith safe and ensure every attack she is forced to do will land.