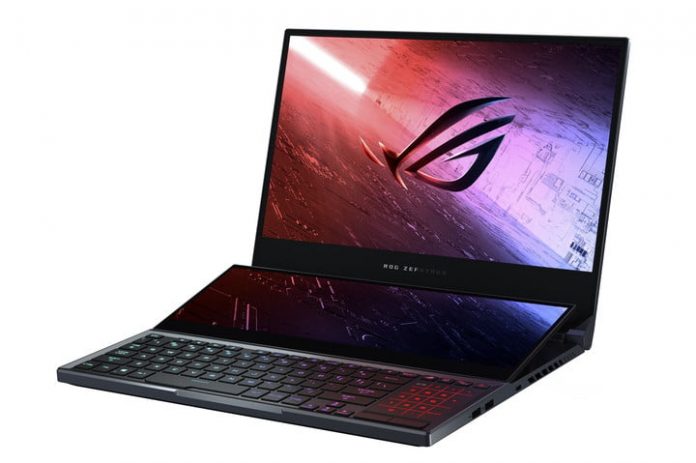 It’s a wonderful time for laptop gaming. With the launch of new silicon from Intel and Nvidia, a number of manufacturers are refreshing their gaming notebooks to include Intel’s 10th-gen H-Series processors and Nvidia’s new GeForce RTX Super mobile graphics cards.

The result? Acer, Asus, Lenovo, MSI, and Razer are all launching new, slim gaming laptops that pack in better performance for playing games, creating content, and staying productive on the go.

Of the dozens and dozens of refreshed or new gaming laptops that have been announced, here are the five that look the most exciting.

Let’s start with the most unique gaming laptop announced. The ROG Zephyrus Duo is a brand new laptop, featuring one of the most interesting second-screen implementations we’ve ever seen.

As suggested by the Duo part of its name, Asus’ ROG Zephyrus Duo comes with a 14.1-inch 4K secondary display built right above the keyboard alongside a 15.6-inch main screen, giving gamers more flexibility and control. The ScreenPad Plus technology that debuted on the ZenBook Pro Duo brings a Touch Bar-like experience, allowing you to display apps, game controls, and more on the secondary screen while freeing up the main display for a more immersive gaming experience. When you open up the lid, the ROG ScreenPad Plus tilts up to a maximum of 13 degrees, which not only makes using it more ergonomic, but the lifting design also increases airflow by as much as 30% to keep the powerful silicon inside cool.

Under the hood, you’re getting Intel’s 10th-gen Core i9 processor alongside Nvidia’s top of the line RTX 2080 Super mobile graphics. Gamers will also benefit from the 300Hz refresh rate main display if they opt for the FHD model. If you need more pixels, the 15.6-inch 4K UHD configuration comes with support for 100 percent of the Adobe RGB color space, which makes this a versatile laptop for content creation.

In addition to the all-metal Zephyrus Duo, Asus also announced the ROG Zephyrus S15 and S17, ROG Zephyrus M15, and the ROG Strix SCAR 15 and 17. All these laptops will be landing in the second and third quarters this year, though pricing information was not immediately available.

Though it might not boast fancy extras, Lenovo’s Legion 7i is perhaps the most advanced gaming notebook coming out of this initial refresh. Like some of its high-end peers, this laptop boasts a slim Max-Q design for maximum portability. Powering the setup is a 10th-gen Intel Core H-Series mobile processor paired to an Nvidia GeForce RTX 2080 Super GPU, and the configuration allows it to handle AAA games with ease.

Lenovo’s Legion 7i — and its mid-range Legion 5i sibling — makes use of Nvidia’s Advanced Optimus technology to help deliver better battery life without foregoing G-Sync. If you’re gaming or working on GPU-intensive tasks, Optimus engages Nvidia’s discrete RTX graphics for better performance, but when you’re working on lighter workloads, Optimus switches over to Intel’s integrated graphics for better battery life. These Legion laptops are currently the first laptops to use Advanced Optimus.

Acer is putting power to the metal with the Triton 500 laptop. Not only does this gaming beast top out with Intel’s 10th-gen processors alongside Nvidia’s GeForce RTX 2080 Super mobile graphics, but it also comes in a sleek all-metal design complete with Acer’s innovative all-metal fan blades to help boost airflow. With the custom Acer Vortex cooling system, this year’s Triton 500 gains a 33% boost in cooling compared to last year’s model, and the metal fan blades help to keep noise levels down.

Other features sure to appeal to gamers include a 300Hz refresh rate with 3ms response time for responsive gaming performance, 7.5 hours of battery life, and G-Sync support for tear-free gaming. The display can also handle 100% of the sRGB space, making the Triton 500 a versatile system for on-the-go content creation as well as gaming. All this is packed into a 4.63-pound package that’s 0.7-inch thick.

The laptop is expected to land in May starting at $2,199. In addition to the Triton, Acer also refreshed its Nitro 5, which pairs Intel’s 10th-gen Core i7 processor and Nvidia’s GeForce GTX 1650 Ti graphics for a starting price of $749 when it becomes available in May.

If you want more understated aesthetics on your notebook, MSI’s GS66 Stealth trades in the flashier designs on most traditional gaming laptops for a sleek, matte sandblasted core black chassis. The laptop packs in Nvidia’s RTX 2080 Super graphics in a Max-Q design alongside Intel’s 10th-gen Core i9 processor.

With all that performance, you’ll want a display that can keep up with your gaming action, and thankfully the GS66 Stealth packs in a 15.6-inch FHD IPS screen with a 300Hz refresh rate. You’re getting all this in a package that measures just 0.71-inch thick.

If you want to trade in the muted black aesthetics of the Stealth for something a little flashier, the GE66 Raider is equipped with similar specs and comes with LED lighting in a sleek aluminum casing. The Stealth is available for preorder from Newegg for $1,599 and will land at Best Buy on April 15. The $1,799 Raider will be available on April 15.

Like the MSI Stealth, the appeal of Razer’s new Blade 15 is in its understated aesthetics, and this laptop’s aluminum-clad all-black design houses some powerful specs under the hood. You wouldn’t know it by looking at it, though, as the Max-Q design allows this GeForce RTX 2080 Super-equipped laptop to stay as slim as an ultrabook.

Inside, you now get Nvidia’s best mobile graphics (up to RTX 2080 Super) alongside Intel’s 10th-gen eight-core Core i7-10875H processor that can reach up to 5.1GHz clock speeds.

Other features include Wi-Fi 6 Gig+ connectivity for lag-free gaming along with a 15.6-inch FHD display with 300Hz refresh rate for tear-free action. It also now comes with a full-size SD card slot and can charge fully via USB-C.

The Blade 15 Advanced is the sole Razer model getting refreshed, and it starts at $1,599 when it goes on sale in May. Razer has made some changes to its configurations. The Base Model now comes with a 144Hz and an option for the 4K OLED display.

Save $300 off this powerful Alienware gaming laptop at Best Buy

Will that unlocked phone work with your wireless carrier? Here’s how to tell

Which Hulu plan is the right one for you?

Say what you will about Amazon’s devices, but they sure do last