Home News Battle of the mid-ranges: Galaxy A51 vs. Pixel 3a
News

Battle of the mid-ranges: Galaxy A51 vs. Pixel 3a

With a large AMOLED display, four rear cameras, and a visually striking backside, the Galaxy A51 is certainly one of the most eye-catching mid-range phones out there. The 4,000 mAh battery will ensure you get to keep using the phone for hours on end without needing to charge up, and additions like a headphone jack and expandable storage are always great to have.

The Pixel 3a may look a bit dull compared next to the Galaxy A51, but it still has plenty to offer. Outside of the more boring design and larger display bezels, the Pixel 3a continues to deliver the very best camera you’ll find in this price range. Whether you’re shooting in broad daylight or nighttime, pictures look incredible. You also get smooth performance, up-to-date software, and more.

The Galaxy A51 and Pixel 3a both bring unique offerings to the mid-tier smartphone space, meaning each one is worth considering. We’d argue that the Galaxy A51 is the better choice if you’re doing a lot of content consumption, largely thanks to its superior AMOLED display, large battery, and support for expandable storage. However, if you’d rather have a top-notch camera and software that you know is always up-to-date, the Pixel 3a is the better buy. There’s also the subject of availability, with the Galaxy A51 only being sold on Sprint and Verizon while the Pixel 3a is sold unlocked and can be used on any U.S. carrier.

The Galaxy A51’s display and battery are hard to ignore 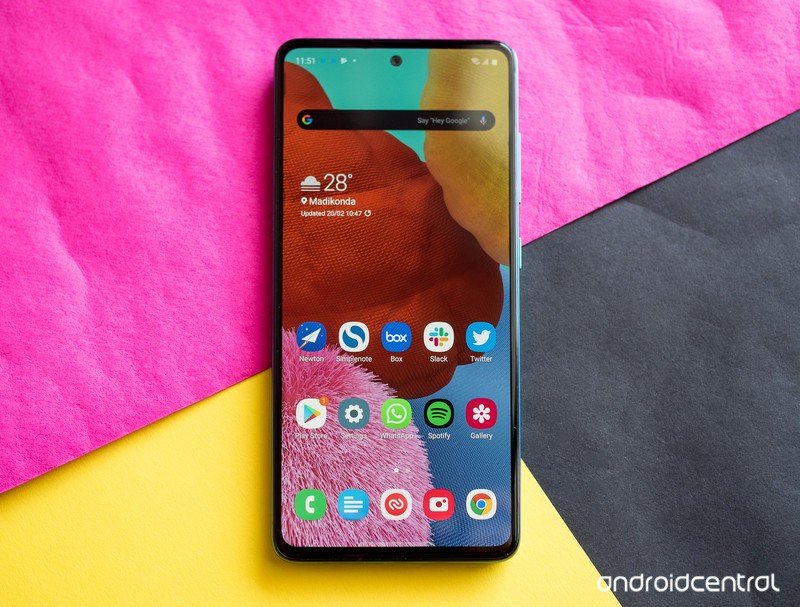 Samsung’s mid-range smartphone offerings used to be rather disappointing, but in recent years, the company has turned things around and gotten back on track. The Galaxy A51 is another example of that, offering a high-quality Android experience at a very affordable price.

One of the best things about the A51 is its display. On the technical side of things, it’s a 6.5-inch AMOLED display with a resolution of 2400×1080. In real-world use, that means the A51’s screen looks fantastic. Colors are vibrant, everything is nice and crisp, and there are very slim bezels surrounding it. The centered hole-punch cutout is also quite minimal and doesn’t distract too much from the actual display. 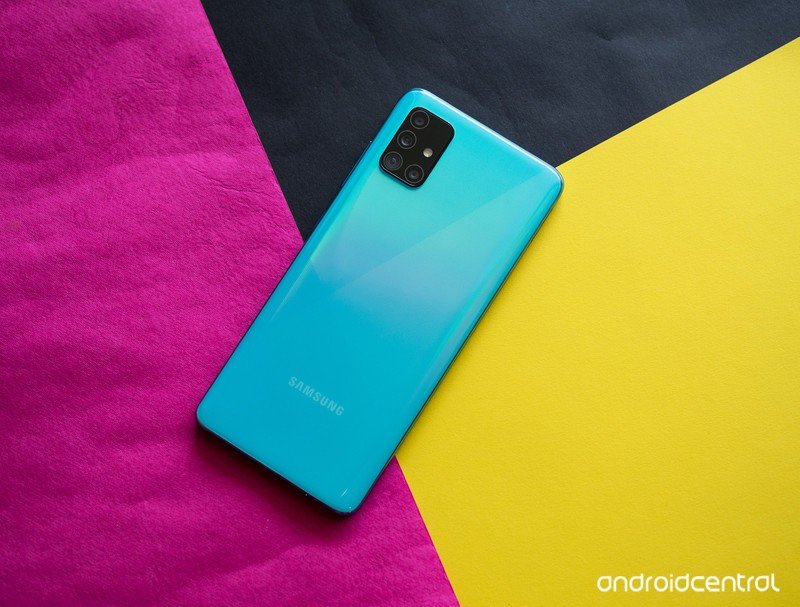 Samsung also went all-out with the Galaxy A51’s cameras, giving users a total of four sensors to choose from — a 48MP primary camera, 12MP ultra-wide camera, 5MP macro camera, and 5MP portrait camera. You’ll get the best shots out of the 48MP lens, which takes great photos when ample lighting is available yet struggles a bit in low-light situations. The quality of the other cameras isn’t the best we’ve ever seen, but at least having the option to take ultra-wide and macro shots is nice if that’s something you’re interested in.

While you’re playing around with the A51, battery life won’t be a major concern. The 4,000 mAh battery packed inside allows for long-lasting endurance, and it does so without bulking up the phone too much. Combine all of that with 128GB of storage, a microSD card slot for expansion up to 512GB, a 3.5mm headphone jack, and a gorgeous back design, and a lot is going for the A51. Performance does tend to be a bit laggy at times, but if you can overlook that for all of the other features, it’s a pretty strong device.

Camera quality is unmatched on the Pixel 3a At first glance, it can be easy to overlook the Pixel 3a when comparing it to the Galaxy A51. Not only is its design more boring and outdated, but it’s also been on the market for quite a while longer. However, you’d be silly not to give the phone a chance.

If the big draw to the Galaxy A51 is its display, the main reason to check out the Pixel 3a is its rear camera. You only get a single 12.2MP lens on the 3a, but overall image quality is better in just about every way. Whether you’re taking pictures at day or night, the phone manages to churn out shots that look incredible. Simply put, there’s no competition for a camera this good on a phone that’s this cheap. 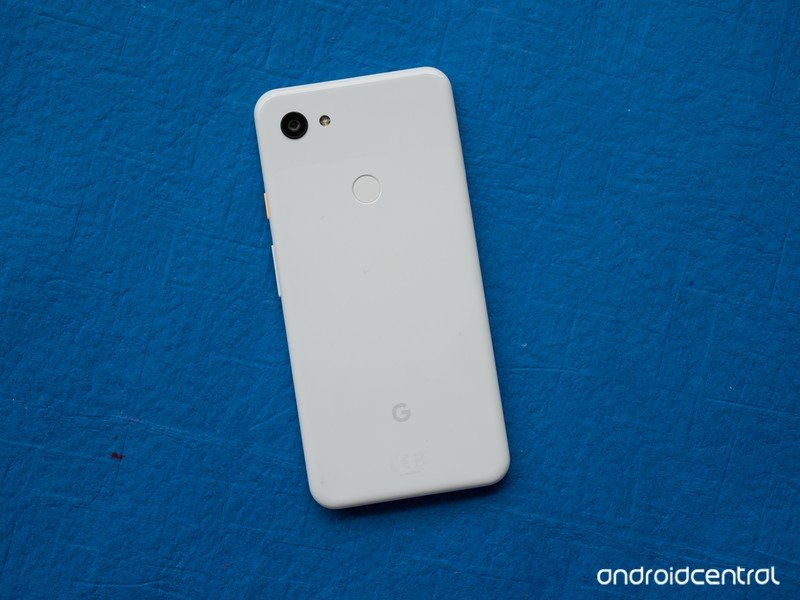 That’s not all the Pixel 3a has to offer, though. Android 10 is clean and uncluttered on the phone, and since this is a Pixel, it’s first in line for any major software updates and security patches. Google guarantees updates for the Pixel 3a through May 2022, meaning you still have a couple of years of top-notch software support. We also really like some of the extra features Google throws in, such as Active Edge and Now Playing (the former allows you to squeeze the phone to trigger the Google Assistant, the latter automatically detects songs playing in the background and shows them on your lock screen).

We’ve found that performance is also better on the Pixel 3a, which runs smooth and without any lag, unlike the Galaxy A51. There’s no option for expandable storage here, but you do still get a headphone jack.

Buy the phone that suits your needs the best

As you can see, both the Galaxy A51 and Pixel 3a are solid purchases — it just depends on where your wants/needs lie.

With the Galaxy A51, this is a phone that’s just fun to use. The bezel-less and vibrant display looks fantastic, having so many rear cameras allows for tons of shooting possibilities, and there’s plenty of storage (both onboard and expandable) for loading the phone up with apps, games, movies, etc. Performance is weaker than we’d like to see and there’s the issue of the Sprint and Verizon exclusivity, but if you can work around those two things, this is a very good phone.

Then there’s the Pixel 3a, which doesn’t have as modern of a design but downright crushes it in the camera department. It also doesn’t have the performance issues of the Galaxy A51, offers one of the best software experiences out there, and isn’t restricted to any one carrier.

Whichever phone sounds like it meets your needs the best, buy away and enjoy it!

The Galaxy A51 is a minor improvement over last year’s A50, but that’s not a bad thing by any means. With a large and vibrant AMOLED display, a generous 4,000 mAh battery, and expandable storage that goes up to 512GB, the A51 has everything you need for keeping yourself entertained.

Hands-down, the most impressive thing about the Pixel 3a is its camera. Pictures taken with the phone can go toe-to-toe with much more expensive flagships, and considering the 3a’s price, that’s darn impressive. Along with that, the phone also delivers smooth performance and excellent software.