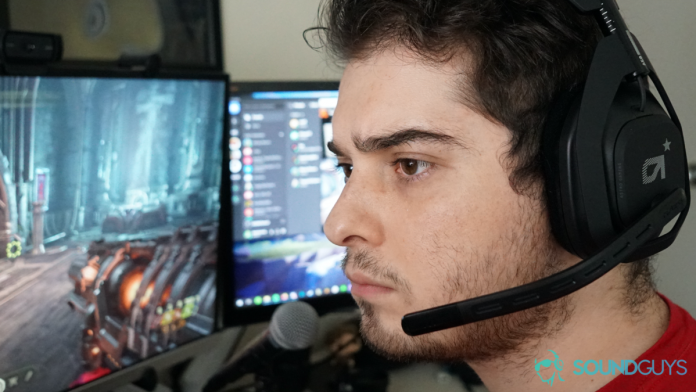 Astro Gaming has been a popular gaming headset option for a while now, offering comfortable headsets tailored to a variety of gaming needs. The new fourth generation of Astro Gaming A50 Wireless continues the line’s focus on wireless gaming using a base station for easy charging and switching between PC and PlayStation 4.

But does it live up the hype? Not really.

Who is the Astro Gaming A50 Wireless for?

When it holds together, this is a very comfortable headset.

There’s not much point beating around the bush: Using the Astro Gaming A50 Wireless was an exercise in frustration for me. This is a premium wireless gaming headset, with thick and comfortable velour ear pads, an adjustable design, solid battery life, and a slew of features. It should be very good, but it just isn’t.

This headset has a primarily plastic build, with big headphones, a hollow plastic band, and an attached flexible microphone. Metal rods connect the headphones to the headband, and offer a decent amount of rotation. The velour ear pads are great for gamers with glasses, offering a softer, more flexible material for establishing a decent seal, though it offers worse isolation than leatherette. At the outset, it all really seemed well built to me. That didn’t last long.

The Astro Gaming A50 Wireless is compatible with Astro’s Mod Kit accessories, so everything is designed to be removed. The ear pads are held on magnetically, and they’re easier to take off and put on than any gaming headset I’ve ever used. The headband cushion snaps into place and is just as easy — too easy, in fact. 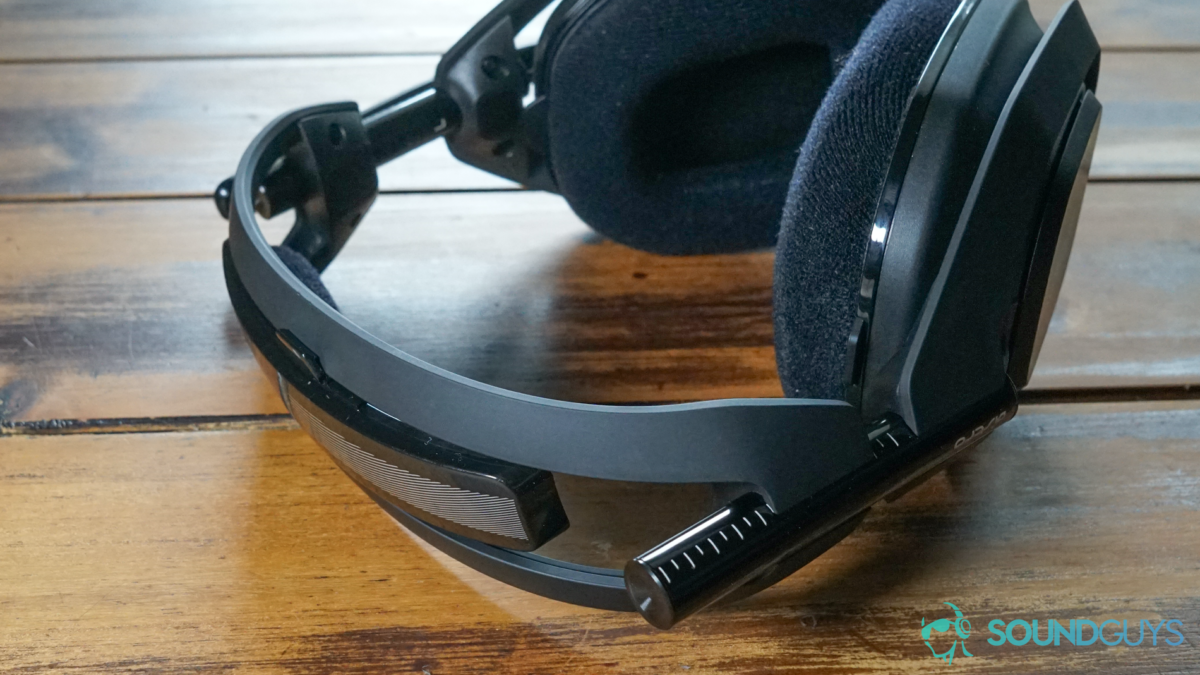 The hooks that hold the headband’s cushion in place are just too low profile.

After taking it out once, the cushion popped out almost every time I used the headset. Nothing seemed broken or bent, it was just very loose. However, it eventually got so bad I had to use an elastic band to hold everything together. Offering swappable parts can add significantly to your headset’s lifespan. Here, it makes a $300 gaming headset feel cheap.

The headband was a source of frustration throughout my time with the headphones. Apart from the band issues, using the headset is fine; but figuring out which of the many buttons or switches does what takes time. The right headphone holds the volume dial and power switch, as well as buttons for toggling Dolby Sound and EQ presets, and side buttons for adjusting the balance between game and chat audio. The microphone is on the left headphone and mutes when you flip it up. The dock worked fine most of the time. 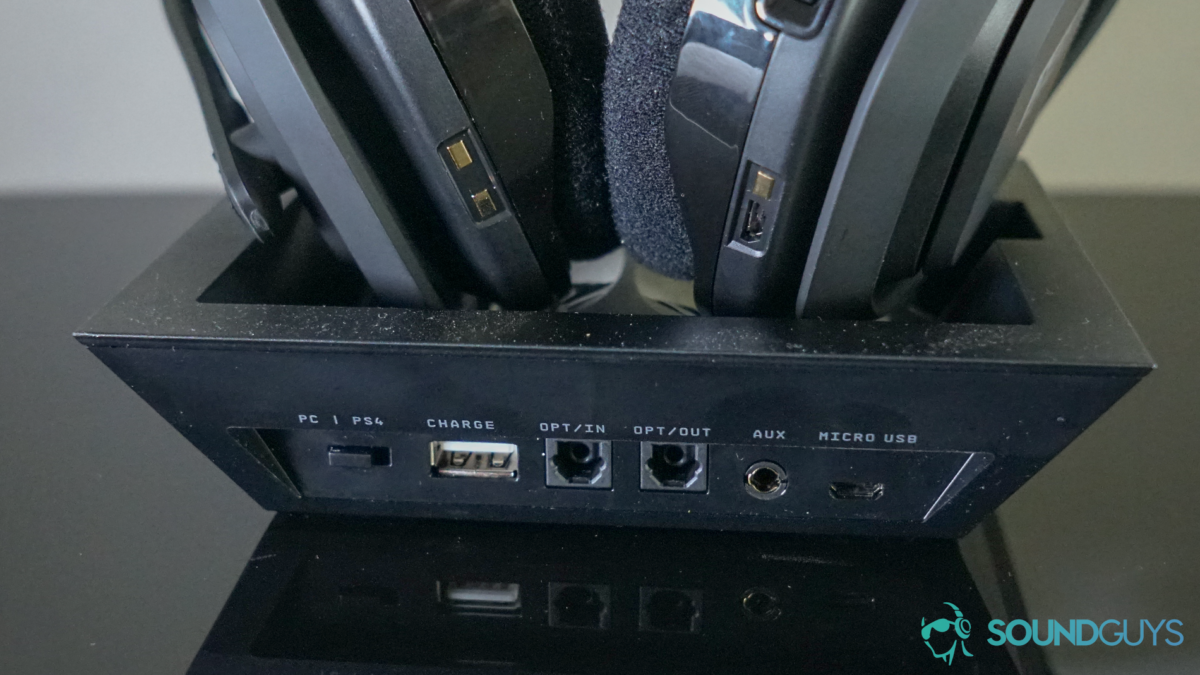 To charge, the headset needs the metal contacts on the bottom to touch the corresponding part of the base station — easier said than done sometimes.

The Astro Gaming A50 Wireless uses a base station to charge and connect with your PC or console of choice. It works pretty simply — just plug in the USB cord (and optical cable on console), put the headset in the cradle, and it will pair using a lag-free 2.4GHz RF signal. I didn’t run into much trouble on PC, but using Playstation 4 the base station lost connection to the headset and the console pretty commonly. Moreover, getting the headset to actually charge in the cradle took a little fiddling.

How good is the battery life?

Astro claims the A50 Wireless can last over 15 hours on a single charge, and while that’s very possible, we couldn’t actually tell for sure. The headset has a battery saving “feature” we can’t turn off that puts the headset to sleep after not moving for around a half hour. This means we couldn’t conduct our typical full battery test. We’d estimate around 16 hours of playback time, but your mileage will vary. On the bright side, the feature means you won’t need to worry about accidentally losing charge by forgetting to switch off the headset.

Gaming with the Astro Gaming A50 Wireless 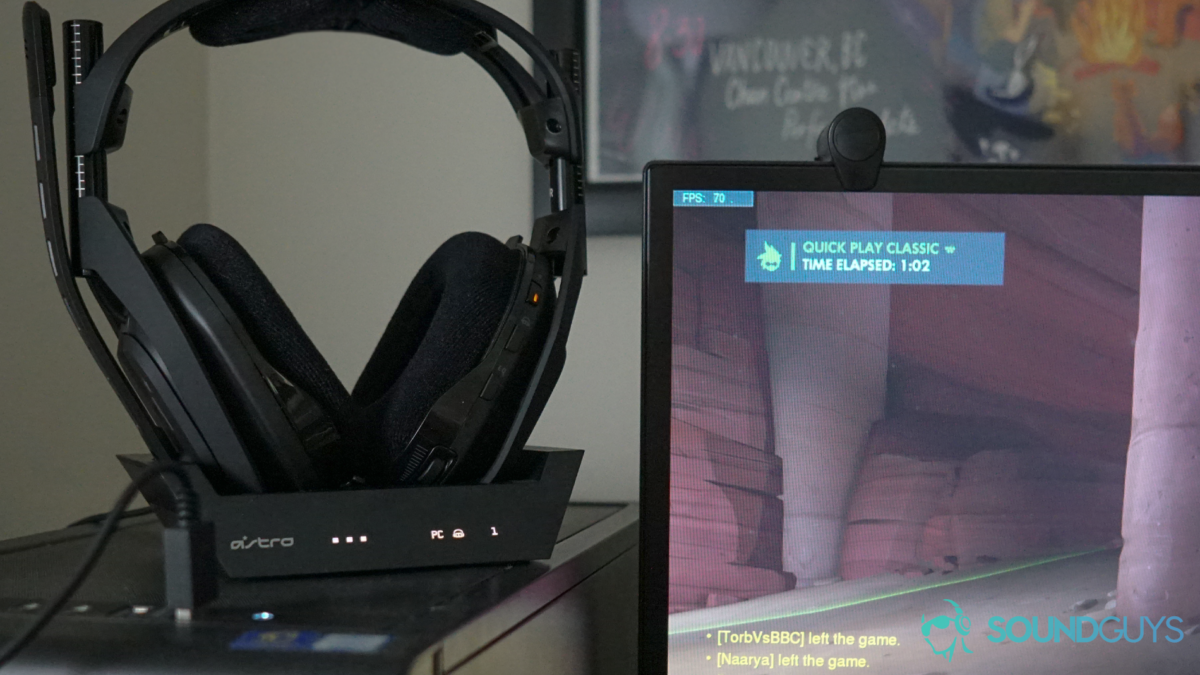 The dock displays useful information, like whether Dolby Audio is turned on and which EQ preset you’ve selected. Despite the issues I had generally with using the Astro Gaming A50 Wireless, gaming with it was a completely fine experience. Playing games such as Overwatch, Risk of Rain 2, and Doom Eternal on PC was great. The heavy metal soundtrack of Doom sounded excellent, but never overshadowed all the different snaps, pops, and booms that make the game’s combat such a satisfying audio experience.

The headset’s Dolby Audio surround sound for gaming supports both the Playstation 4 and PC. It works well enough, but it definitely offers a lighter touch than the more platform-specific standards. It was hard to tell the feature was turned on sometimes, but that’s not always a bad thing. Gaming headsets typically have a pretty wide sound stage, so even stereo sound will give you a good sense of directionality. Surround sound is a nice perk, but it won’t make most people any better at video games.

How does the Astro Gaming A50 Wireless sound? 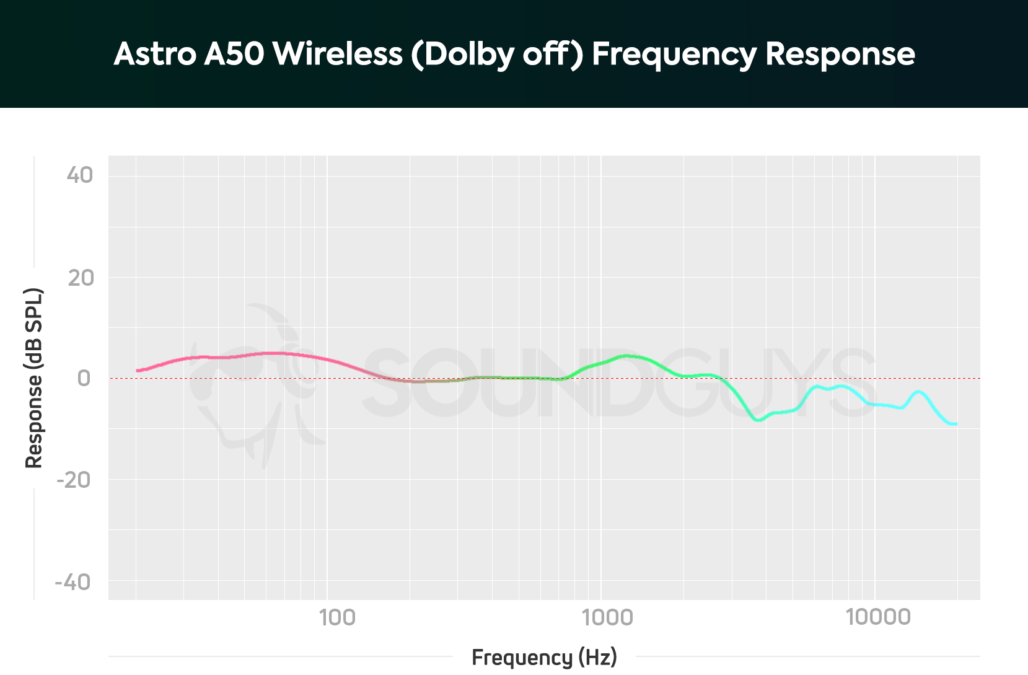 The Astro Gaming A50 Wireless sounds pretty typical for a gaming headset, with over-emphasized bass notes and under-emphasized sounds in the highs. The Dolby Audio slightly changes the headset’s frequency response when turned on, and makes the highs even quieter. However, nothing’s too far out of whack, so you shouldn’t run into any issues with some sounds drowning out other sounds.

In music, a frequency response like this is good for electronic music, and other genres where big loud bass is what you’re looking for. However, the sounds of cymbals and some vocals may come through a little quieter due to the high-end de-emphasis.

The headset doesn’t offer much in the way of noise isolation, so you’ll probably need to turn up the volume a little more than you otherwise would when things happen in the background. This is more or less a homebound gaming headset, so you probably won’t have to worry too much about noise. I wouldn’t expect being able to block out more than the whirring of a fridge down the hall.

Is the microphone any good? 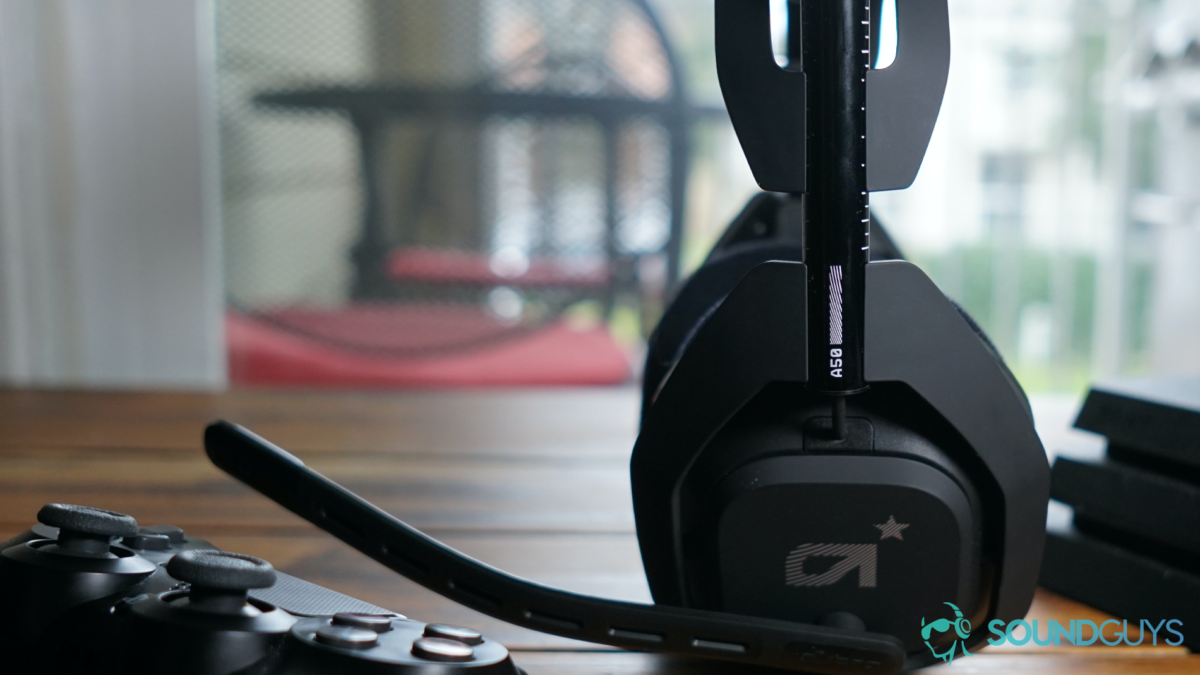 The microphone is flexible, at least.

The Astro Gaming A50 Wireless has an average microphone. Like most gaming headsets on the market, there’s a very significant de-emphasis in the bass range, which means people with deeper voices will come across pretty distorted. The sporadic peaks in the high range will make hearing things like sibilant sounds (F, S, and SH sounds) easier, though.

This is a very quiet mic, so wherever you’re playing, you’ll need to increase your input volume. Have a listen for yourself:

Should you buy the Astro Gaming A50 Wireless? 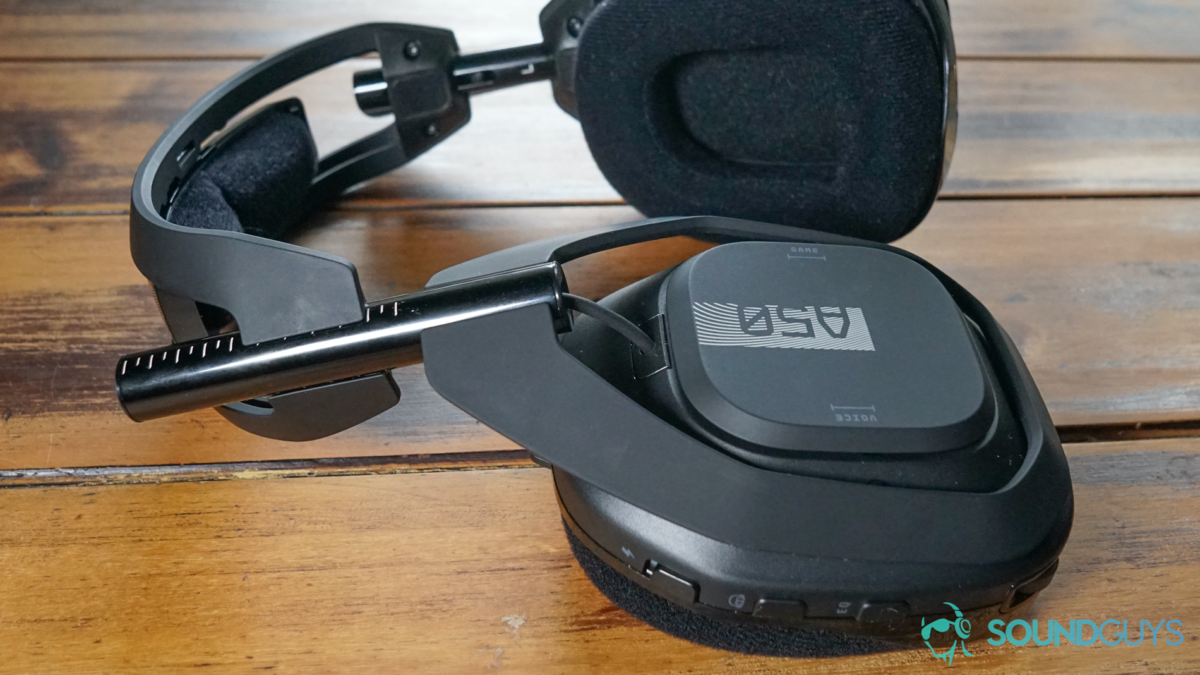 The Astro Gaming A50 ear cups rotate, and the headset can lie flat on a table.

The Astro Gaming A50 Wireless should be a great gaming headset, but it just isn’t. It’s flimsy, with a quiet microphone that distorts deeper voices. The base station is finicky, sometimes dropping connection to both the headset and the consoles, and headset doesn’t fit snugly. In fairness there’s also a lot to like here. The headset is comfortable, and the audio features it offers work well. However, it’s just not enough to justify the $300 price.

A wireless gaming headset such as the SteelSeries Arctis 7 offers all the same features, with a durable and more comfortable build. You have to plug it in to charge it, but considering it’s less than half the price, that’s probably worth it. If you actually wanted something in the uber premium realm, both the HyperX Cloud Orbit S and the Audeze Mobius sound far better — they’re slightly more expensive, but might be worth it.

The Astro Gaming A50 Wireless has been a high-end mainstay since it released in Summer 2019. Frankly, it’s hard to see why.

Best lap desks for gaming to buy in 2020

Red Magic 5G review: Big on gaming, small on everything else

The best free MMORPGs for any platform (PC, console, and mobile)

How to reuse your old phone as a sim racing dashboard

Sony PlayStation 5: Everything we know so far (Updated)

Facebook
Twitter
Pinterest
WhatsApp
Previous articleDisney Plus Price: Bundles, Deals & How To Get A Year Free
Next articleHow to make group calls on your smartphone in WhatsApp