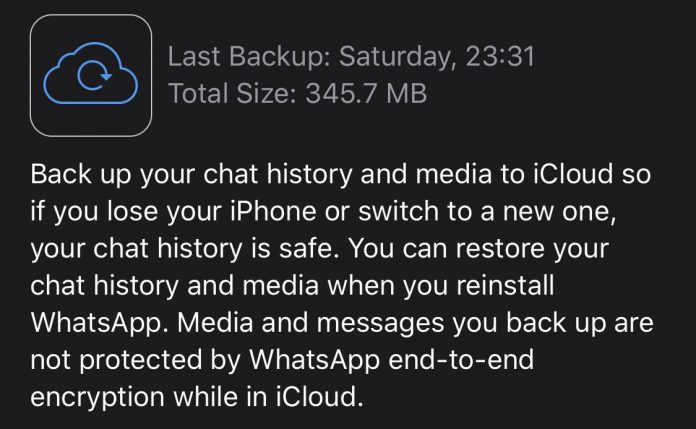 WhatsApp is in the early phases of testing a new privacy feature on the messaging platform that will allow users to secure their chat backups, according to WABetaInfo.

Currently, WhatsApp on iPhone lets users back up their chat history to iCloud, but messages and media that users back up are not protected by WhatsApp’s end-to-end encryption while in ‌iCloud‌.

This new feature would resolve that security hole by allowing users to encrypt and password protect their chat history before uploading it to the cloud.

The new encryption and password-protection feature is currently being tested on Android for Google Drive chat backups, but given the way the Facebook-owned platform goes about testing and deploying new features, there’s every chance that it will eventually come to WhatsApp for ‌iPhone‌ too.

As mentioned, this change to the way chats are backed up is still in the early stages of testing, and there’s never any guarantee that new features will make it to public release.

Earlier this week, WhatsApp’s long-requested Dark Mode rolled out to all users. Check out MacRumors’ quick guide on how to set it up.

Facebook
Twitter
Pinterest
WhatsApp
Previous articleReport Examines Challenges Apple Has Faced in Expanding Manufacturing in India
Next articleDeals: 13-Inch MacBook Pro Seeing Discounts Across Every Model, Including 2.4GHz/256GB for $1,499 ($300 Off)