VR is making medical training cheaper, better, and more accessible than ever 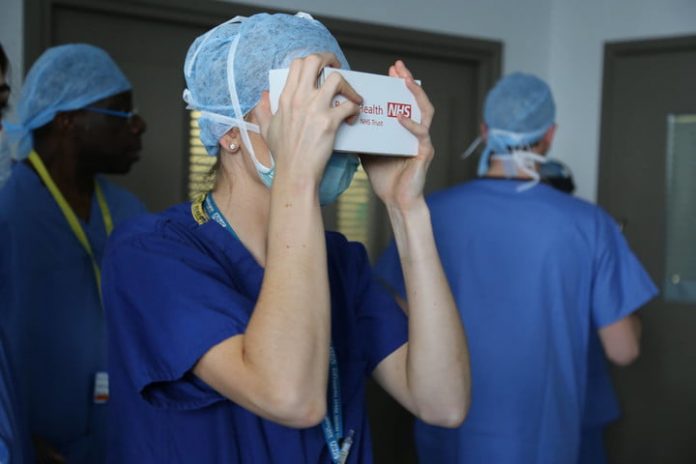 Sometimes, location is everything.

When Dr. Eric Bing started working at Dallas’ Southern Methodist University (SMU), the person in the office next to his would give him a new perspective on how virtual reality can be instrumental in teaching medical students.

SMU happens to have one of the world’s best graduate schools for video game design and Bing’s office neighbor, Professor Anthony Cuevas, helps create the curriculum for it. Surgery and first person shooters may seem worlds apart, but over the course of several months, the professors’ neighborly chitchat gave rise to a low-cost VR training system that can be implemented in locations where medical schools are limited, such as sub-saharan Africa.

In order to meet the basic need of surgical care in the developing world by 2030, the surgical workforce there would need to double, according to the Lancet Commission of Global Surgery. Shafi Ahmed, co-founder of the VR health training platform Medical Realities, has highlighted this problem as one he hopes his company’s content can address. Dr. Alex Young of the startup VR company Virti is developing a platform that gives students access to training programs for free, with an eye toward improving medical care in the third world.

Bing has spent much of his medical career working in impoverished communities in south central Los Angeles as well as overseas countries like Zambia, Haiti, Nigeria, and Belize. Throughout his decades of treating patients, one challenge has always been present: Numerous people suffer and die from easily preventable and curable diseases such as cervical cancer. That condition that ended the life of Bing’s mother.

Precancerous cervical growths are easy to diagnose with diluted household vinegar, explains Bing. They can be removed as simply as warts. However, such treatable diseases often end lives when they could be treated because the lack of local medical expertise means needy patients schedule exams too late. In the case of cervical cancer, the disease spreads and the resulting remedy may be more extensive, such as a hysterectomy, or untreatable.

“There are just not enough surgeons in developing countries to provide the care that people need.”

“We’ve always been trying to think through “How do we scale up the number of surgeons who do these procedures or any surgical procedures?” explains Bing. “There are just not enough surgeons in developing countries to provide the care that people need.” Many sub-saharan African countries, for example, have no medical schools or just one.

Bing and Cuevas brainstormed the potential for training students in virtual reality.. While diagnostic and surgical simulations are now a regular part of many American medical school programs, they’re much harder to find in the developing world given the associated costs, which can quickly rise into six figures.

When the doctor running the med program at the University of Zambia teaching hospital stopped by SMU to pick up an honorary degree, Bing got him together with Cuevas to figure how to create a VR program.

Along with doctors and professors from the University of North Carolina, King’s College London and SMU, the three created a study on teaching oncology with low-cost virtual reality headsets. Around that time, the price of Oculus Quest had recently dropped, making the budget for VR instruction feasible.

Using SMU’s VR program, numerous medical students at the University of Zambia have practiced the steps for performing a radical abdominal hysterectomy, needing to complete it within a target time and accuracy rate. The simulation’s operating room is outfitted with equipment commonly found in Zambia. Studying the VR surgical program, the dev team found users need to reflect on what they’re learning to retain information. As a result, no student can attempt the virtual procedure more than six times in one day.

Trainees “need to reflect on what they’ve learned or missed for it to stick,” explains Bing, who underscores that VR learning augments class lessons and book chapters and doesn’t replace them.

“In U.S. teaching hospitals, you have a lot of oversight and support,” explains Bing. Med schools in developing countries don’t always have those necessities. “By using the simulations, [students] are able to identify potential gaps in knowledge.”

Dr. Alex Young was snowed in on a weekend a few years ago when he started thinking about new ways to train med students. At the time, the British orthopedic surgeon was a resident at New York’s Hospital for Special Surgery (HSS) and reflecting on the thing his experience wasn’t teaching him: how to deal with the stress of emergency medicine.

“When you’ve got people sent to the E.R. from car accidents, you never know what’s going to come through the door,” says Young. Doctors at HSS, one of the United States’ top hospitals for orthopedic surgery, regularly see worst-case scenarios.

After working through a few difficult cases, a new surgeon might get used to that surge of adrenalin, explains Young, but new doctors often make mistakes because they panic. “There’s no real way in a clinical environment to test your skills under pressure,” he says.

Young’s weekend brainstorm eventually led him to co-develop Virti, a medical training platform focused on building “soft skills” in augmented and virtual reality simulations. Users are transported into real world scenes, either by themselves or with a team of fellow students, to diagnose and treat patients, often ones suffering trauma.

“We look at how well the team communicated. Did they empathize with the patient? Did they come to the correct diagnosis?” explains Young. The VR headsets can also track where the students are looking during fast-moving situations and how quickly they identify relevant problems. The company has published research showing that students who work with the Virti system have reduced stress that transfers to real-life experiences.

As Young developed Virti, he also kept in mind the experience he had working in Tanzania soon after he graduated from med school. Not only were the doctors facing stress, they also had to deal with limited resources.

In 2020, the Virti team will be launching simulations specifically for med students in Kenya and Ethiopia, in partnership with Oxford University and Torbay Hospital. To develop the new scenarios, the company needs teams on the ground capturing 360 video that includes appropriate imagery and protocol for attending to patients.

Both Young and Bing view the opportunity to offer affordable, accessible medical education in underserved communities as exciting and rewarding. “For those people who do this, it’s a lot of hard work,” says Bing. “There has to be meaning behind it.”

Bing, in particular, sees the potential to save the lives of people stricken with easily treated diseases, such as the one that took his mother’s life.

“When you’re able to help other people survive from these things, it helps the work have more meaning for you.”

Facebook
Twitter
Pinterest
WhatsApp
Previous articleLaunching little: Inside Rocket Lab’s ingenious plan to democratize space
Next articleThe hard drive of the future has been swimming through our veins all along

TCL on Tuesday announced its newest phone, the TCL 10 5G UW, will soon be available for purchase through Verizon. Priced just $400, it builds on the legacy of the TCL 10 Pro (read our review) and its 10L counterpart.The TCL 10 5G UW runs Android 10 and features a modest set of hardware that hovers in the middle of the pack, if not stepping a toe or two into the high-end.The 6.53-inch screen extends to all edges with a hole-punch cutout  in the top left for the front-facing camera. Resolution is 1080 x 2340 pixels, or what’s commonly referred to as FHD+. Moreover, it packs TCLS’s proprietary NXTVISION technology, which provides better color accuracy, clarity, and contrast enhancements.Features include a Qualcomm Snapdragon 765G processor with 6GB RAM and 128GB expandable storage. The rear packs a 48-megapixel main camera, supported by an 8-megapixel (super-wide) and 5-megapixel (macro) camera. TCL 10 5G UW 1 of 8 Around front is the aforementioned 16-megapixel camera while a 4,500mAh battery is tucked inside with fast charging capability.In terms of software, the phone is more or less a stock Android experience with just a few extra apps. Verizon, for its part, loads a couple of titles on it the device for its subscribers.One of the main draws here is that it gives Verizon customers access to a 5G phone for less than $400. Not only that, but one that supports both the nationwide 5G and growing Ultra Wideband networks.Offered in Diamond Gray, the TCL 10 5G UW will be available to purchase starting from October 29.
Read more

TCL aims to bring 5G to the masses with its TCL 10 5G UW, the most affordable 5G device in
Read more

As we enter fall, Black Friday becomes the focus for holiday shoppers. Though we're still a little way out from
Read more

Stadia: What you need to know about Google’s game streaming service

Google's vision for the future of gaming is here.The world of gaming is changing, thanks in part to new new
Read more