Home News Surface Go 2: Everything you need to know about Microsoft’s smallest 2-in-1
News

Surface Go 2: Everything you need to know about Microsoft’s smallest 2-in-1 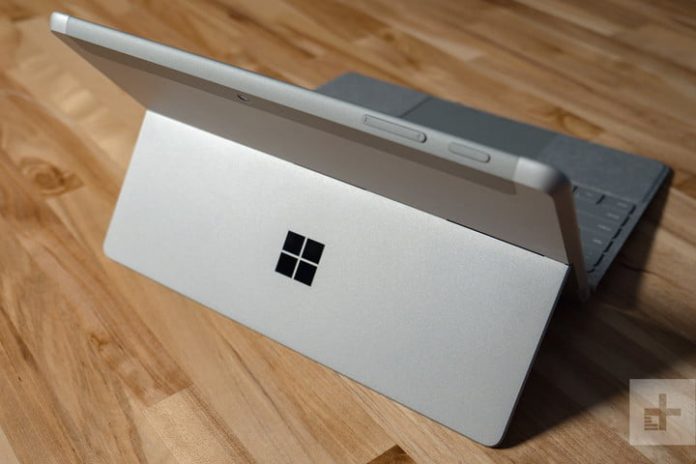 When the original Surface Go launched, it marked a new way to buy a premium Microsoft Windows 2-in-1. Not priced like the $1,000 Surface Pro, the Surface Go was more of a take on Apple’s iPad at the top of the tablet lineup. With a 10-inch screen and budget-friendly Intel processors under the hood, it was an extremely portable 2-in-1.

This spring, it is widely expected that Microsoft will unveil the successor to the Surface Go, appropriately named the Surface Go 2. Although Microsoft hasn’t said much about the device, there’s quite a bit to talk about. From price, specs, and performance, here’s everything we know about it so far.

The Surface Go was originally announced in July of 2018 with the launch coming just one month later in August. If that is telling, we could expect the Surface Go 2 to launch at around the same summer time-frame in 2020, if not sooner.

It was recently rumored that Microsoft could be holding a hardware event this spring in New York City. That rumor also indicated that the event would be centered around the Surface Go 2, and the Surface Book 3. The impact of the Coronavirus could change those plans, but it looks as though a sooner spring 2020 release for the Surface Go is not out of the picture.

As far as pricing goes, the Surface Go 2 will likely remain affordable, though no official information is yet available in this regard. Current models of the Surface Go start at $400 and range up to $549 when adding more RAM and storage or LTE connectivity. Of course, that price does not include the Type Cover keyboard or the Surface Pen. Buying those are separate $130 and $100 purchases, respectively.

Unless Microsoft changes its mind and bundles the Type Cover in with the Surface Go 2, we expect it to come in the same $400-$550 price range. That’s considerably cheaper than the Surface Pro 7, which currently starts at $749, without the keyboard or Surface Pen.

We largely expect the Surface Go 2 to look and feel just as the original Surface Go. It has been suggested by Petri.com’s Brad Sams, that the design will remain the same as the last generation with a “minor refresh.” This could mean the Surface Go 2 might launch in newer colors, perhaps in rose gold, or in a black to better take on the iPad Pro and match the other Surface products.

Asides from that, we don’t expect any crazy changes. The Surface Go 2 will likely keep its magnesium-alloy finish and signature kickstand which opens up to 165 degrees. It also could keep the same weight and dimensions. As a reminder, that was already plenty portable, coming in at 9.65 x 6.9 x 0.33 inches, and a mere 1.5 pounds.

In terms of the screen, we don’t expect changes in this area either. You can expect for the screen to come in at the same 10-inch size, and 3:2 resolution. While the bezels on the original Surface Go are now thick by 2020 standards, it might be great to see Microsoft slim it down a bit. However, granted that this is one of the selling points of Microsoft’s Surface Pro X, Microsoft may leave it as a premium feature.

The Surface Go 2 will likely maintain the same connectivity and battery life as well. It’s competitor, the iPad Pro only sports one USB-C port, so it won’t be surprising if Microsoft keeps its single USB-C port on the Surface Go 2. The other ports from the original Surface Go such as the 3.5 mm headphone jack, MicroSD Card Reader, and Surface Connect port will also likely return again.

When it comes to performance, this was one of the downsides to the original Surface Go. Under the hood, it had the underpowered Intel Pentium Gold 4415Y processor with options for 4GB or 8GB of RAM.  As we noted in our review, this combination is fine for conventional programs, but not the best for multi-tasking or heavier applications. Judging from leaked benchmarks, we expect this to change with the next Surface Go model.

The Surface Go 2 could sport an option for the Intel Pentium Gold processor and a higher-end Intel Core m3-8100Y processor as well. It is believed that configurations would come in with 8GB of RAM and 128GB of SSD storage from Toshiba. A similar choice of the processor was once found on the older Surface Pro 5 model, designed to keep the price of the device down without sacrificing overall system responsiveness.

Much like when Microsoft’s Surface Pro 6 didn’t feature Intel’s Whiskey Lake processors, the 8th-generation Intel Core m3-8100Y chipset expected for the Surface Go 2 is still a bit dated. You might get some performance gains when compared to the original Pentium Gold 4415Y, but it won’t compare well to other modern laptops.

If you want Intel’s latest 10th-generation Ice Lake processors, you have to opt for the Surface Laptop 3 or Surface Pro 7. Whatever processor Microsoft chooses, the Surface Go 2 remains a device that’s best suited for casual computing, rather than gaming, multitasking, or other heavy usage.

Qualcomm may be absent

With its portability in mind, many have believed Microsoft could introduce a Surface Go 2 powered by Qualcomm’s 7c SoC, but this once again won’t be a reality. In fact, with the original Surface Go, Microsoft intended to use Qualcomm’s ARM-based Snapdragon processor. This would have given the Surface Go the advantages of improved battery life and instant-on capabilities. However, Intel instead offered Microsoft “deep discounts” on its Pentium Gold processor, and a Qualcomm Surface Go never came to be.

As Microsoft now has its own device with a custom Qualcomm-inspired SoC, the Surface Pro X, it isn’t likely that the Surface Go 2 will be powered by Qualcomm processors. Writing about those rumors, well-trusted Microsoft watcher Brad Sams reported this “does not appear to be accurate at this time.”

You can instead expect the Surface Go 2 to keep the same options from older models for both Wi-Fi and LTE, with no Qualcomm chip inside.

The original Surface Go was powered by Windows 10 Home in S Mode and locked to apps only that are downloadable through the Microsoft Store. Users could, however, upgrade to Windows 10 Home for free, at no additional cost to download and enjoy programs like Google Chrome.

Still, the Surface Go didn’t work too great as a tablet at all. That’s in part thanks to the clunky Windows 10 tablet mode, which doesn’t have a split-screen mode or an intuitive way of switching between apps.

Microsoft is working on a new flavor of Windows 10 known as Windows 10X which could correct all this. With an improved static Start Menu, intuitive multitasking gestures, and a cleaner Action Center, it is designed to offer a more optimized touch experience similar to an iPad. However, this OS is only going to pre-loaded on dual-screen devices like the Surface Neo.

Rumors and leaked documentation have said that Microsoft could be bringing it over to regular laptops and tablets too, but this is not confirmed. As a result, we think the Surface Go will just be powered by Windows 10 Home, but we can dream of a Surface Go with a clean and efficient touch-screen friendly OS.