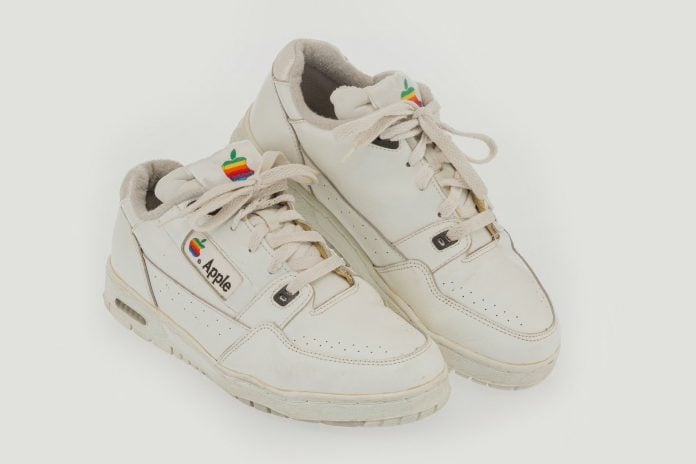 A pair of rare classic Apple sneakers sold for over $16,000 at auction this week, reports GQ.

Apple launched a fashion line in 1986, but these kicks were reportedly made as prototypes for Apple employees in the early 90s and never went on sale to the general public, making them an even more sought-after collectible today. Another pair fetched nearly $30,000 at auction in 2017, underlining just how much nostalgia these casual kicks can induce.

Classic Apple hardware and memorabilia has upped in value in recent years, with a couple of recent examples demonstrating the amount of money some people are prepared to pay to acquire anything and everything from Apple’s bygone years.

An original Apple Computer Inc. sign created around 1978 with Apple’s well-known rainbow logo is set to be auctioned off this week. The sign will be auctioned on March 26, and the starting price is $20,000. Last month, a rare fully functional Apple-1 computer sold for $458,711 at auction.

In 2017, a big auction sell-off of items formerly owned by Steve Jobs took place, including his 1984 Seiko Wristwatch (sold for $42,500), his old Birkenstock sandals ($2,750), and one of his classic black turtlenecks from his time at NeXT ($7,500). Another lot included his NeXT name tag, business card, 10K gold-filled Apple Computers pen, and a personally signed USPS return receipt, all of which sold for $16,250.
This article, “Rare Apple Sneakers Fetch Over $16,000 at Auction” first appeared on MacRumors.com