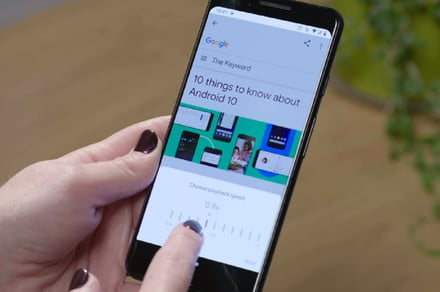 A new Google Assistant feature is capable of reading web pages out loud in 42 languages, which basically transforms everything on the internet into an audiobook.

Read It, which is accessible through browsers and Android smartphones, will automatically scroll through the web page that it is reading, with words being highlighted as they are read out loud. The reading speed may also be adjusted to go faster or slower, and buttons that appear may be used to pause the reading, or to skip backward and forward through the text.

Google developed the feature to make Google Assistant read the web pages aloud in “expressive and natural voices,” with intonations and rhythms that humans use if they read the text aloud themselves.

If the text on the web pages are not in the person’s native language, they may use Read It’s translation menu to select their desired language. Google Assistant will automatically translate the text before reading it out loud.

Google added that websites will not need any special coding to enable Read It, but it is possible to block the feature by using the “nopagereadaloud” tag. Developers, meanwhile, may integrate Google Assistant’s new ability into mobile apps.

Read It may be used in a variety of situations, such as catching up on the news while driving or following a recipe while working in the kitchen. The feature will also help people with visual impairments or reading difficulties, as Google Assistant will help them read anything they find online.

Read It may be combined with Google Assistant’s feature that allows people to change its voice and accent. The voices of singer and songwriter John Legend and Issa Rae, star of HBO’s Insecure, are also available, though Legend’s voice will no longer be available after March 23.