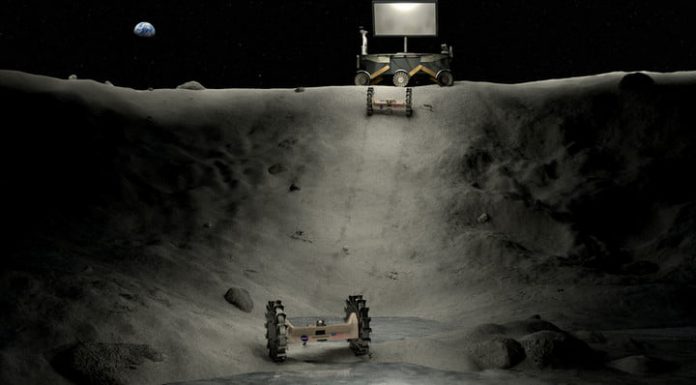 With a manned mission to the moon scheduled for 2024 and plans for more after that, NASA is funding research into how humans could access essentials for life such as food and water in the lunar environment. Two new projects from the University of Arizona will hunt for solutions for acquiring both these resources on moon missions.

Illustration of power, lighting and roving concepts operating in a lunar crater. NASA

Access to water on the moon would be hugely beneficial, both for drinking and for creating rocket fuel. Scientists believe there could be frozen water in craters on the moon, but locating it could be a challenge.

The idea is to use tiny disposable satellites called FemtoSats, only the size of a stick of butter, in combination with a powerful laser. A laser would be attached to a lunar lander which would also launch the FemtoSats. The satellites could be sent to different points across the moon to hunt for water and communicate with the lander via the laser.

“The special thing about these guys (FemtoSats) is that they’re so low-cost that you can send tens, hundreds, maybe even thousands for the price of one regular satellite,” Jekan Thanga, assistant professor of aerospace and mechanical engineering and head of the SpaceTREx Laboratory at the University of Arizona, said in a statement.

“Since the environment of the moon’s south pole is so unknown to us, disposable spacecraft are a perfect way to explore these regions without risking damage to more expensive spacecraft.”

Access to fresh food is important not only for the health of astronauts but also for their mental well-being. However, plants behave strangely in microgravity which makes them difficult to grow in environments such as space stations or on the moon.

There are also practical problems when it comes to keeping plants healthy in a zero-gravity environment. “There’s no gravity, so it’s very different than watering a garden in your backyard,” Murat Kacira, director of the Controlled Environment Agriculture Center and professor in the Department of Biosystems Engineering, said in the statement. “Keeping a proper balance of water and nutrients at the roots and maintaining sufficient oxygen levels for crops are real issues.”

The research team is developing a system for growing plants and delivering nutrients in low-gravity environments. The design will be based on previous solutions such as the Vegetable Production System, or VEGGIE, which is a suitcase-sized garden that holds around six plants, each sitting on their own pillow of clay substrate and fertilizer to encourage root growth.

Facebook
Twitter
Pinterest
WhatsApp
Previous articleISS gets a new research platform, Bartolomeo, attached to its exterior
Next articleCuriosity conquers a 30-degree slope on Mars for the first time, enjoys the view

Black Friday is generally a great time of the year to score discounted video game consoles, but 2020 could still
Read more

Sell your old Android phone for top dollar with this guide

How do I sell my Android phone or tablet for the most amount of money? With these tips and tricks,
Read more