Home News NASA asks for the public’s help to design a robot for digging...
News 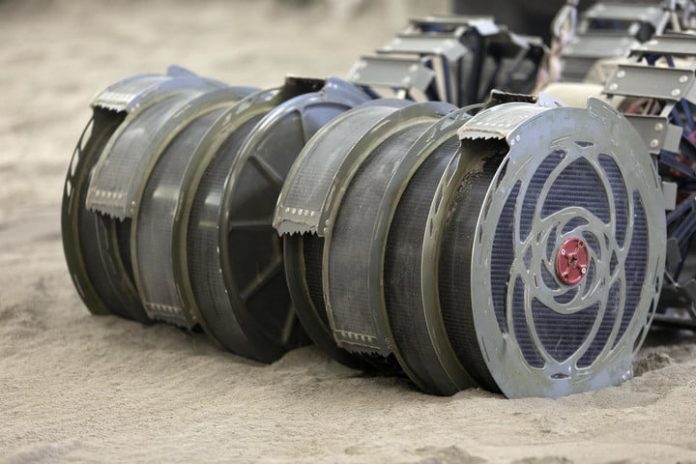 If you’re a designer or engineer who’s stuck at home and bored, then NASA has a challenge for you. The agency has developed a robot for digging on the moon, called Regolith Advanced Surface Systems Operations Robot or RASSOR, and it wants the public’s help in designing a part of it called the bucket drum. This part collects the soil, or regolith, from the surface of the moon and stores it securely. When the regolith has been transported to its destination, the bucket drum rotates to dump the material in the required location.

Currently, the bucket drums are hollow cylinders, one at each end of RASSOR. They have scoops which pick up the regolith by pulling it toward the center of the robot, so it can collect material from both front and back. This ensures that the robot doesn’t dig more at one end than the other, which would make excavating more difficult.

A close-up view of the bucket drums on Regolith Advanced Surface Systems Operations Robot (RASSOR) in the regolith bin inside Swamp Works at NASA’s Kennedy Space Center in Florida on June 5, 2019. NASA/Kim Shiflett

The problem with the current design of the bucket drums is that they are too heavy. The mechanism relies on the weight of the drums pushing down into the regolith to create traction and pick up material. And when it comes to space missions, every gram of weight saved is important.

So NASA is looking for suggestions for alternative mechanisms that could achieve the same collecting of lunar soil, but at a lighter weight. The challenge is to find “a better shape for RASSOR’s bucket drum and baffling, or sheet metal inside of it that can capture and hold more regolith.” The challenge will be hosted on GrabCAD, a site for designing and sharing 3D models.

“We’ve held challenges on GrabCAD in the past and they were very successful,” Jason Schuler, a robotics engineer in the Exploration Research and Technology Programs at NASA’s Kennedy Space Center, said in a statement. “As a repository for computer-aided design, the platform helps us reach professional designers, engineers, manufacturers, and students outside of the space industry who may have an idea that could benefit NASA.”

There is prize money totaling $7,000 for the top five submissions. To see more details and enter the contest, visit the GrabCAD site. “With RASSOR, we’re no longer relying on the traction or the weight of the robot. It is possible to excavate on the Moon or Mars with a really lightweight robot,” Schuler said. “RASSOR is excavation and transportation all in one, but we’d like to improve the design.”

While the Exynos 990-powered model isn't as powerful as the Snapdragon 865 version, the Note 20 Ultra is a fantastic
Read more

It is expected to be announced later this month, alongside two other new Redmi Note 9 series phones.What you need
Read more

The 'Theft and Loss' coverage will be an add-on subscription to existing Care+ plans.What you need to knowNew code strings
Read more

The update is expected to become widely available in all markets by next week.What you need to knowOnePlus 8T is
Read more