How to get free diamonds in The Seven Deadly Sins 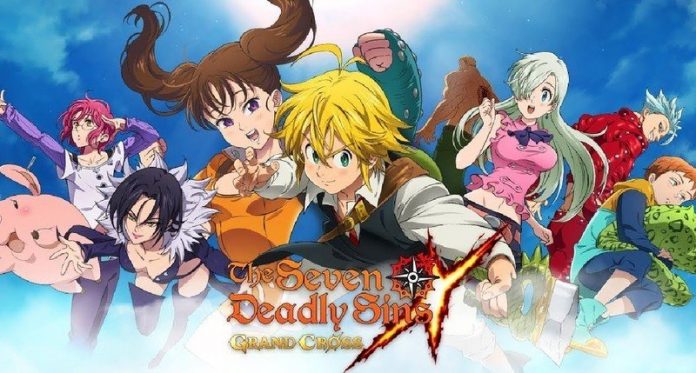 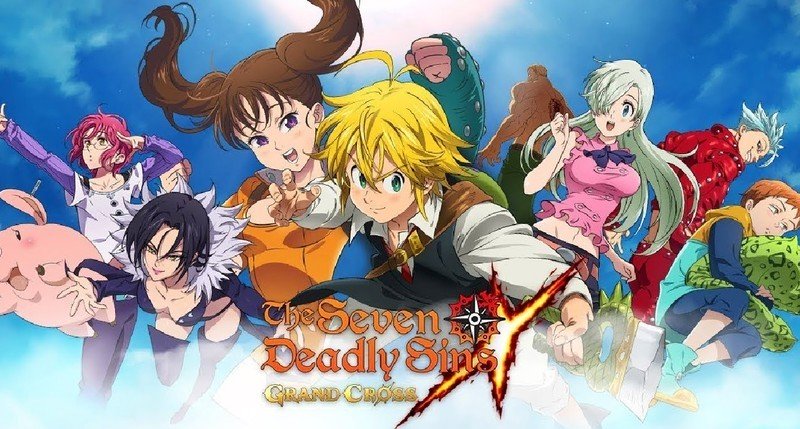 Why pay for Diamonds when you can get them for free?

Premium currency in free-to-play mobile games goes by a lot of names depending on what you’re playing, but diamonds are definitely a favorite gemstone for a lot of titles. Diamonds with a capital ‘D’ are the currency that matters most in The Seven Deadly Sins: Grand Cross, and Netmarble would probably not mind at all if you spent a few dollars to buy them from time to time.

Buying premium currency is fine if that’s your thing, but getting Diamonds for free is a lot more satisfying, not to mention a little easier on your virtual wallet. Assuming that sounds good to you, keep on reading, as there are a handful of methods for racking up Diamonds without saying goodbye to any of your dough.

What are Diamonds used for anyway? 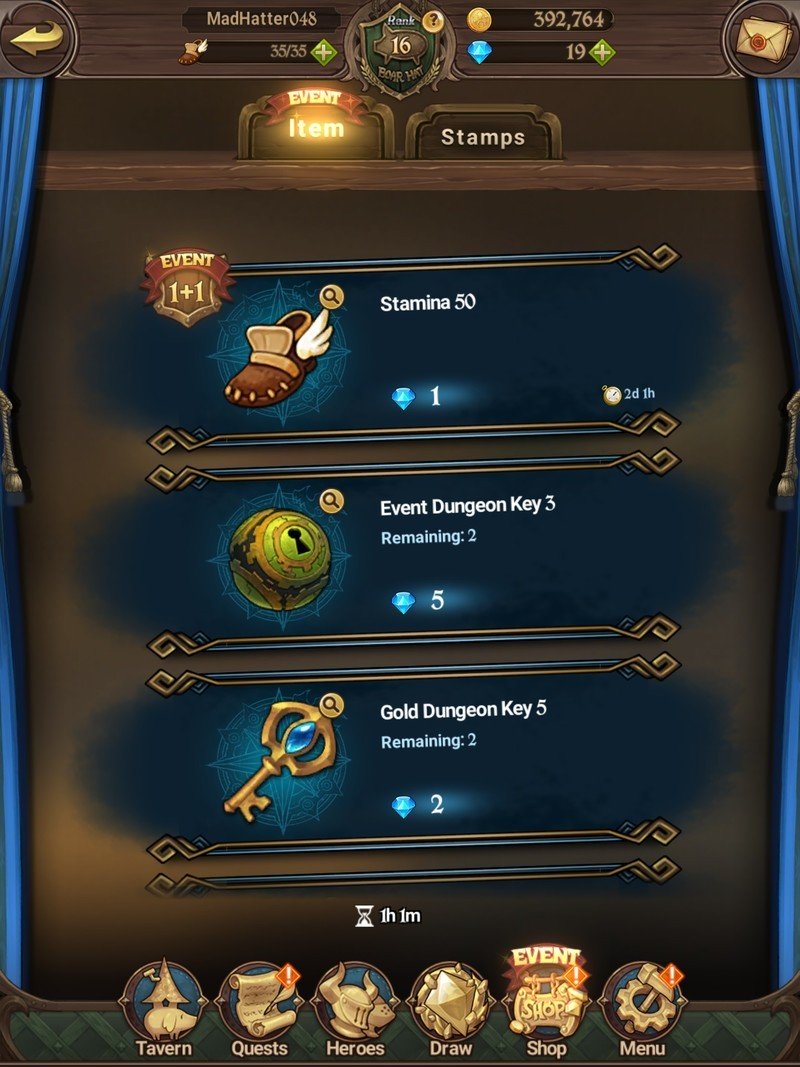 If you need something important in The Seven Deadly Sins: Grand Cross, there’s a good chance you can buy it with Diamonds. Tapping on the ‘Shop’ icon on the game’s main nav bar will take you to the in-game store, where the Item Shop offers plenty of useful items and the Sacred Treasue Shop waits to tempt you with rare customization gear.

But Diamonds have an even more important purpose, and that’s to purchase Draws where you receive new characters up to SSR rarity. You’ll find all currently available Draws by (wait for it … ) tapping the ‘Draw’ icon, including some that may only be around for a limited time. One Draw usually costs three Diamonds, but the better value is to save up 30 for an 11x Draw. In fact, unless you’re desperate for new heroes to add to your roster, it’s advisable to always do the 11x Draw for 30 Diamonds to get the extra character each time.

So that’s the “why” for Diamonds, but what about the “how”? We’ll start with the easiest possible way.

Get free Diamonds from daily rewards and check-in events 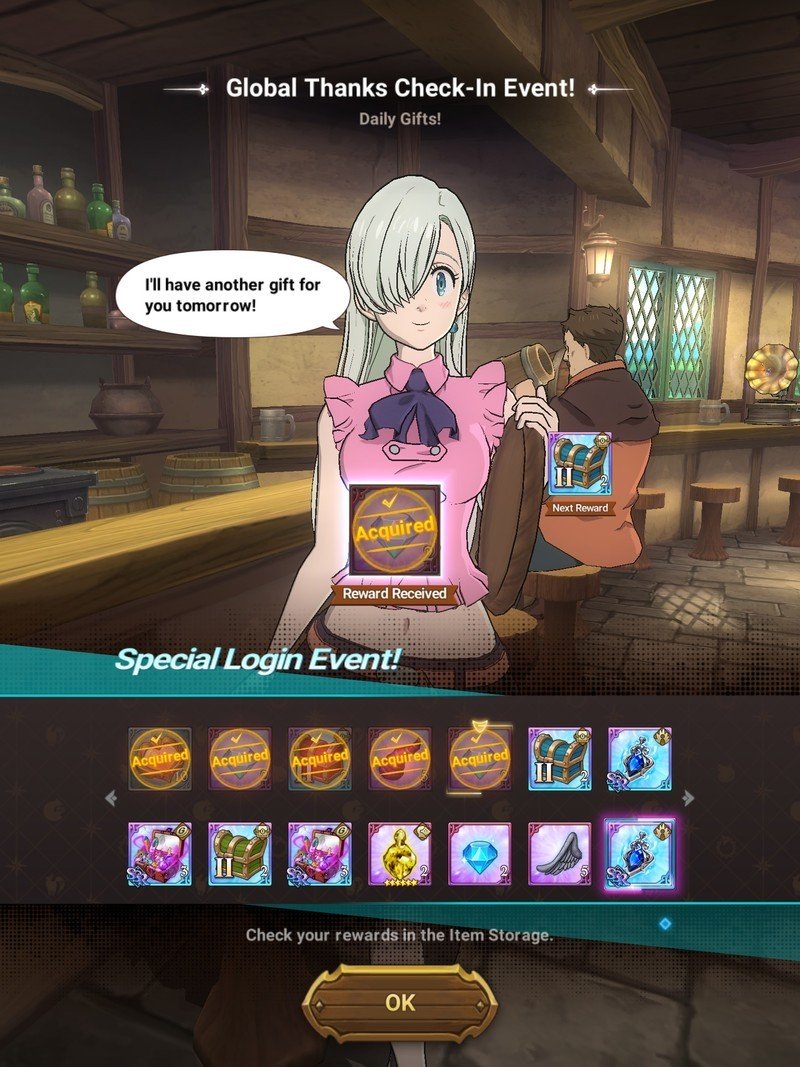 There’s nothing simpler than getting rewarded just for logging in. The Seven Deadly Sins: Grand Cross is hardly alone in that regard, and if you’re going to be a regular player, you should take that attitude to its logical extreme and log in every day.

The first time you talk to Elizabeth in the Tavern on any given day, she’ll give you a gift — a daily reward at minimum, and often another for a limited time check-in event. Rewards received this way vary, but you can count on getting free Diamonds every few days, and the game helpfully shows you the complete reward calendar so you’ll know exactly when.

You can also get Diamonds by completing achievements 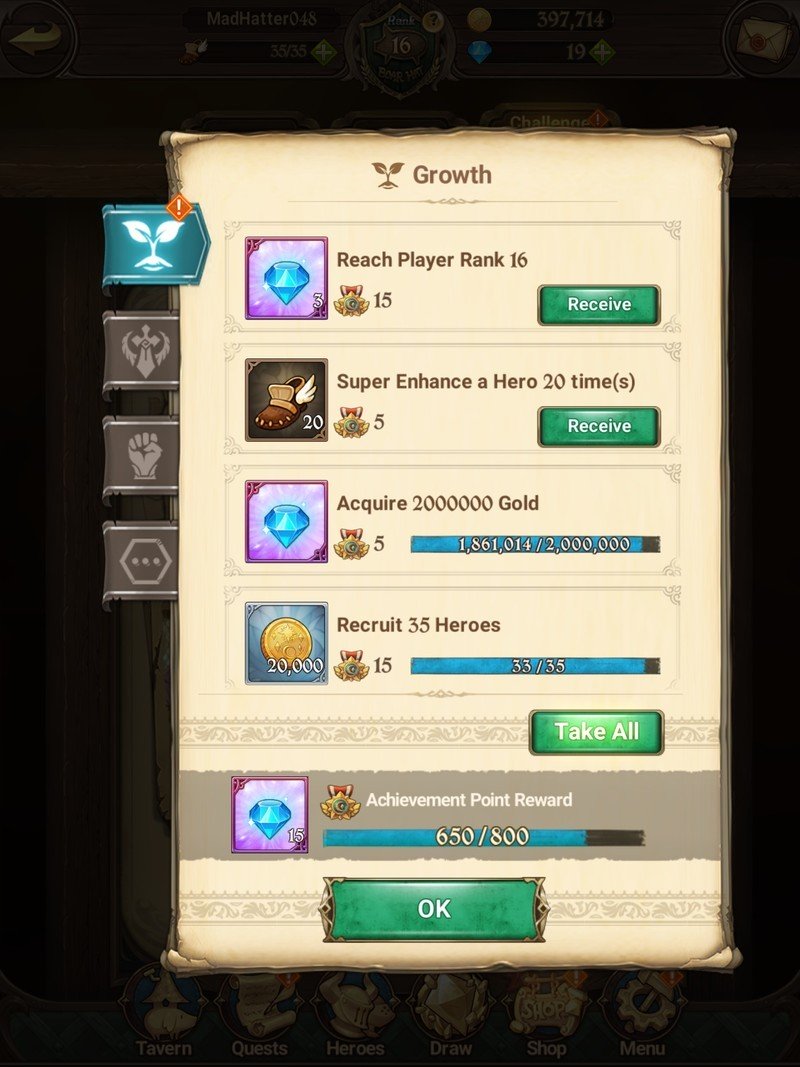 Achievements can be found under the ‘Challenge Task’ portion of the Quests menu, and are ongoing goals you are working toward while playing in most modes. There are several types of Achievements, including Growth, Adventure and Challenges, and you’ll receive a message on the screen when you’ve completed one.

While most Achievements grant other types of rewards, Growth Achievements often pay out in Diamonds. On top of that, every Achievement you knock out earns you Achievement Points which grant more free Diamonds at specific intervals. Look for the meter at the bottom of the Achievement tab to see how close you are to the next reward. 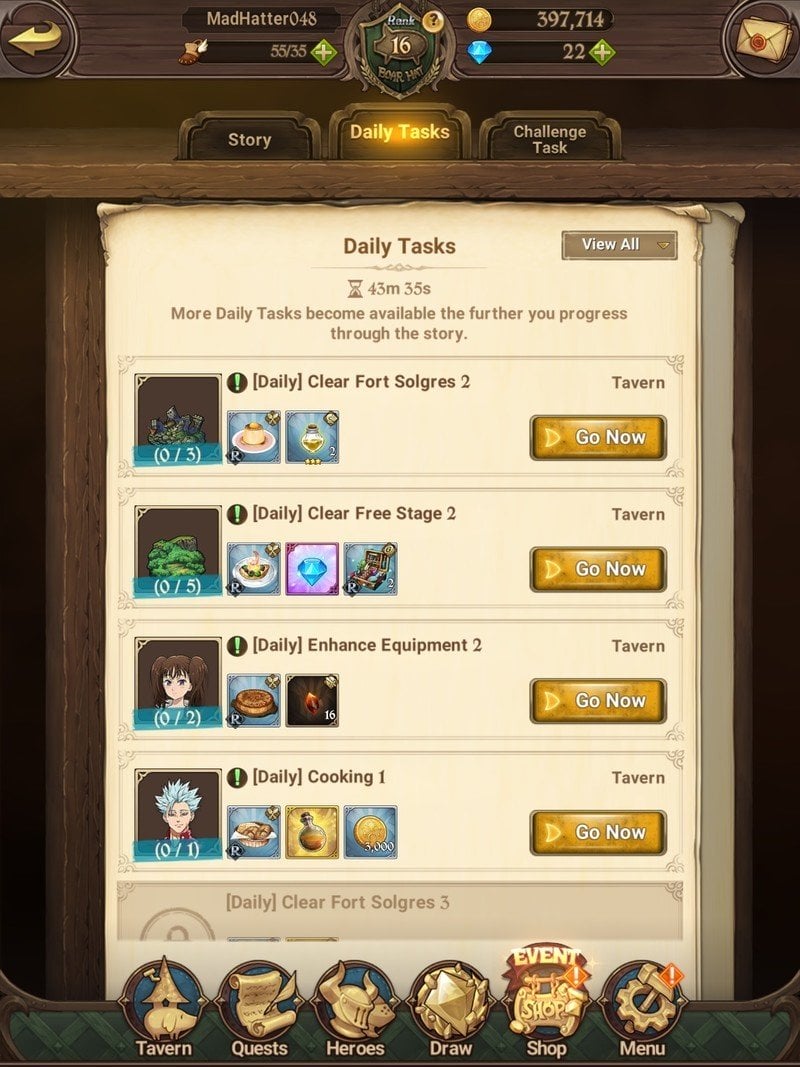 Yes, this sounds a little like we’re asking you to do chores, and no one likes those (except Hawk, who generally tackles removal of scraps with gusto). Daily Tasks can be found in aother tab in the Quests menu, and as the name implies, are things you can do once a day for rewards, with more unlocking as you advance farther in the game’s story.

Several Daily Tasks will eventually become available to you that give you a Diamond upon completion, like clearing Free Stages or taking part in the PVP Fight Festival. Just like logging in daily, it’s a good idea for regular Grand Cross players to finish off Daily Tasks as frequently as possible to avoid leaving any free Diamonds on the table.

Keep an eye out for Diamonds up for grabs in Events 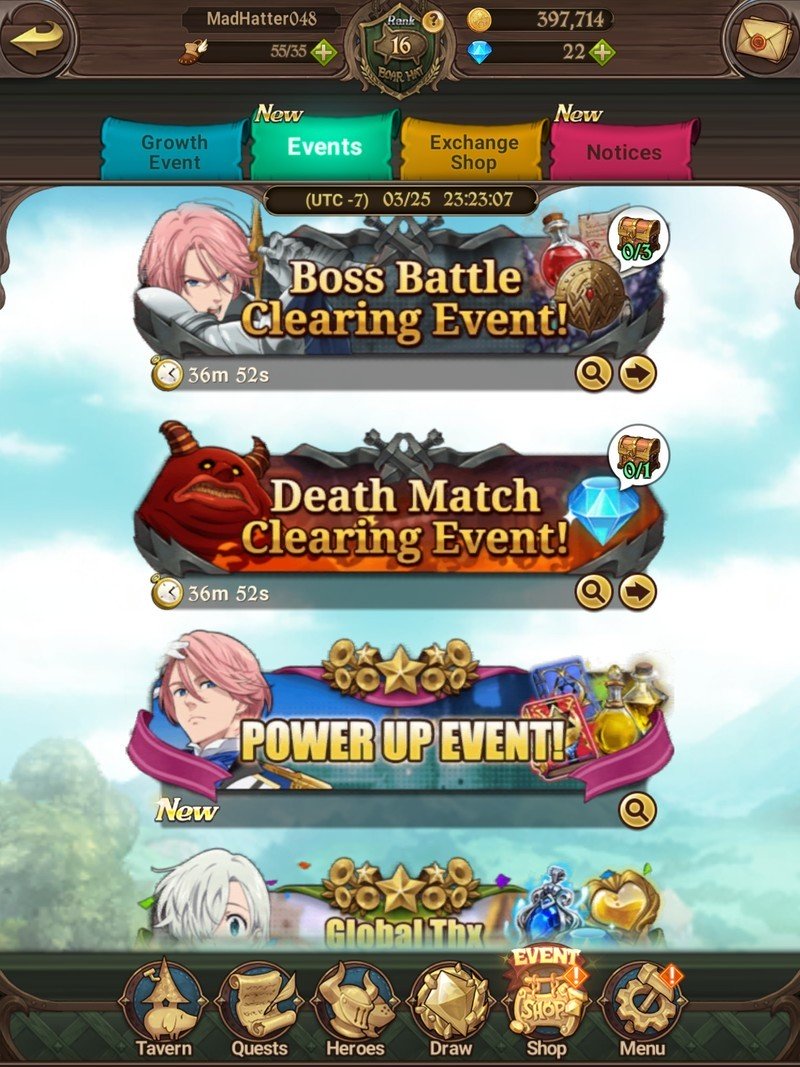 Tapping on the picture of Hawk near the upper-left corner of the Tavern screen is the fastest way to see what events are currently live in The Seven Deadly Sins: Grand Cross. There are typically a handful going on at any given time, and the developers helpfully mark the ones where you can earn Diamonds with a picture in the event’s banner. 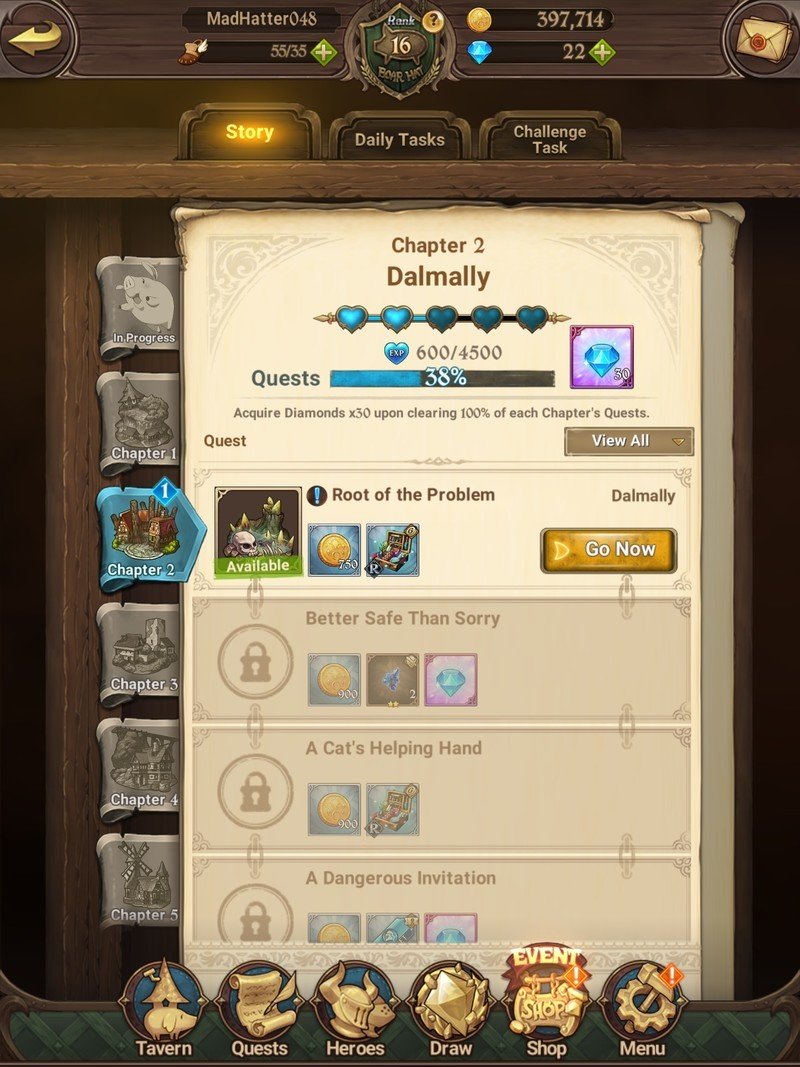 This is the grindiest way to earn free Diamonds, to coin a term, but it’s also worth the time. As you adventure through the main story, you’ll encounter a new village or town in every chapter, beginning with Vanya in Chapter 1. Each village has its own set of side quests you can pick up by talking to villagers, some of which chain into more quests. Finishing these quests raises the village’s affinity toward you, which in turn unlocks pop-up shops and other rewards.

However, completing 100% of the quests in any village gets you the real haul: 30 free Diamonds, enough to instantly go pull an 11x Draw. It takes a while to get there, but it’s really time more than effort since you’ll almost always be powerful enough to knock out these side quests without much trouble. As an added bonus, there is some extra flavor to the game world that you’ll only experience by spending extra time in each village.

Getting free Diamonds in The Seven Deadly Sins: A quick review

Even though most of the things we’ve gone over will only yield somewhere between one and five Diamonds, they definitely do add up over time, and it definitely feels worth it when you uncover an SSR character from an 11x Draw you didn’t have to pay to pull.

Here’s a recap of ways to get free Diamonds:

Log in daily to take advantage of daily rewards and check-in events.
Keep working to constantly complete Achievements, especially those under the Growth tab.
Whenever possible, do all your Daily Tasks, or at least the ones with Diamonds as rewards.
Watch the list of Events that reward you with Diamonds and make it a priority to complete them before they expire.
If you can spare the time, complete 100% of the quests in each village for a big 30 Diamonds.

Tell us more ways to get free Diamonds

Sometimes we overlook things while writing guides too, so if you see another way to earn free Diamonds, please let us know in the comments section. As well, if you are a beginner in the world of The Seven Deadly Sins: Grand Cross and need some pointers in other aspects of the game, read through our tips and tricks guide to get up to speed quickly. Good luck!