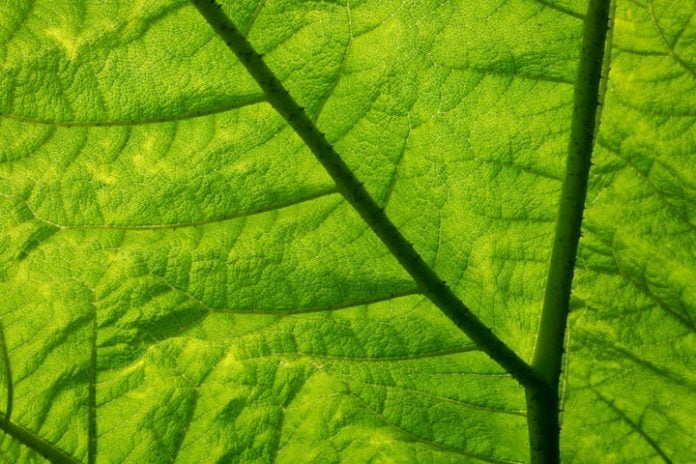 When viewed on a long enough timeline, most of our energy derives from the sun.

There’s solar power, the obvious example. Wind, too, is a product of the sun’s irregular heating of Earth’s air. Fossil fuels are little more than the disinterred remains of ancient photosynthetic organisms. And biofuels come from crops like corn, soybeans, and even seaweed — each of which relies on sunlight to grow.

Our dependence on fossil fuels is, of course, ruining the planet, and the jury is still out on the scalability and sustainability of many biofuels. But there are other ways to harness sunlight. Just look at the leaves of any plant. They might not look like much but within these thin, green slivers are living power stations, where abundant inputs automatically produce energy-rich outputs.

As demand for renewable energy sources increases, researchers have turned to leaves to develop a technology that replicates the process plants use to convert sunlight, water, and CO2 into energy. Called artificial photosynthesis, the technology could potentially provide clean and renewable fuel for the future. Just last month, the Department of Energy announced it would provide up to $100 million for artificial photosynthesis research in an effort to spark innovation in a technology that has so far struggled to make it out of the laboratory.

It probably won’t come as a surprise that artificial photosynthesis works much in the same way as natural photosynthesis, in which leaves suck up CO2 and use sunlight to convert the gas and water into sugars. Artificial photosynthesis isn’t an exact replica of its inspiration, however, because “plants are not optimal energy conversion machines,” according to Nathan Lewis, a chemist at the California Institute of Technology and principal investigator at the Joint Center for Artificial Photosynthesis, which the Department of Energy launched in 2010. As an example, Lewis points to the common color of plants.

“[Plants] should be black, not green, to absorb most of the colors in the solar spectrum,” he said, “And they have other constraints, too. They’re just good enough to do the functions they need to do biologically.”

At just one to two percent efficiency, typical crop plants are efficient enough to survive but relatively inefficient when it comes to producing fuels to power civilization. By improving on natural photosynthesis, Lewis thinks researchers will be able to create a technology that photosynthesizes at least ten times more efficiently than even the fastest plants.

The blueprint for photosynthesis has been around for billions of years and calls for just a few key components: light absorbers, catalysts, and a container to hold it all together. In plants, those roles are carried out by chlorophyll, enzymes, and a cell membrane.

“We basically need to store energy when it’s being produced so we can use it when we don’t have it available.”

In artificial photosynthesis, solar cells replace chlorophyll, absorbing sunlight and converting it into electricity. In that regard, the technology is already here. But creating catalysts to split water into oxygen and hydrogen pose a different challenge.

When it comes to catalysts, researchers have generally split into two camps—those like Lewis, who want to create inorganic catalysts using cheap metals, and those like Harvard professor of energy science Daniel Nocera, who want to put biology to work and use bacterial enzymes like those found in natural leaves. The various approaches used in different labs span the spectrum, said Lewis, from purely synthetic to entirely biological, including the use of genome editing to create black “Franken-plants,” that grow vigorously and produce fuel more efficiently than natural leaves. And although he and Nocera have been depicted as rivals in the race towards developing an artificial leaf, Lewis said, “They’re all valid approaches.”

A new kind of green energy

“The biggest problem with renewable energy sources like solar, wind, and hydro is that they’re seasonal or even daily,” she said. “We basically need to store energy when it’s being produced so we can use it when we don’t have it available.” The need to store surplus energy can cause challenges for the energy grid. California utilities sometimes pay utilities in neighboring states to take their excess solar electricity in order to stabilize their energy grids, Yang explained. “But if every state wants to move towards renewables, then we won’t have the option to give it away.”

So, what might artificial leaves look like? One idea is for photosynthetic tarps that can be rolled out “like the ground crew taking care of a baseball stadium before it rains,” said Lewis. Solar cells within the tarp would split water into more reactive compounds which, when fed into a tank full of catalysts, would convert CO2 into carbon-neutral chemical fuels that can be stored, shipped, or used on the spot.

One of the key promises of artificial photosynthesis is its potential to provide renewable energy for communities spread out within developing countries, which lack the infrastructure needed to store massive amounts of energy and stabilize power grids during periods of high production and peak demand. With artificial photosynthesis “there’s no need to set up that infrastructure,” Yang said. “If this technology can get to a point of commercialization…you don’t have to build huge infrastructure and transport chains in order to have this carbon neutral economy.”

That future is still years away. However, researchers continue to make steady, albeit slow, progress in the right direction and the recent promise of additional funding from the Department of Energy means the technology could soon see a much-needed boost in innovation. Lewis estimated that a workable model could be developed in the next couple years, with a commercial product arriving in the next decade or so.

That said, artificial photosynthesis is not a cure all for our energy woes. Experts estimate that we have about 10 years to get climate change under control—avoiding the worst impacts will require a swift shift towards clean, renewable energy. In other words, we can’t wait.

But thanks to nature, which has long inspired human invention, artificial photosynthesis may provide a piece to the puzzle of sustainable energy. From the humble leaf could grow a greener, cleaner fuel for the future.

Facebook
Twitter
Pinterest
WhatsApp
Previous articleMaking meat out of thin air? Impossible. But this startup does it anyway
Next articleReddit CEO warns against ‘parasitic’ TikTok, claims app is spyware