Because 2020’s not crazy enough, a robot mouth is singing A.I. prayers in Paris 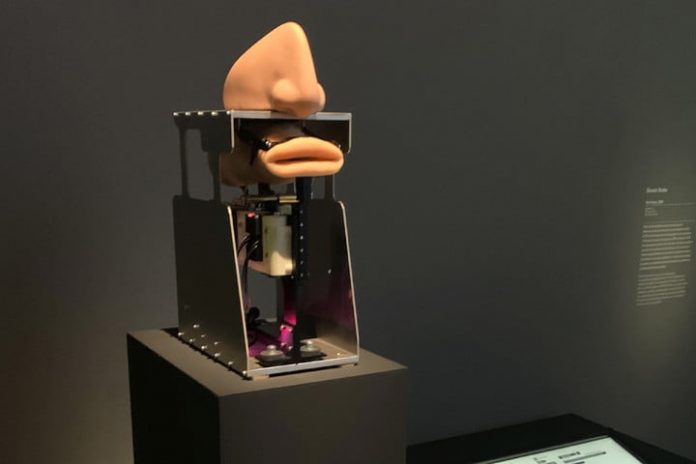 In these troubling, confusing times, it can be tough to know who to turn to for help. One possible answer? A disembodied robot mouth chanting algorithmically generated Gregorian-style prayers in the voice of Amazon’s Kendra.

Currently on display at the Centre Pompidou museum in Paris, but coming to the United States in the near future, The Prayer is a robotic installation created by Diemut Strebe, a visiting artist at MIT. Created in conjunction with researchers from CSAIL, MIT’s Computer Science and Artificial Intelligence Lab, it consists of a silicone nose and mouth, assorted robotic servos and motors, and some cutting-edge A.I. neural networks.

“For the artwork, we used a neural language model to learn the probability distribution, a mathematical function, over a sequence of words from text corpora,” Strebe told Digital Trends. “We assembled a large religious text database of all seven major practiced religions. We merged all [this] data into a kind of ‘one god or one religion’ database. The system infers word meaning and grammar rules from word distribution, by encoding this information in a mathematical structure, which is then utilized to generate natural language. The deep network is fine-tuned on sacred texts. As such, it abstracts key features from this specific genre to generate original prayers, with their peculiar lexicon and syntax.”

It then uses text-to-speech synthesis to turn those words in monastic-sounding audio in real time. The voice is synchronized to the lip movements, simulating the articulation of the prayers. “The prayers,” Strebe noted, “are the original creations of the machine.”

To its creator, The Prayer is an attempt to explore the concept of divinity and the mystery of the unknown through machine learning. “How would a divine epiphany appear to an artificial intelligence?” Strebe said. “[This] provocative question may sound absurd, but the focus of the project could maybe shed light on the difference between humans and A.I. machines in the debate about mind and matter, and allow a speculative stance on the future of humans in the age of A.I. technology and AGI [Artificial General Intelligence] ambitions.”

As explorations of computational creativity and the learning capabilities of A.I. go, The Prayer is certainly provocative. But it poses some interesting questions in the process. And, hey, isn’t provoking a reaction exactly what good (robo-)art should do?