Apple reportedly working on an AR headset with Vive-like controllers 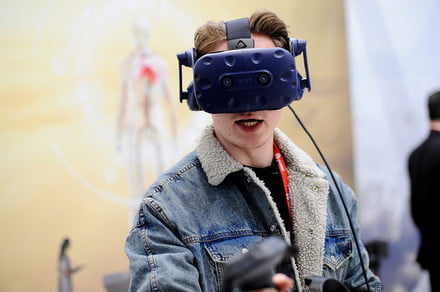 Apple has made its interest in augmented reality (AR) very clear in recent years, and rumors that the company is working on an AR headset have been making the rounds for a long time. Now, new evidence suggests Apple is closer than ever to finalizing these plans.

According to MacRumors, a leaked build of the upcoming iOS 14 operating system contains a photo of what seems to be a controller for an AR or virtual reality (VR) headset — or one that combines both, known as “mixed reality.”

It looks very similar to the controller used with the HTC Vive Focus, another VR headset that’s currently on the market. That’s significant because according to rumors, Apple has history with HTC. Bloomberg reported in 2017 that the two companies were working together on an AR headset. This latest photo could indicate that the partnership is alive and well.

Is that a customized HTC Vive Focus controller? Weird ???? I guess HTC are assisting Apple with AR tech? But why? https://t.co/IvuyQwNGwD pic.twitter.com/IdeU7ezumQ

Earlier in March 2020, 9to5Mac found code in an iOS 14 beta that indicated Apple was working on a new AR app code-named “Gobi.” While this app appears to be focused on iPhones — enabling AR experiences when people view products in the Apple Store, for example — it is thought Apple could be using it to test its mixed reality headset project.

MacRumors also believes Apple is trialing an AR crosswalk bowling game for its nascent headset. The app would allow you to play a virtual game of 10-pin bowling while waiting to cross the street. Currently, it can only be triggered at an intersection near 555 N. Mathilda Ave in Sunnyvale, California, which is just down the road from an Apple office known as “Mathilda 3.” The proximity to this office suggests this may be one location where Apple is developing its headset.

This would not be the first time Apple has reportedly worked with another company to produce an augmented or virtual reality headset. In late 2019, Apple was reported to be teaming up with Valve to make a mixed reality headset with a tentative 2020 release date. That is likely been pushed back due to the ongoing coronavirus pandemic, but the latest leak indicates Apple has lost no interest in developing its own headset in the near future.