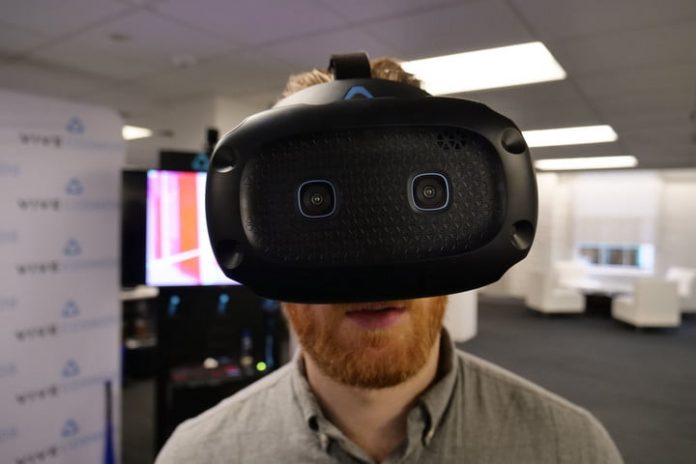 After having debuted the HTC Cosmos late last year with an innovative flip-up display to switch between the virtual and real worlds, HTC is expanding its Vive Cosmos series in a surprising new way. Faceplates with different features that can be upgraded to or purchased with the Cosmos.

The star of the show remains the different experiences you gain when adding HTC’s unique and modular faceplates. This allows users to grow with their Vive Cosmos investment by being able swap faceplates to gain new functionality in the future.

There are three new faceplates for the Cosmos: The entry-level Cosmos Play, the Cosmos Elite, and the Cosmos XR. These are in addition to the standard Vive Cosmos, which still sells for $699. The neat feature of these faceplates is that they can be swapped out for one another in mere seconds. That means if you want to upgrade to the Cosmos Elite, you don’t necessarily need to buy an entire new headset.

HTC is billing the Cosmos Elite as its most advanced VR headset, and rightfully so. It supports a number of add-on peripherals and accessories depending on how invested you are in the VR space. The headset, which retails for $899, comes as a bundle that includes HTC’s External Tracking faceplate. Although the Vive Pro is still being, the Cosmos Elite really feels like its spiritual successor.

While the original Cosmos shipped with a faceplate that relies on camera sensors for positioning, the External Tracking Faceplate delivers more precise tracking when used with the lighthouse base station. The precision will be welcomed by VR gamers who need more precise tracking of their movements for an even more immersive experience. In addition to the External Tracking faceplate, the Cosmos Elite will also work with the Vive and Vive Pro controllers, as well as HTC’s Wireless Adapter for untethered VR experiences.

And if you just want to update your Vive Cosmos to gain external tracking compatibility, HTC stated that the External Tracking Faceplate will be available as a stand-alone accessory apart from the Cosmos Elite bundle for $199 when it launches in the second quarter of this year.

HTC Vive Cosmos Play VR headsetThen there’s the Cosmos Play. It uses the original Cosmos’ inside-out tracking, but has just four cameras instead of six. It also has a more limited field of view, down from 210 degrees to 110.

The Play is described to be suited for VR titles like Angry Birds VR: Isle of Pigs, The Curious Tale of Stolen Pets, and A Fisherman’s Tale, and HTC envisions the affordable device to be an ideal fit for public VR experiences, like museum spaces.

The device is slated for a release in the coming months, though HTC did not release pricing information for its entry-level Cosmos Play at this time.

Lastly is the Cosmos XR for developers. The XR is available as both a stand-alone edition and faceplate upgrade. Interestingly, it brings passthrough cameras to the Vive Cosmos for the first time so that developers can work in a mix of VR and AR while creating.

The Vive Cosmos XR will be available as a developer kit in the second quarter at an undisclosed price.