Home News Why the star Betelgeuse has dimmed to just 36% of its normal...
News 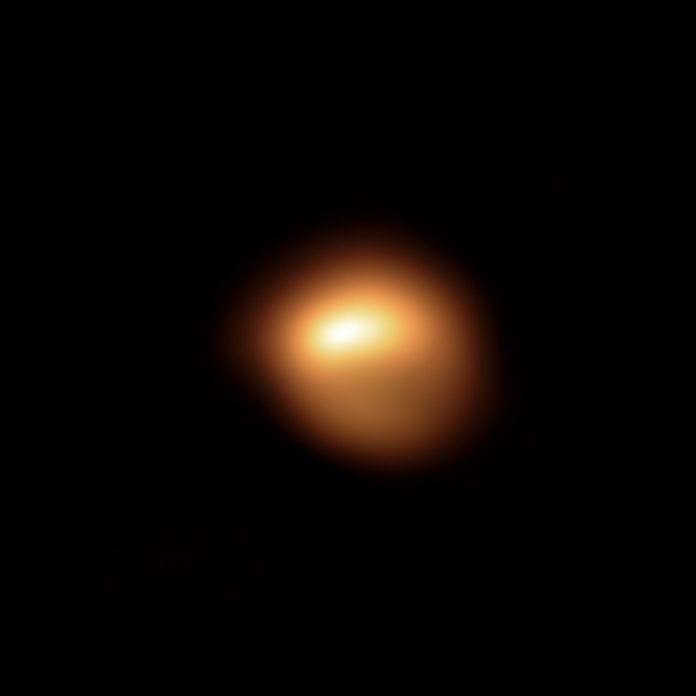 The red supergiant star Betelgeuse, in the constellation of Orion, has been undergoing unprecedented dimming. This stunning image of the star’s surface, taken with the SPHERE instrument on ESO’s Very Large Telescope late last year, is among the first observations to come out of an observing campaign aimed at understanding why the star is becoming fainter. When compared with the image taken in January 2019, it shows how much the star has faded and how its apparent shape has changed. ESO/M. Montargès et al.

Historically, one of the brightest stars in our sky has been Betelgeuse, a red supergiant located in the constellation of Orion. But late last year, astronomers noticed something strange about this familiar sight — it was dimming dramatically. It’s not unusual for stars to fluctuate between higher and lower levels of brightness, but in this case, the fluctuations were purely in one direction and extremely rapid. This lead many in the astronomical community to wonder if Betelguese may soon go supernova, reaching the end of its life and exploding in an enormous outburst.

Now, astronomers using the European Southern Observatory’s Very Large Telescope (VLT) have shown the dimming of this star with two images taken almost a year apart. The big news is not only that the star is dimming — it’s now down to just 36% of its typical brightness, which is noticeable even with the naked eye — but also that its shape is changing.

This comparison image shows the star Betelgeuse before and after its unprecedented dimming. The observations, taken with the SPHERE instrument on ESO’s Very Large Telescope in January and December 2019, show how much the star has faded and how its apparent shape has changed. ESO/M. Montargès et al.

The ESO astronomers don’t think that the dimming is related to an impending supernova, however. Instead, they think it is due to one of two possibilities. The first possibility is that, because Betelgeuse has an irregular surface consisting of enormous convection cells, these cells are moving, shrinking, or growing in a way that changes the brightness of the star. Alternatively, the star could be ejecting matter away from its core in the form of dust, creating clouds that block our view of its light.

“The two scenarios we are working on are a cooling of the surface due to exceptional stellar activity or dust ejection towards us,” Miguel Montargès, an astronomer at KU Leuven in Belgium, explained in a statement. “Of course, our knowledge of red supergiants remains incomplete, and this is still a work in progress, so a surprise can still happen.”

The VLT is armed with another instrument to study Betelgeuse during this unexpected dimming event, using the infrared wavelength as well as the visible light wavelength. The star has been imaged using VISIR, the VLT Imager and Spectrometer for mid-Infrared, which shows how the dust surrounding the star glows due to heat and radiation.

This image, obtained with the VISIR instrument on ESO’s Very Large Telescope, shows the infrared light being emitted by the dust surrounding Betelgeuse in December 2019. The clouds of dust, which resemble flames in this dramatic image, are formed when the star sheds its material back into space. The black disc obscures the star’s center and much of its surroundings, which are very bright and must be masked to allow the fainter dust plumes to be seen. The orange dot in the middle is the SPHERE image of Betelgeuse’s surface, which has a size close to that of Jupiter’s orbit. ESO/P. Kervella/M. Montargès et al., Acknowledgement: Eric Pantin

The process of shedding dust happens throughout the lifetime of stars like this one, with material being pumped out into space and eventually forming new stars.

“The phrase ‘we are all made of stardust’ is one we hear a lot in popular astronomy, but where exactly does this dust come from?” says Emily Cannon, a Ph.D. student at KU Leuven, said in the statement. “Over their lifetimes, red supergiants like Betelgeuse create and eject vast amounts of material even before they explode as supernovae. Modern technology has enabled us to study these objects, hundreds of light-years away, in unprecedented detail giving us the opportunity to unravel the mystery of what triggers their mass loss.”

If you're shopping for e-readers for family, as gifts for friends, or for yourself, be sure to take advantage of the Prime Day 2020 Kindle deals.
Read more

Apple is now rolling out the latest update for its browser for Mac, Safari 14 with a range of visual refreshes and a new privacy report tool.
Read more