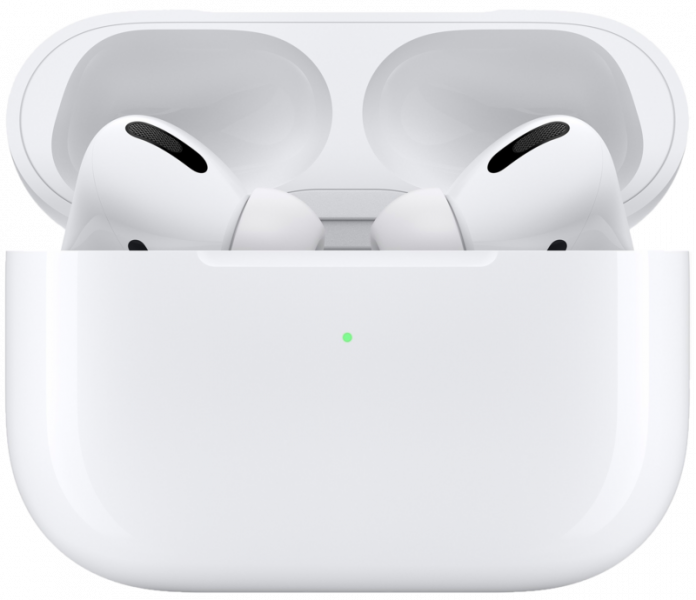 Both the Sony WF-1000XM3 and AirPods Pro are major updates to its previous counterparts and you can’t go wrong with either pair. It really just boils down to whether or not you care about ecosystem integration or customization. While the battery life with ANC enabled is pretty middle of the road, the AirPods Pro still has its advantages, such as great microphone quality and seamless integration with your Apple devices. 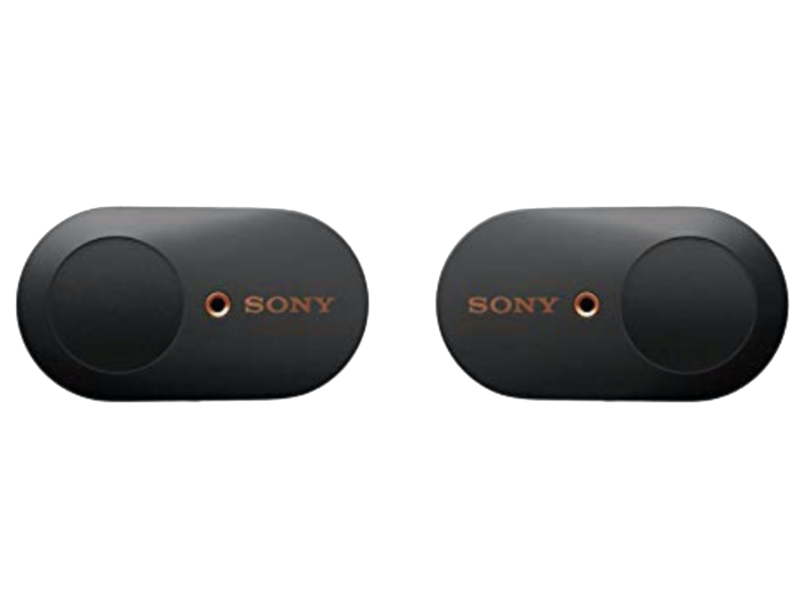 The WF-1000XM3 gets 2.5 hours more of battery life than the AirPods Pro with ANC enabled and are much more customizable than AirPods Pro on Android.

The Sony WF-1000XM3 feature better earbud battery life (six hours) with active noise cancelation (ANC) enabled. This is compared to the AirPods Pro, which only get 4.5 hours of audio playback with ANC enabled. Both buds get up to 24 hours of battery life with their included charging case and sound exceptional. Unless you’re clamoring for the additional battery life or better customization on Android, the AirPods Pro pull ahead.

But why are the AirPods Pro better? 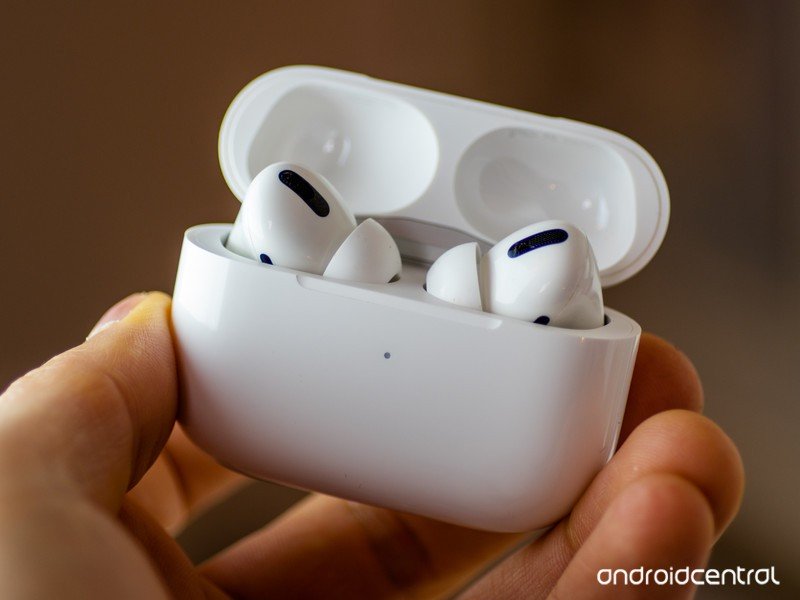 The WF-1000XM3’s case uses USB-C for wired charging and doesn’t feature wireless charging, while the AirPods Pro’s case charges uses Lightning for wired charging and features wireless charging via the Qi standard. It’s worth noting that the WF-1000XM3’s charging case is notably larger than the AirPods Pro case and may not fit in some people’s pockets, especially if you’re planning to carry more than just your earbuds in your pocket.

Both buds feature transparency/ambient sound modes, which let you pump in the environment around you without having to remove your earbuds. The WF-1000XM3’s ambient sound mode is decent, picking up environmental noise that is within close vicinity of you. However, the WF-1000XM3 makes it obvious you’re wearing in-ear earbuds as you get that sensation of having something shoved in your ear. It has quite a bit of digital artifacting and can sometimes sound unnatural.

Unless you absolutely need the additional 2.5 hours of battery life from the Sony WF-1000XM3s, it’s hard not to recommend the AirPods Pro.

On the other hand, the AirPods Pro’s transparency mode is the best we’ve heard on a set of earbuds, sounding very natural and true to life. Unlike other earbuds such as the WF-1000XM3, the AirPods Pro’s ambient sound mode sounds like you don’t have anything in your ear at all. The WF-1000XM3 duck the audio you’re listening to instead of pausing it entirely, while the AirPods Pro only briefly ducks the audio to play a chime signifying it’s switching modes. Neither earbuds offer an option to completely pause audio playback when transparency/ambient sound mode is enabled.

Comfort on the AirPods Pro is excellent. Unlike other in-ear earbuds that feature a “stem” where the rubber tip gets inserted, the AirPods Pro use a custom locking mechanism allowing the entire tip to mold around your ear. It also removes the feeling of an earbud being shoved in your ears. The physical bud itself is larger than the previous generation AirPods, despite the stem being much shorter.

The WF-1000XM3 are above-average in terms of comfort. They have a fairly large footprint and protrude from your ear quite a bit. While you won’t feel any sort of heaviness or fatigue in your ear, the WF-1000XM3 do have a tendency to fall out of your ear, which means they aren’t all that stable. 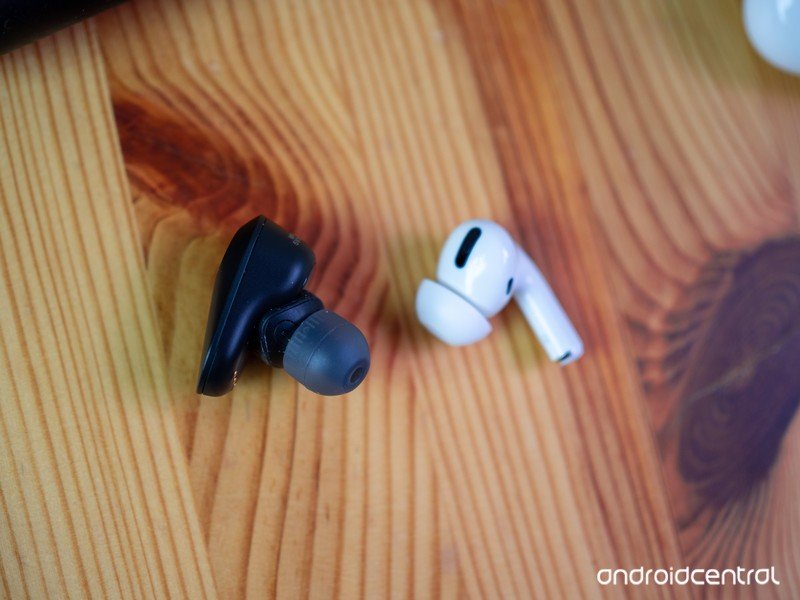 Microphone quality is where things get super interesting. The WF-1000XM3 are notoriously known for having poor microphone quality when talking over the phone, with you often sounding muffled to the other person. The AirPods Pro follow suit with the original AirPods (and 2nd generation) in this department, so the microphone quality is superb. It’s one of the best we’ve heard on a wireless headphone, let alone true wireless earbuds. The AirPods Pro are able to block out background noise and boost your own voice with minimal digital artifacting. There still is a bit of wind noise with the AirPods Pro, but it has been reduced a considerable amount.

The sound quality on the WF-1000XM3 is solid. The sound signature is relatively flat and neutral in the midrange and treble. It does, however, have a more boosted bass compared to the AirPods Pro, which gives them an overall darker sound signature. The soundstage is wide compared to other truly wireless earbuds and dynamic range is decent given that they are a pair of ANC earbuds. However, the WF-1000XM3 struggle a bit in the treble with ANC enabled, rolling off super early and making the overall treble feel recessed. The good news is that the WF-1000XM3’s sound signature can be customized in the earbuds’ companion smartphone app.

The AirPods Pro sound signature is much improved over the previous generations of AirPods, which was a low bar to begin with. The AirPods Pro feature a neutral and flat all-around sound with a minor bump in the upper-mids and lower-treble, which gives them a forward and airy sound. This means that sounds such as female vocals will be pushed forward. The soundstage is narrow but is still spacious, and instrument separation and dynamic range is decent given they are a pair of ANC earbuds. 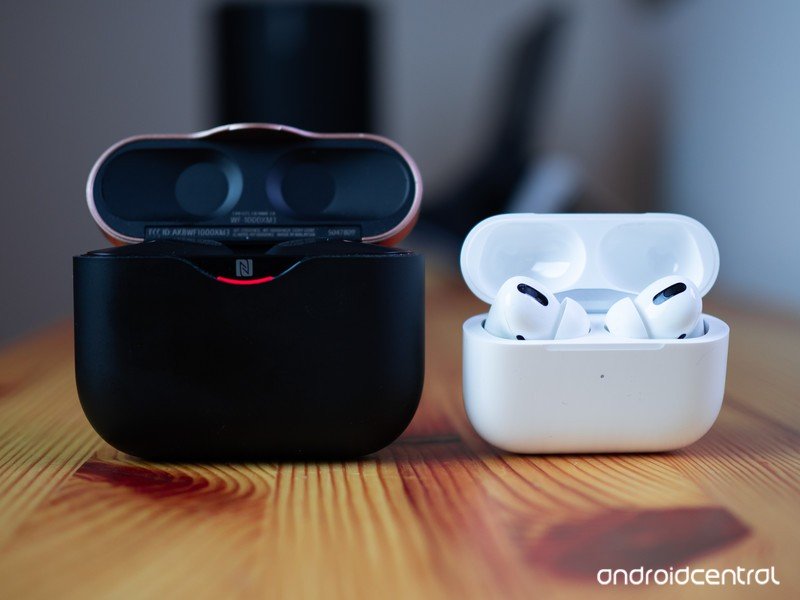 Finally, you can’t talk about Apple products without talking ecosystem. It’s what makes them unique compared to other true wireless earbuds. Just like older generations of AirPods, the AirPods Pro have one-tap pairing with all of your Apple devices signed into the same Apple ID. You’ll also get hands-free Siri support, and with the latest iOS 13.2 update, your AirPods Pro are now capable of reading and replying to your iMessage/text messages right in your ear. Unfortunately, you’ll lose all of these features when pairing to a non-Apple device.

Microphone quality is where things get super interesting.

The AirPods Pro also feature a force button instead of a double-tap gesture from older generation AirPods. This mostly follows the old “iPod” style media controls (single tap for play/pause/answer a call, double tap to skip forward, and triple tap to skip backward). You’ll also have an extra tap and hold gesture to toggle between ANC and transparency mode. These features will still work even when paired with non-Apple devices.

While the WF-1000XM3 won’t have that level of integration, they have their fair share of smart features. For example, they can summon the Google Assistant with a tap and hold on the right earbud. The WF-1000XM3 don’t mirror controls like the AirPods Pro do, meaning the left earbud is dedicated to toggling through ANC, ambient sound, and ANC off, while the right earbud houses your media controls (same control scheme as AirPods Pro). Fortunately, unlike the AirPods Pro, the WF-1000XM3’s earbuds can be used independently on Android, something the AirPods Pro aren’t capable of unless paired to an Apple device. Besides that, it shares the same auto-play/pause, ambient sound mode, and ANC features as the AirPods Pro. Neither earbuds have buttons or gestures for volume control, forcing you to bring up your digital assistant or pull out your device to change the volume.

However, the WF-1000XM3 have a companion app that’s available on Android (and iOS). The app is fairly basic but presents itself decently well. Within the app, you can adjust the amount of ANC you’d like pumping in, even allowing you to specifically boost voices with ANC enabled. You’ll also be able to customize the sound signature with a fairly basic five-band equalizer and update the WF-1000XM3’s firmware. If you’re looking to simply add some bass or treble, the app will serve you well. However, if you’re looking to fine-tune the buds and change specific frequencies, you’re out of luck here.

Which one should you buy?

In the end, unless you absolutely need the additional 2.5 hours of battery life from the Sony WF-1000XM3s, it’s hard not to recommend the AirPods Pro. Their convenience with the wireless charging case, paired with the ridiculously easy device switching (even on non-Apple devices), on top of excellent sound quality, comfort, and ANC make them a solid set of earbuds for almost everyone.

The biggest issue with AirPods Pro are their lackluster support on non-Apple devices. You won’t be able to change your squeeze options (from the default ANC/transparency to any combination of ANC, transparency, and off) or run the ear tip fit test. In addition, you won’t be able to use the earbuds independently of one another, meaning audio will play out of both earbuds even if one is in the case, draining the battery. You also won’t be able to adjust the sound signature whether you have an iPhone or an Android device, so what you hear is what you get unless you download a third-party EQ app. If any of that is important to you, consider the WF-1000XM3.

If you’re looking for a companion to your true wireless earbuds, check out our best wireless headphones list.

They were the go-to recommendation for truly wireless ANC earbuds. While the AirPods Pro have beat it out, they’re still solid contenders, especially if you want longer battery life or customization. 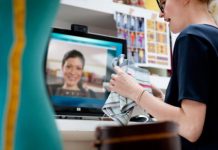 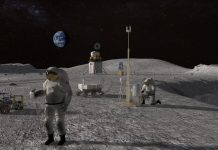 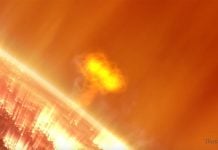