State of the Union: Trump reaffirms desire to see U.S. put a flag on Mars 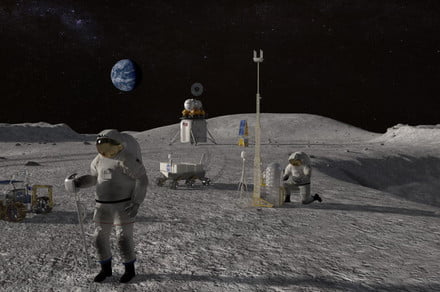 During his State of the Union address on Tuesday, February 4, President Trump reaffirmed his determination to ensure that the U.S. becomes “the first nation to plant a flag on Mars.”

The president called on Congress to green light the necessary funds for NASA’s Artemis space program to make a crewed trip to Mars possible, as well as an earlier mission to put the next man and first woman on the moon.

“In reaffirming our heritage as a free nation, we must remember that America has always been a frontier nation, and now we must embrace the next frontier, America’s manifest destiny in the stars,” Trump said in his address.

“I am asking Congress to fully fund the Artemis program to ensure that the next man and the first woman on the moon will be American astronauts, using this as a launching pad to ensure that America is the first nation to plant a flag on Mars.”

In March 2019, Trump’s administration directed NASA to commit to sending American astronauts to the moon by 2024. Two months after the announcement, NASA Administrator Jim Bridenstine revealed the program would be named Artemis.

“Similar to the 1960s, we too have an opportunity to take a giant leap forward for all of humanity,” Bridenstine said in a statement last year.

The White House said in May 2019 that it wanted to increase NASA’s fiscal 2020 budget by $1.6 billion to help make the moon landing happen. Up until now, $600 million has been approved for the astronauts’ moon landing system, though the space agency is hoping for a 2021 budget even greater than $600 million to keep the ambitious project on course.

NASA has already announced partnerships with 14 commercial space companies — SpaceX and Blue Origin among them — that could lead to direct involvement in the Artemis program.

Those who make the final selection will use their technology to take various pieces of equipment to the moon starting in 2021, with the payloads expected to comprise kit such as rovers, power sources, and science experiments. The equipment will enable scientists to study the lunar surface and develop the necessary technologies for eventual crewed trips to Mars — and possibly beyond.

NASA is currently working on a next-generation launch system called Space Launch System, or SLS, for its future space trips, and last year it unveiled newly designed spacesuits that its astronauts will wear for the moon mission, hopefully in 2024.