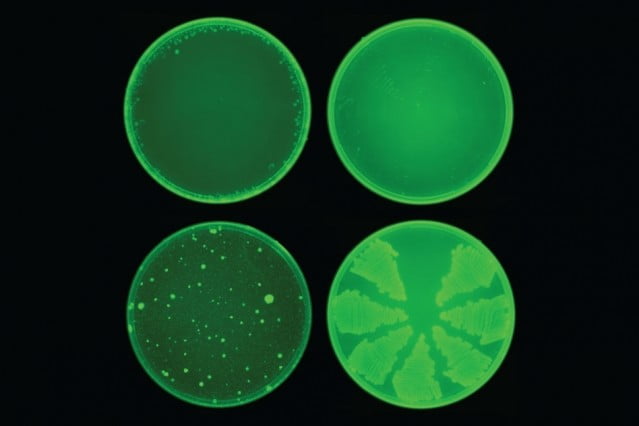 Researchers at MIT have used artificial intelligence to develop a new antibiotic compound that can kill even some antibiotic-resistant strains of bacteria. They created a computer model of millions of chemical compounds and used a machine-learning algorithm to pick out those which could be effective antibiotics, then selected one particular compound for testing and found it to be effective against E. coli and other bacteria in mouse models.

MIT researchers used a machine-learning algorithm to identify a drug called halicin that kills many strains of bacteria. Halicin (top row) prevented the development of antibiotic resistance in E. coli, while ciprofloxacin (bottom row) did not. courtesy of the Collins Lab at MIT

“We wanted to develop a platform that would allow us to harness the power of artificial intelligence to usher in a new age of antibiotic drug discovery,” James Collins, Professor of Medical Engineering and Science in MIT’s Institute for Medical Engineering and Science, said in a statement. “Our approach revealed this amazing molecule which is arguably one of the more powerful antibiotics that has been discovered.”

This new approach to drug development can make identifying different compounds to which bacteria are resistant faster, and for considerably less expense than other approaches. The researchers trained their computer model on 2,500 existing molecules, and then tested it on a library of 6,000 compounds to identify molecules which could kill E. coli bacteria. The model identified one particular molecule as a potential target, and when the researchers tested it in the lab they found it could also kill other treatment-resistant bacteria like Clostridium difficile, Acinetobacter baumannii, and Mycobacterium tuberculosis.

There is also a growing problem of antibiotic-resistant bacteria, which have evolved due to over-prescription of antibiotics and overuse of the drugs in farming, for example. New approaches to drug development can help tackle this problem. “We’re facing a growing crisis around antibiotic resistance, and this situation is being generated by both an increasing number of pathogens becoming resistant to existing antibiotics, and an anemic pipeline in the biotech and pharmaceutical industries for new antibiotics,” Collins said.

The researchers plan to use their model to optimize existing drugs as well as developing new ones. “This groundbreaking work signifies a paradigm shift in antibiotic discovery and indeed in drug discovery more generally,” Roy Kishony, a professor of biology and computer science at Technion who was not involved in the study, said in the statement. “Beyond in silica screens, this approach will allow using deep learning at all stages of antibiotic development, from discovery to improved efficacy and toxicity through drug modifications and medicinal chemistry.”