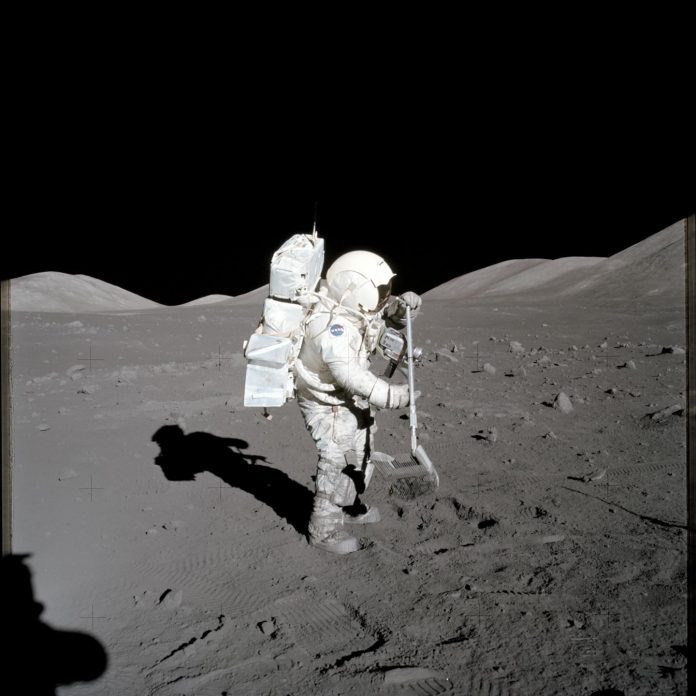 When the Apollo 17 mission landed in 1972, it brought back the last sample of moon dust the earth would see for almost 50 years. In order to get as much use out of this precious 111-kilogram sample as possible, researchers have found a new way to analyze the dust by looking at single grains.

“We’re analyzing rocks from space, atom by atom,” Jennika Greer, the paper’s first author and a Ph.D. student at the Field Museum and University of Chicago, explained in a statement. “It’s the first time a lunar sample has been studied like this. We’re using a technique many geologists haven’t even heard of.”

Apollo 17 astronaut and geologist Harrison Schmitt in 1972 collecting samples of lunar soil that would later be used in this study. NASA

The technique, called atom probe tomography, analyzes single grains which are about the width of a human hair. Using a focused beam of charged atoms, tiny carvings can be made into a moon dust grain. This process knocks atoms off the sample which can be analyzed one by one. Heavier atoms like iron take longer to reach a detector than lighter ones like hydrogen, so the researchers can see the exact composition of the sample.

With information about the atomic makeup of the sample, the team could reconstruct the sample with different colors for each atom to create a “nanoscale 3D map” of the moon dust.

“We can apply this technique to samples no one has studied,” said Philipp Heck, co-author of the paper. “You’re almost guaranteed to find something new or unexpected. This technique has such high sensitivity and resolution, you find things you wouldn’t find otherwise and only use up a small bit of the sample.”

Analyzing moon dust this way allows researchers to see the differences between areas that have been bombarded by cosmic radiation and those which have not. The soil on the surface of the moon is quite different from the rock beneath due to this radiation exposure.

The technique could be used to analyze future space samples as well. “It’s great for comprehensively characterizing small volumes of precious samples,” Greer said. “We have these really exciting missions like Hayabusa-2 and OSIRIS-REx returning to Earth soon — uncrewed spacecraft collecting tiny pieces of asteroids. This is a technique that should definitely be applied to what they bring back because it uses so little material but provides so much information.”

The findings are published in the journal Meteoritics & Planetary Science.