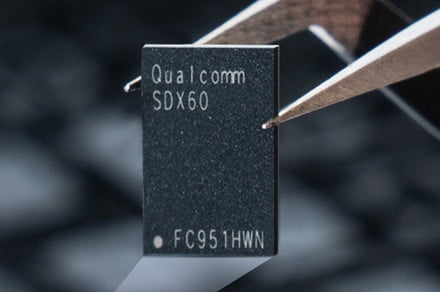 Qualcomm is bringing the 5G connectivity in today’s phones to the next level: The company has announced the new Qualcomm X60 modem, which Qualcomm says will help bring 5G into the mainstream through a new generation of flagship smartphones.

5G in general is likely to take off in 2020. Carriers including Verizon, AT&T, and the new T-Mobile/Sprint are finally widely rolling out their 5G networks, and smartphone manufacturers like Samsung are beginning to build 5G into their smartphones by default — rather than offering a special 5G-enabled version of a device that costs a lot extra.

Here at #SamsungEvent for #Unpacked2020. @Qualcomm in full force to support our congratulate our awesome partners from @SamsungMobile ????. #5GisHere. pic.twitter.com/sRAZPm4W6q

The X60 is Qualcomm’s 3rd-generation 5G modem, and offers a few features over previous-generation 5G modems. For example, the modem is built on a 5-nanometer process — down from 7 in previous-generation modems. Not only that, but the modem offers features like millimeter-wave-sub6 spectrum aggregation. The result? You’ll get faster 5G connectivity, that can more easily switch between different types of 5G waves, and take advantage of the connections that are available. According to Qualcomm, the modem will deliver download speeds of up to a whopping 7.5 gigabits per second, and upload speeds of up to an impressive 3 gigabits per second — though the speeds you get will obviously vary widely depending on things like what your carrier offers and how many people are connected to the cell tower.

The X60 modem also comes with Qualcomm’s new QTM535 antenna module, which is built to offer better millimeter-wave performance. The antenna design is sleeker and more compact than previous-generation antennas, freeing up space inside a phone for other things, or allowing companies to make slimmer devices. (Although companies like Apple think it isn’t small enough.)

“Qualcomm Technologies is at the heart of 5G launches globally with mobile operators and OEMs introducing 5G services and mobile devices at record pace,” said Qualcomm in a statement. “As 5G standalone networks are introduced in 2020, our third-generation 5G modem-RF platform brings extensive spectrum aggregation capabilities and options to fuel the rapid expansion of 5G rollouts while enhancing coverage, power efficiency and performance for mobile devices.”

Qualcomm says the X60 modem will ship to manufacturers in the first quarter of 2020, and is expected to be available in commercial devices in early 2021. Because of the timeline, we expect the modern to ship alongside the next-generation Qualcomm mobile platform, which will be a follow-up to the Snapdragon 865.