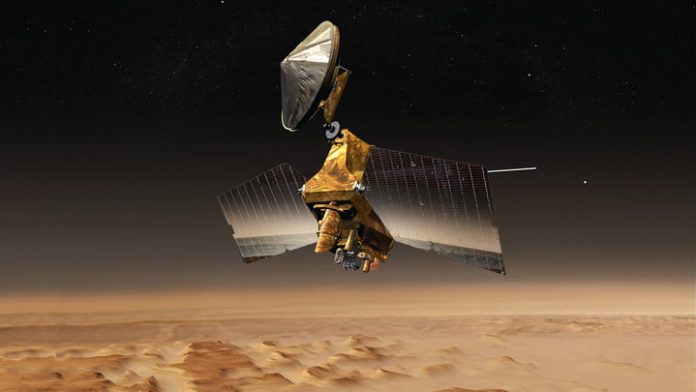 It might be the Mars rovers like Curiosity and the upcoming Mars 2020 which get the most attention, but spacecraft in orbit around the planet play a vital role in scientific investigations of Mars as well. One of the busiest Mars orbiters has been NASA’s Mars Reconnaissance Orbiter (MRO), which was launched in 2005 and arrived at the red planet to begin investigations in 2006. Since then, it has sent back to Earth over 371 terabits of data.

Now, the MRO is taking a short break, going on an almost two-week hiatus from its science mission for maintenance to be performed. “The maintenance work involves updating battery parameters in the spacecraft’s flash memory — a rare step that has been done only twice before in the orbiter’s 15 years of flight,” NASA explained in a blog post. “This special update is necessary because it was recently determined that the battery parameters in flash were out of date and if used, would not charge MRO’s batteries to the desired levels.”

Other maintenance tasks to be performed during the period of February 17 to February 29 include updating the orbiter’s data about planetary positions and swapping from its main computer, called the Side-A computer, to its redundant computer, called the Side-B computer. Switching hardware and updating the flash memory periodically helps to avoid problems caused by years of use in an environment of harsh cosmic radiation.

In its studies so far, the MRO has snapped pictures of both of NASA’s missions to Mars’s surface, Curiosity and InSight, and has helped to image the path that the Curiosity rover will take up Mount Sharp over the next few years. It has also played an important role in the upcoming Mars 2020 mission, helping to identify and image the landing site for the rover, called the Jezero Crater.

As well as assisting in exploratory missions, the MRO has also contributed to scientific discoveries such as the finding of easily accessible water beneath the planet’s surface. The MRO also gained some degree of fame last year when it took a picture of a structure on Mars created by the interaction of winds and dust dunes which looked remarkably like the Star Trek logo.