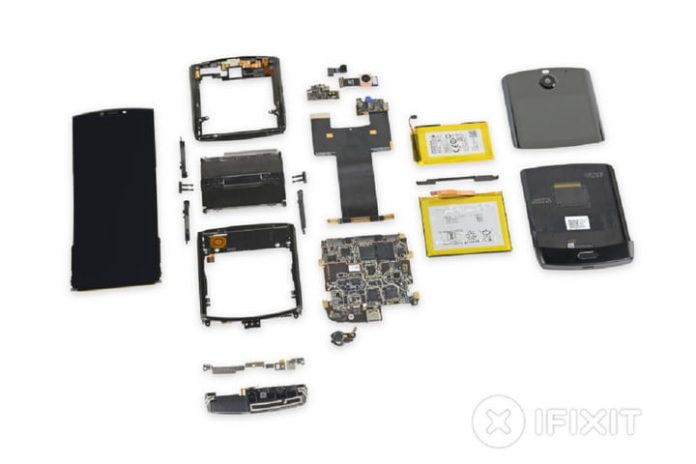 iFixit’s disassembly of the new Motorola Razr revealed a $1,500 device that most owners should not try to repair by themselves.

iFixit struggled in its teardown of Motorola’s folding smartphone, due to components that include glued-on outer covers and a charging port that is soldered directly to the phone’s mainboard. iFixit also found that replacing the Razr’s batteries require almost total disassembly of the device, and called out “complex construction and multiple flex cable booby traps” that will make it very difficult to perform self-repairs on the device.

In the process of the teardown, iFixit discovered a gap between the Razr’s hinge and display on each side, which was an issue in the first batch of Galaxy Fold units. This may not be a problem since the gap is not seen when the Razr is completely opened, but the risk is certainly there.

iFixit also noted the difficulty of replacing the Razr’s foldable display, but Motorola will only charge $299 for the service.

The Motorola Razr was described by iFixit as the “most complicated phone-based contraption we’ve ever taken apart.” The device earned a repairability score of 1, the lowest score possible and even lower than the 2 scored by the Samsung Galaxy Fold. iFixit, however, understands that this is a first-generation design, so repairability may still improve in future versions, while coming away impressed with the “numerous feats of engineering” that went into reviving the Razr.

The Razr has been previously subjected to teardowns and durability tests, returning results of a complicated device with concerns about how long it will last. A fold test from CNET, carried out by the FoldBot, revealed that the Razr started struggling to properly close after 27,000 folds in three-and-a-half hours. Motorola, however, said in a statement to Digital Trends that the FoldBot was not designed to test the Razr, so CNET’s test was not a good example of the device’s real-world performance.

In any case, the Motorola Razr may find itself in trouble with the launch of the Samsung Galaxy Z Flip, which Digital Trends’ Corey Gaskin describes as a better smartphone “in just about every way,” including design, durability, and performance, for a slightly lower price of $1,380.