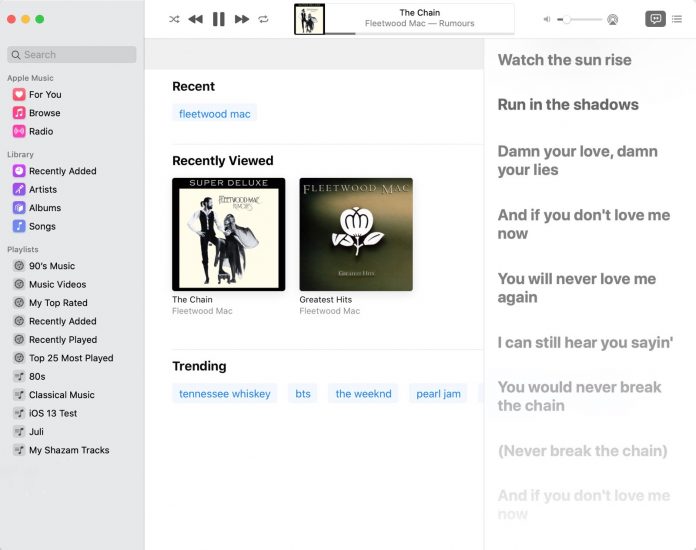 The second beta of macOS Catalina 10.15.4 was released today, and the new update introduces support for time-synced lyrics in the Apple Music app.

‌Apple Music‌ for Mac previously provided access to lyrics, but they did not scroll in real-time to the music, which is a feature that’s been available on iOS since iOS 13 was released. As noted by 9to5Mac, the time-synced lyric feature addition is mentioned in the ‌macOS Catalina‌ 10.15.4 release notes.

Lyrics in ‌Apple Music‌ for Mac can be accessed by playing a song and then clicking on the little speech bubble that’s located at the top right of the app.

Not all songs have lyrics or time-synced lyrics, but lyric information is available for most popular titles. Songs with time-synced lyrics will feature an interface that scrolls through the lyrics as they’re sung.

When real-time lyrics were introduced for ‌iOS 13‌ in September 2019, ‌Apple Music‌ lead Oliver Schusser said in an interview that Apple has a team of employees that listen to songs and transcribe the lyrics to ensure their accuracy for use in the time-synced lyrics feature rather than sourcing lyrics from a third-party provider.