Home News Here are all the science projects that SpaceX will be delivering to...
News 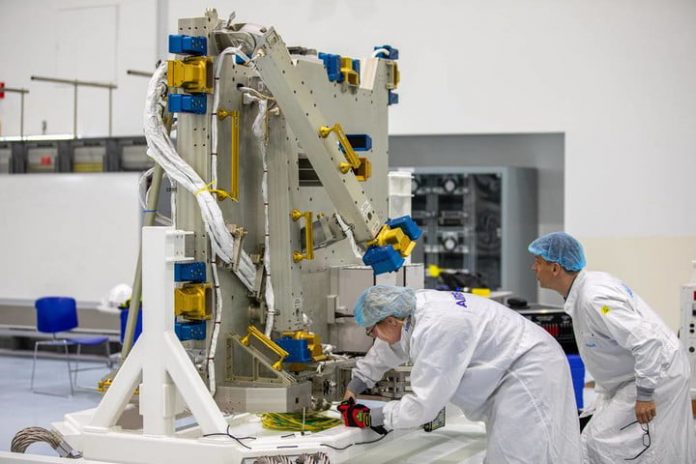 In a couple of weeks, SpaceX will be launching a Dragon cargo spacecraft bound for the International Space Station (ISS), carrying not only supplies for the astronauts but also a range of scientific equipment and research technology. The cargo includes tools for researching everything from growing human heart cells to making more comfortable sneakers.

One of the largest additions to the ISS will be the Bartolomeo facility, a European Space Agency project to provide more room for scientific experiments by attaching to the outside of the space station. Potential uses for the extended space include “Earth observation, robotics, material science, and astrophysics,” according to NASA.

Airbus workers unpack the Bartolomeo platform at NASA’s Kennedy Space Center in Florida in preparation for its launch to the International Space Station. The platform, manufactured by Airbus Defence and Space, hosts multiple external payloads in low-Earth orbit. NASA

Other projects include one by Adidas to test out its molding process in which thousands of pellets are blown together until they fuse, creating a midsole for shoes to make them more cushioned for high-performance athletes. There’s also a study into how water droplets form in low gravity which could help reduce the amount of water used by showers here on Earth, assisting the important project of water conservation. And there’s a project to test improvements in 3D printing which could be used to print spare parts and repair tools for future space voyages.

Finally, there are also two biomedical experiments being taken to the ISS. One will look at how microgravity affects biotechnology like the “Organ Chip” which simulates the responses of human tissue on a small chip. And the other will investigate whether it is possible to grow human heart cells from stem cells in microgravity. The researchers believe the development of these heart cells could eventually be used to treat cardiac problems here on Earth, especially among children as their cardiac issues are particularly hard to treat.

The mission is scheduled to launch at 10:45 p.m. PT on Sunday, March 1, from Space Launch Complex 40 at Cape Canaveral Air Force Station in Florida. This will be the 20th mission as part of NASA’s Commercial Resupply Services contract, in which private companies like SpaceX and Boeing take over some duties for delivering supplies to the ISS.

In the future, SpaceX will be taking a larger part in ISS operations as well. It will be delivering astronauts to and from the space station as part of NASA’s Commercial Crew program, using its Crew Dragon capsule. The first manned Crew Dragon mission is targeted for May 7.