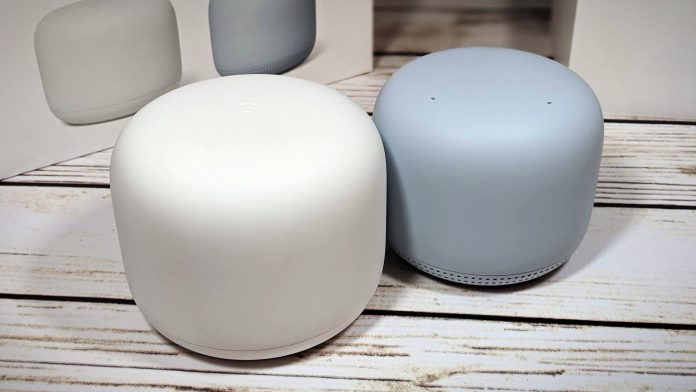 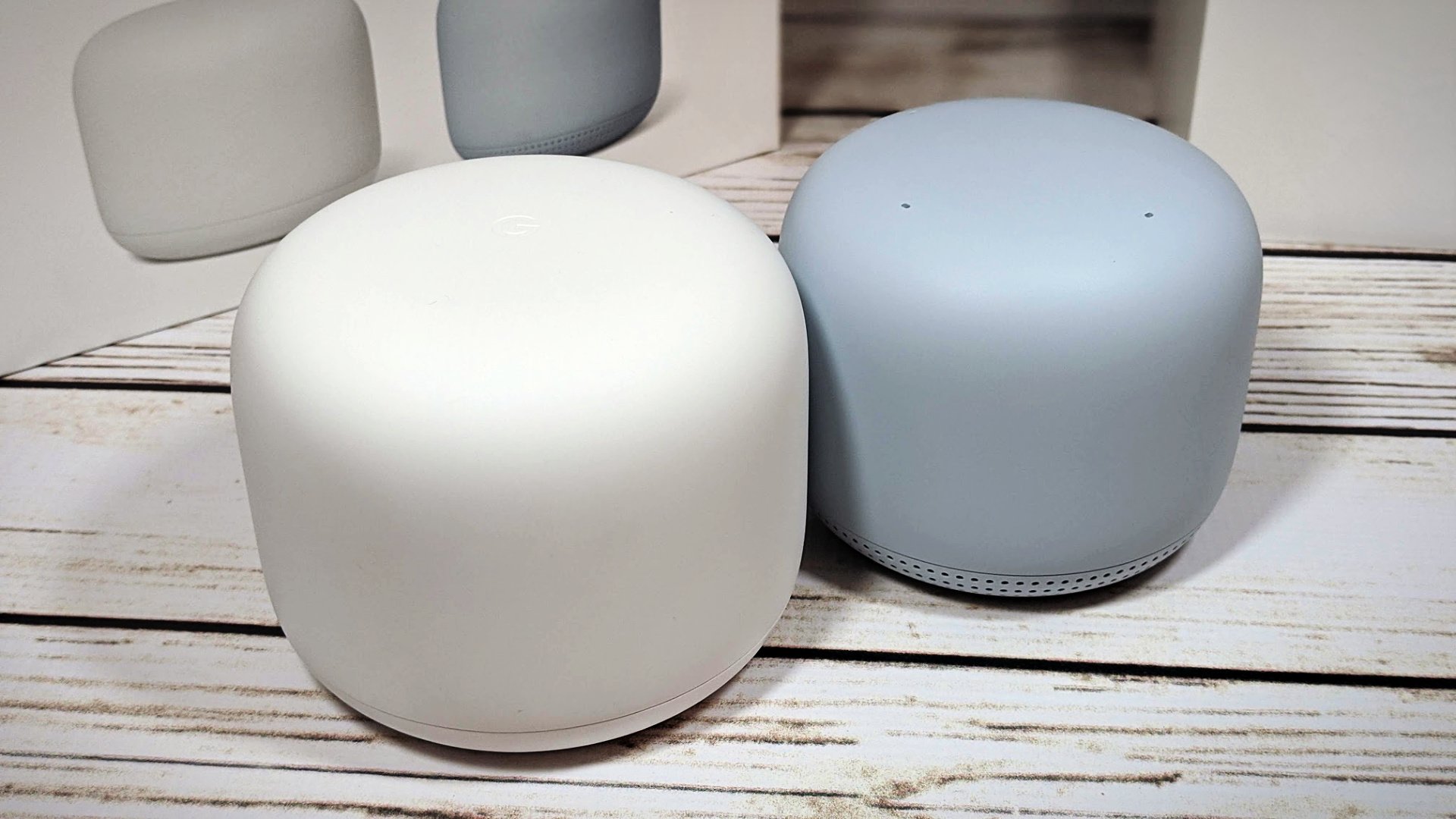 We’re a few years into mesh networking systems and things continue to get better. Not only that, but they’re getting less expensive, too. It’s quite easy to set up a home network that covers all rooms in all floors, regardless of the size of the house. And we don’t have to spend a ton of money in the process.

The Google Nest Wifi is Google’s second foray in this space, as it follows the 2016 Google Wifi. The 2019 experience gains a few upgrades with more powerful hardware, and also features a more modern design.

Google offers a number of Nest Wifi options, including a two-piece (router and access point) and three-piece (router and two points). Additionally, it sells the router and Wifi points separately. As to which one you’ll want or need largely revolves around the size of your home. Indeed, the router alone is reported to provide coverage up to 2,200 square feet.

Google provided us with the two-piece (router and point) system which covers up to 3,800 square feet. Here is our review of the Google Nest Wifi after spending a few weeks with the bundle.

For a company who didn’t produce hardware until a few years ago Google really does have a particular design language. The router and point fit right in and look right at home in any environment. They’re unobtrusive, simple, and easy on the eyes. 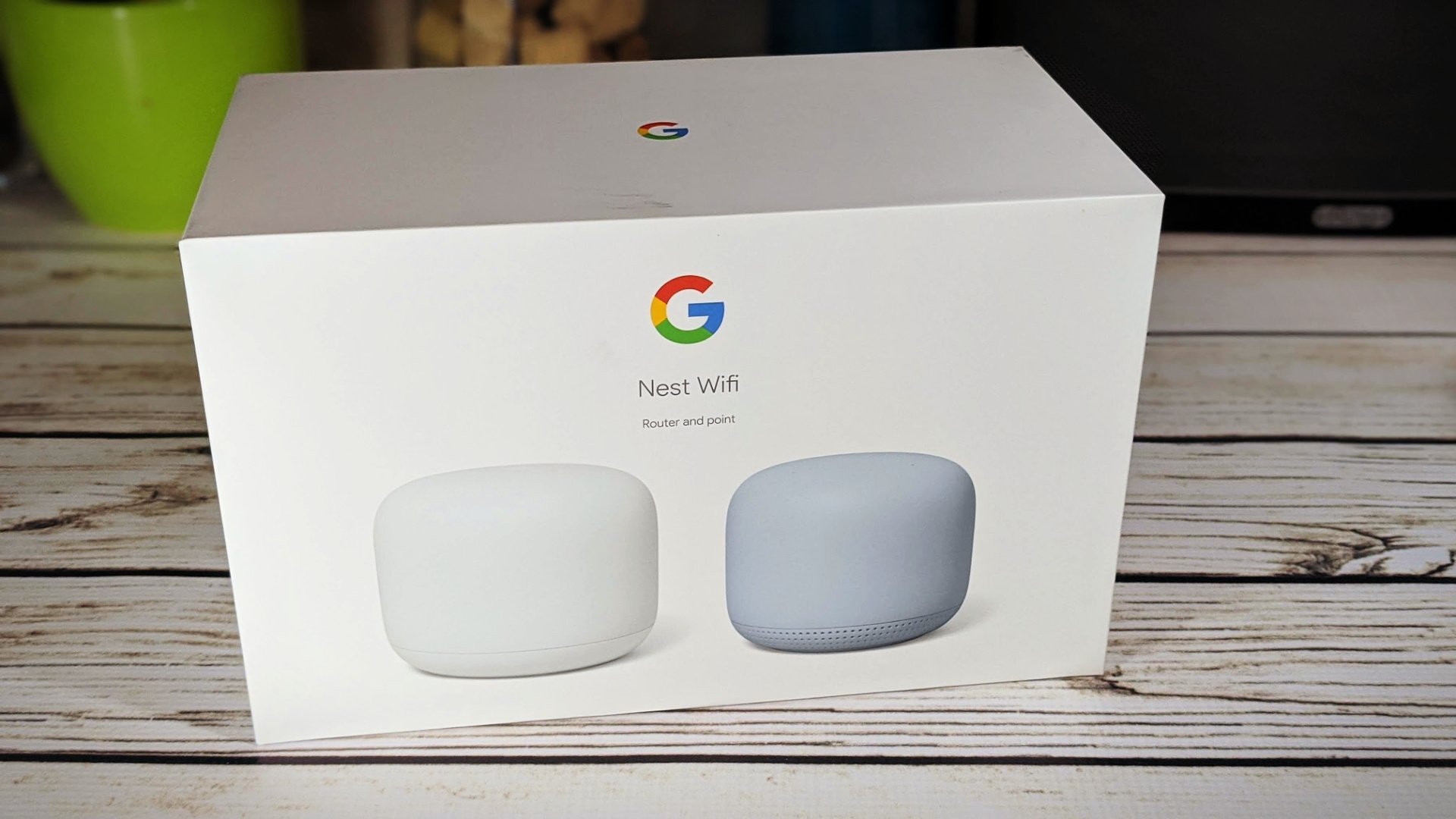 Gone is the puck-like shape as this generation features a taller, marshmallow-esque design. The router is 4.3-inches tall and houses a WAN port, gigabit LAN port, and power jack in its base.

The point, available in Sand (tan), Mist (soft blue), and Snow (white) colors, is just a smidge shorter and contains a Bluetooth radio and Google Assistant-powered smart speaker. In essence, you get an extra Nest Mini with each point.

Inside the point are four far-field microphones and a 40mm speaker driver which offers 360-degree audio. There’s also a power jack, an LED ring that surrounds the base, and a privacy switch to disable Google Assistant. The light ring glows white when you ask questions of the speaker. 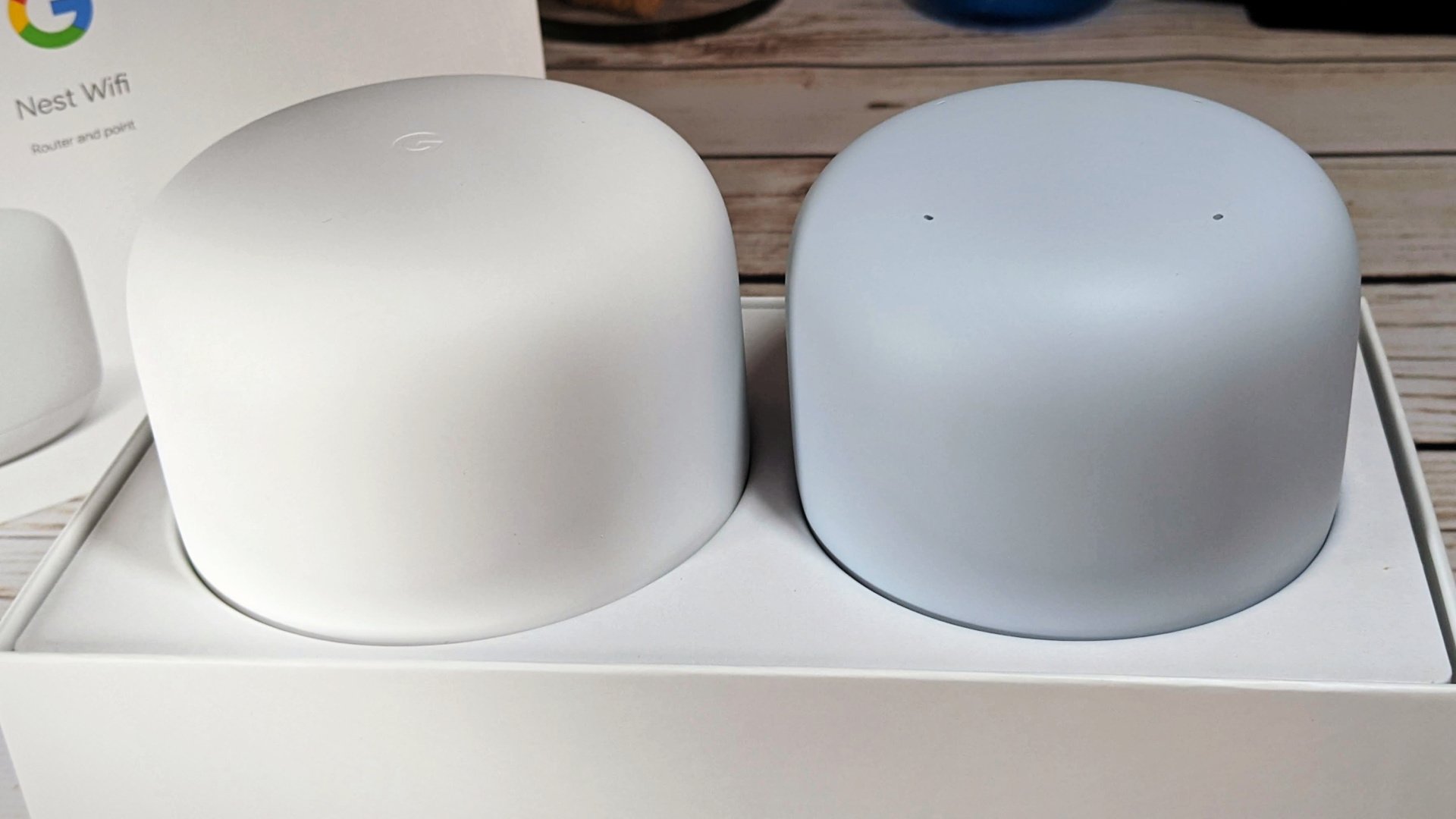 The Nest Wifi is not a modem, so you’ll be plugging into an existing modem. Your internet provider likely offers at least a basic model that may or may not provide for wireless connectivity.

Should this be your first attempt at setting up a Google Home, you’ll need to log in via your Google account or create one first. You’ll want to download the Google Wifi app for more control over the network, including seeing which unit a device might be connected to or configure port forwarding.

The Google Wifi app also helps determine the best location(s) for your points, set up and test its speaker(s), and test speeds between the router and the point. It can also test the overall speed of your home connection.

If for no other reason, parents ought to love where we are with today’s WiFi network capabilities. We appreciate controls over specific devices, blocking access to adult websites, and/or creating schedules. And, perhaps most of all, we love being able to hit the pause button any time we want. 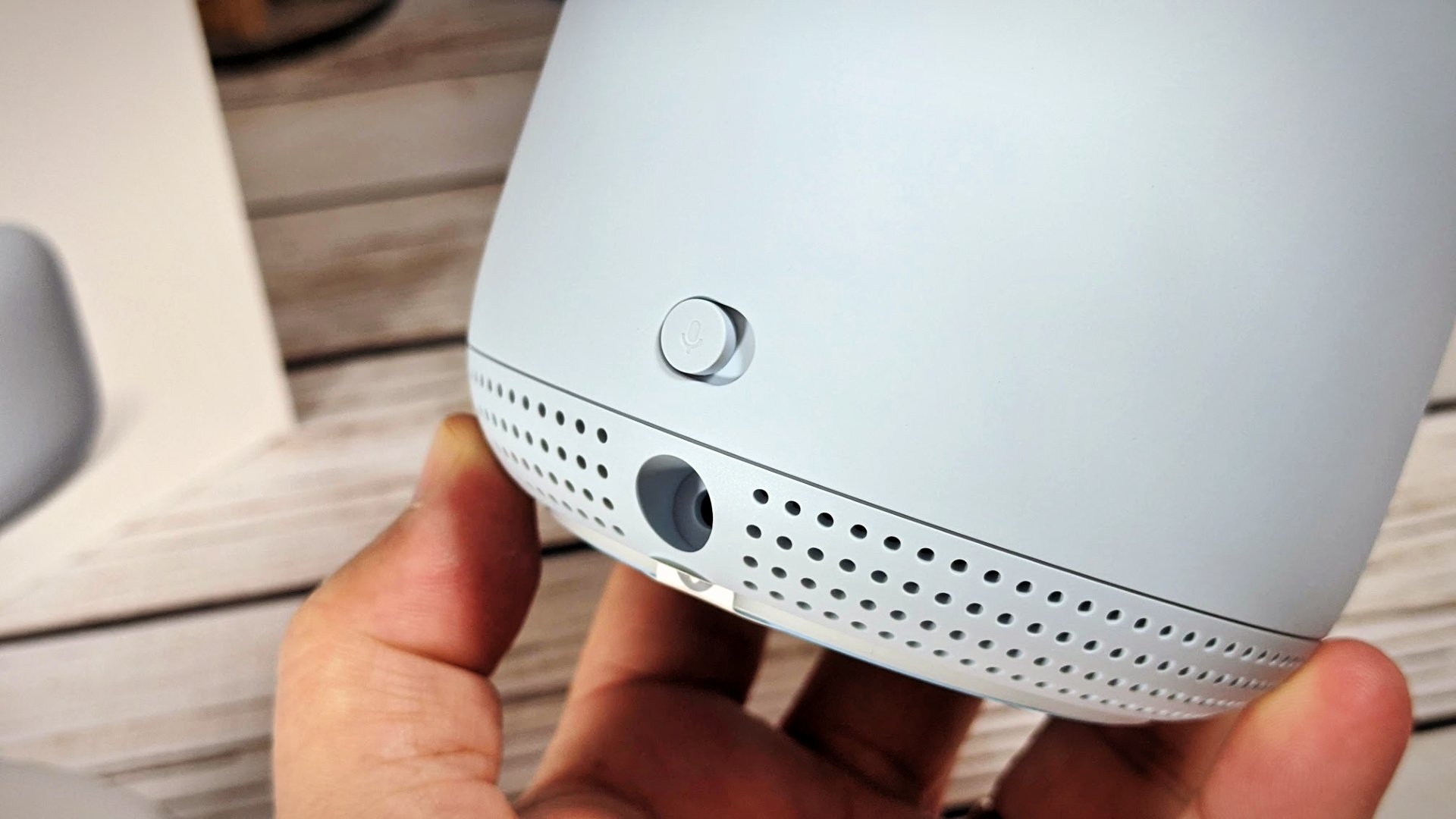 The Nest Wifi provides all of these features and in a way that’s user friendly and intuitive. None of these are exclusive, of course, but we like that we don’t need to dig deep to make adjustments.

It’s worth noting here that the router only has one Ethernet port and that points have none. This could prove troublesome for people who like to physically connect devices like a PC, game console, Shield TV, and/or Chromecast Ultra. While some love the flexibility of going wireless, there are others who’d rather connect directly.

One of the cooler features that comes with the Nest Wifi is how it can help others connect to the network. Have friends over for game night? You can have your smart displays show a QR code that automatically lets them connect with the proper credentials.

Right around the time we started reviewing the Nest Wifi we also received and started testing out Google Stadia. As some may know, the game streaming service requires a rather solid (read: fast and stable) internet connection.

Nest Wifi can be optimized for Google Stadia with its “Gaming Preferred” mode. When enabled, it prioritizes gaming over Stadia or consoles instead of PC, Chromebooks, phones, etc. Sure, this feature is readily available for most wireless networks and mesh systems, but it’s not always this easy and obvious.

One thing we’re starting to see become popular in mesh networks is the advent of WiFi 6 support. It’s the newest protocol and a standard by which many new products will adhere. We’ll see it in laptops and other devices as they roll out over 2020 and beyond. 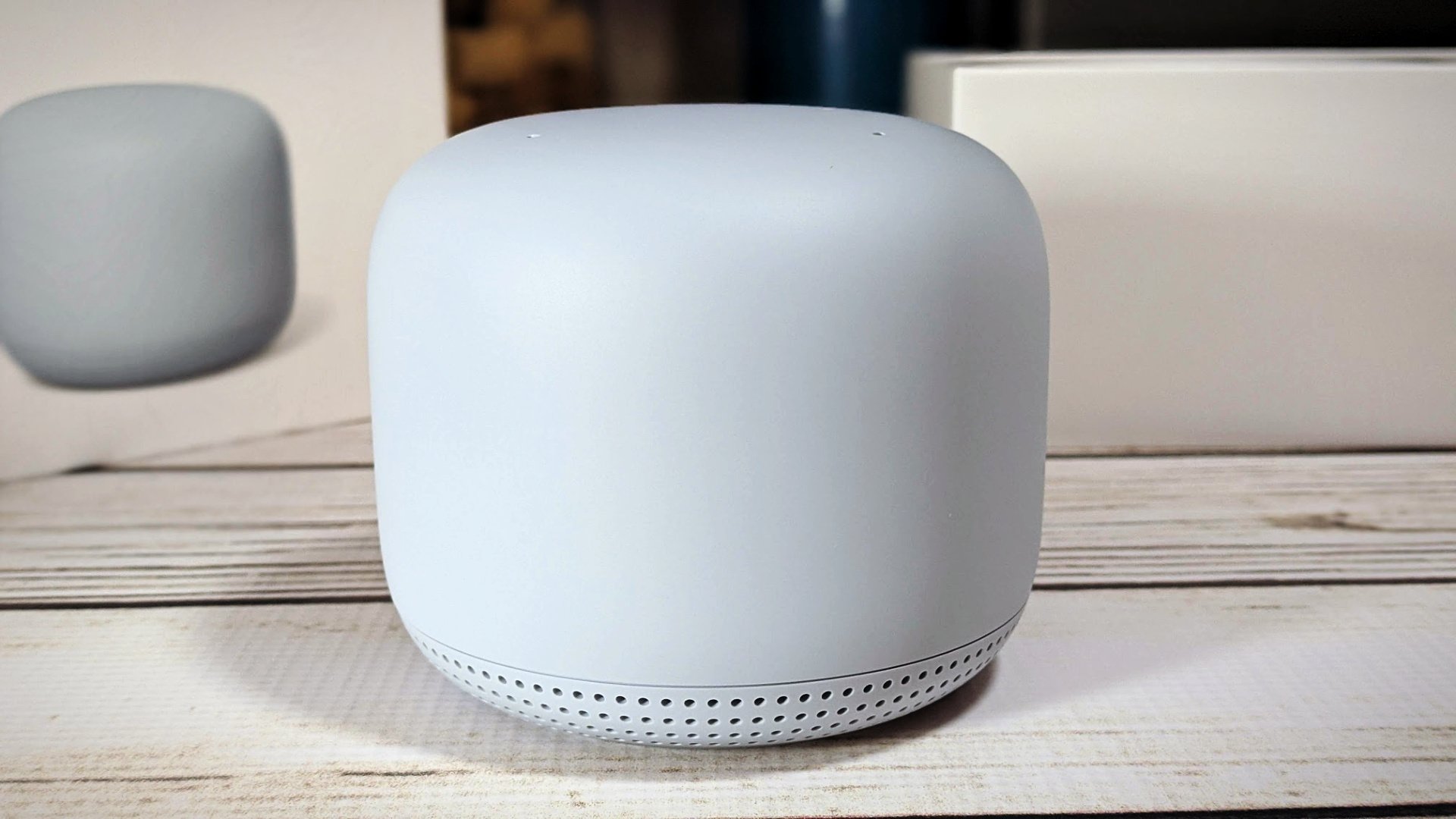 Unfortunately, there’s no support for WiFi 6 in the Nest Wifi. While this might be a deal-breaker for some, we’re reminded that very few people know what it is nor do they have a data connection that even comes closes to fully taking advantage. It’s a non-starter for all but the most serious, and demanding user.

Another feature that’s new for the Nest Wifi is that the Nest Wifi Point doubles as a smart speaker. It’s usually just $30-$50 for a Nest Mini; adding them to your home is cheap and easy.

Here, though, the sound that comes from the point is great — better than what you might get out of the low-cost Nest Mini. Hell, we like it better than the first-gen Google Home speaker.

Music is loud, clear, and punchy. In fact, you may wish to adjust the equalizer to dial bass down if you’re using it for music. The Google Assistant, and any podcasts or playlists sound excellent and particularly surprising for a device that’s first purpose is for WiFi.

Conclusion – Should you buy Nest Wifi?

Even though our homes aren’t getting physically bigger, we find that single routers and modems just don’t work any longer. And while you might be paying for a great internet package, you’ll probably run into dropped connections, buffering, and poor reception in parts of the home.

If you’ve added a handful of smart speakers, displays, lights, or anything similar in the last year or two, you’ll want to consider a mesh system. The same goes for a home with multiple family members. By the time you add in phones, tablets, computers, TVs, game consoles, and other WiFi-connected products, you could be looking at dozens of things nipping at your network. 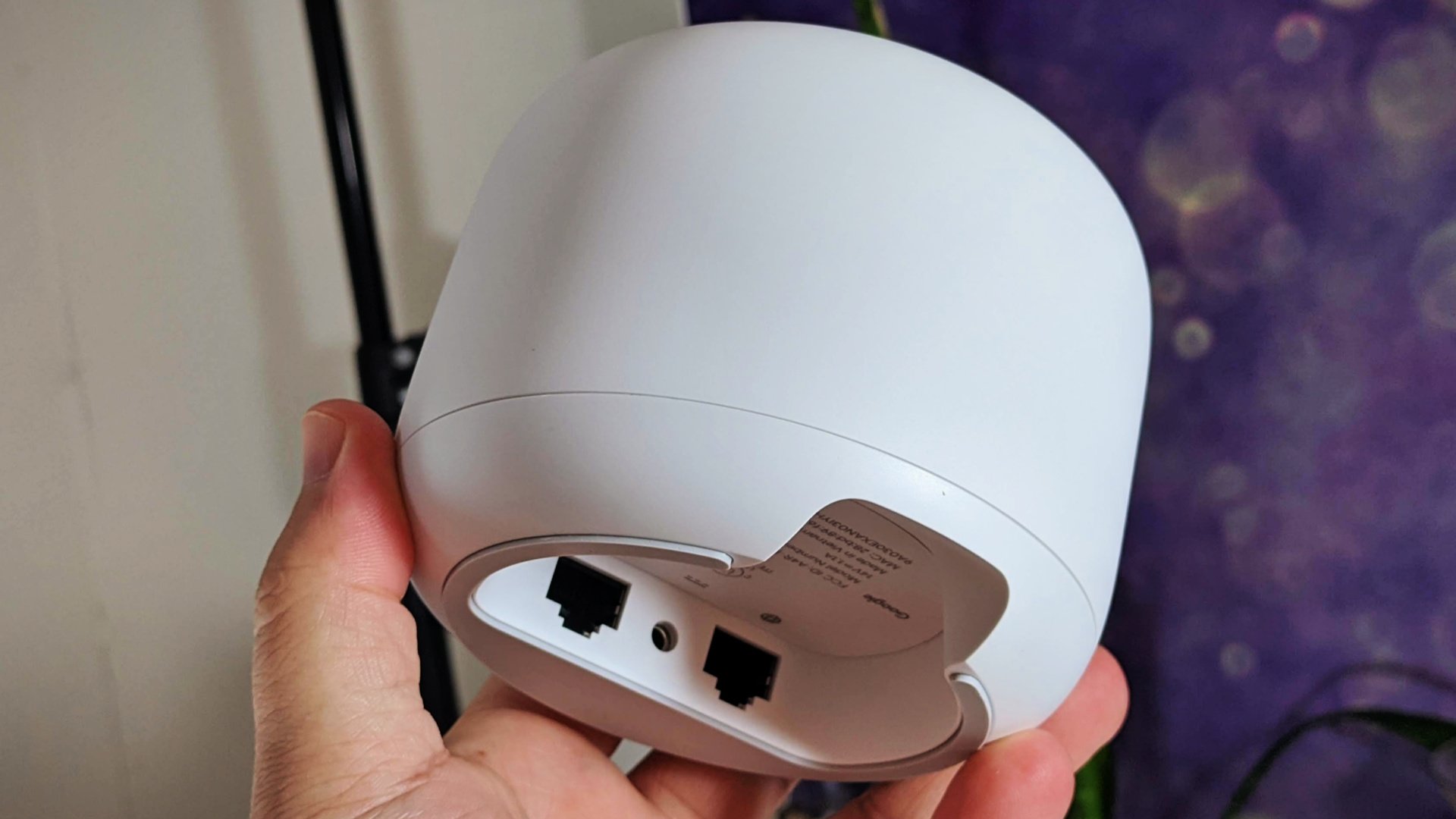 That’s a long way of saying that you should be looking into a mesh system. But, what about Google’s Nest WiFi? If the Google Assistant is your preferred virtual/digital assistant, the Nest Wifi is a no-brainer. You absolutely should be looking at this as a possible solution.

Things are super simple from the time you take it out of the box to the time your friend jumps on as a guest. You can’t ask for a much easier or more intuitive interface. Additionally, you’d be hard-pressed to find an option that has the same range and features. In fact, there are no other options on the market which add a Google Assistant-ready speaker.

We appreciate that consumers can select from different options and that it’s not just a “one size fits all” package. There’s no risk of buying too much network, and if your needs change, you can scale to meet demands.

Benefits of LED Screen Rental in Dubai for Outdoor advertising