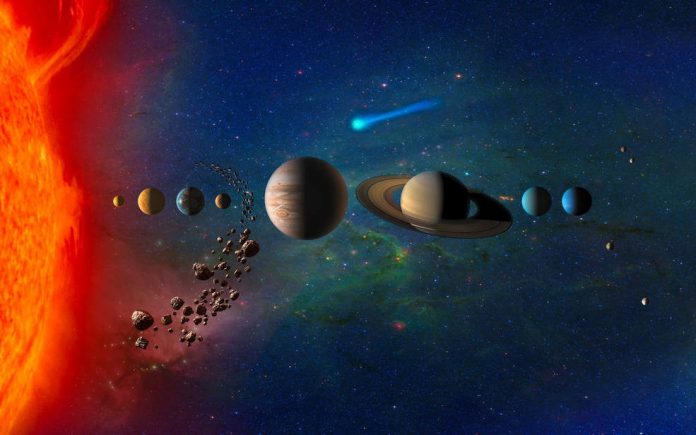 Four new missions are being considered to learn more about the strange and wondrous objects of our solar system as part of NASA’s Discovery Program. The program invites scientists and engineers to submit proposals for planetary science missions which investigate objects which are not current targets of NASA active missions. The hope is that the search will turn up new ideas for missions which can teach us about the bodies of the solar system, how they developed over time, and even how the Earth developed as well.

Exploring the volcanoes of Io

This global view of Jupiter’s moon, Io, was obtained during the tenth orbit of Jupiter by NASA’s Galileo spacecraft. NASA/JPL/University of Arizona

One selected mission is to explore Io, a moon of Jupiter, which experiences high temperatures by Jupiter’s massive gravity. The moon has more volcanic activity than any other body in the solar system, and studying it could help astronomers understand more about how planets and other bodies form.

The Io Volcano Observer, or IVO, mission would send a craft into orbit around Jupiter to make 10 close flybys of the moon. This would allow the spacecraft to collect images and other data from the moon to determine whether there is an ocean of magma lurking beneath its surface.

“Magma oceans were common among the terrestrial planets — Mercury, Venus, Earth, Mars, and the moon — soon after the planets formed,” IVO principal investigator Alfred McEwen said in a statement, “and are an integral piece of planet formation and evolution. They are responsible for the formation of metal cores and degassing to produce the planet’s oceans and atmosphere.”

To perform its research, IVO would carry instruments for monitoring volcanic activity, measuring heat flow and lava composition, and mapping magnetic and gravitational fields. Using these instruments, the scientists could discover whether the gravitational forces exerted by Jupiter on Io produce sufficient heat to sustain a magma ocean.

Searching for a subsurface ocean on Triton

Global color mosaic of Triton, taken in 1989 by Voyager 2 during its flyby of the Neptune system. NASA/JPL/USGS

Another mission up for consideration is Trident, a flyby of Triton, the icy moon of Neptune. Being so far from the sun, Triton is icy cold with a surface temperature of -391 degrees Fahrenheit (-235 degrees Celsius), but it’s still a figurative hotbed of activity. It has plumes erupting from its surface and may have an atmosphere, and it could even have an interior ocean hidden beneath its outer shell. With these factors, the moon potentially has conditions which could support life.

Triton has already been the target of one flyby, by the Voyager 2 spacecraft in the 1980s, but a team has been campaigning for another craft to go back there. If the Trident project is chosen, it could map out the moon and characterize the processes occurring on its surface and below.

“[Triton is] probably active today,” Louise Prockter of the Lunar and Planetary Institute, principle investigator of Trident, said last year. “Having an active body so far out in the solar system would be incredible … It’s such a strange and alien world. We want to go and figure it out.”

Discerning the history of Venus

A composite image of the planet Venus as seen by the Japanese probe Akatsuki. Image from the Akatsuki Orbiter, built by Institute of Space and Astronautical Science/Japan Aerospace Exploration Agency

Our planetary neighbor Venus is something of a mystery, with thick, acidic clouds in its atmosphere which reflect light away and shroud the surface. Rich in carbon dioxide, the atmosphere contributes to a greenhouse effect meaning that Venus has an even hotter surface temperature than Mercury, despite being farther from the sun.

Learning more about the details of this atmosphere will help scientists understand how it formed and evolved over time. It could also answer the debate over whether Venus was ever temperate and ever had an ocean on its surface or not.

To make it through the thick clouds of sulfuric acid on the planet, the proposed DAVINCI+ craft (Deep Atmosphere Venus Investigation of Noble gases, Chemistry, and Imaging Plus) will have instruments including cameras protected in a “purpose-built descent sphere” as well as an orbiter for mapping surface rocks.

Venus’s atmosphere is this lurking laboratory for telling us about its history,” principle investigator James Garvin of NASA’s Goddard Space Flight Center said last year. “And really, most of the measurements in the atmosphere are woefully incomplete.” When it comes to what’s really going on on the planet, “We need to find out,” Garvin said. “Because she’s waiting to tell us something and I would hate to miss the boat.”

Understanding why Earth and Venus are so different

One particular question about the planet is why it is so different from Earth. It may once have hosted liquid water on its surface, but over time it became hotter and hotter, and developed features like volcanoes and giant mountains.

“Venus is like the control case for Earth,” Sue Smrekar of NASA’s Jet Propulsion Lab, principal investigator of the VERITAS mission, explained in a statement last year. “We believe they started out with the same composition, the same water and carbon dioxide. And they’ve gone down two completely different paths. So why? What are the key forces responsible for the differences?”

Smrekar and her team propose sending a craft into orbit armed with a synthetic aperture radar which can determine surface elevation across the planet. With this information, they could construct a 3D map of the entire surface, and learn about whether the planet is still active in terms of tectonics and volcanism. It could also use infrared analysis to map emissions that could tell the scientists more about Venus’s mysterious geology.

What’s next for these missions

These plans aren’t approved missions yet — they’re concept studies which may or may not end up being fully funded. But NASA has shown interest in all four, providing $3 million of funding for each project for a nine-month study to develop the concept. After this period is over and the concepts have been submitted, NASA will select up to two missions for continued development. The final selection will take place in 2021.