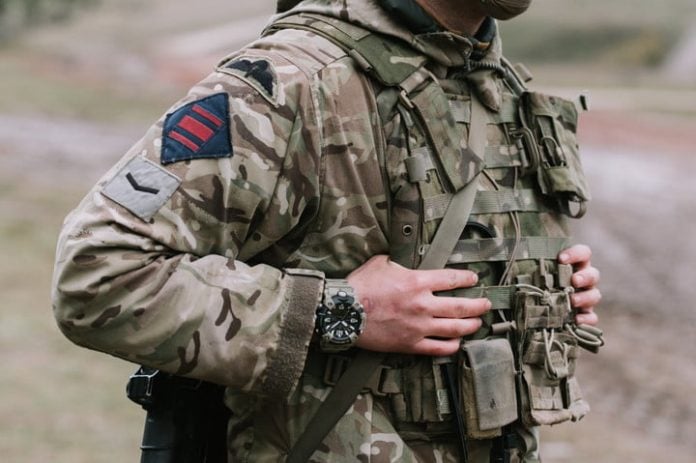 Casio has become an official partner to the United Kingdom’s Ministry of Defence (MoD), and the first G-Shock watch to come out of the collaboration is the British Army x G-Shock Mudmaster. Already a very tough watch, the limited-edition model has been tweaked slightly to fit in with the MoD’s remit, and the needs of the soldiers who may wear it.

The Mudmaster GG-B100BA’s Carbon Core Guard outer structure, introduced last year on the redesigned Mudmaster and other high-end G-Shocks, is surrounded by a resin case with a new camouflage design, apparently based on the British Army’s multi-terrain pattern, also known as MTP, which has been used on uniforms and equipment since 2010. This is paired with a stealth black dial, a design feature the British Army wanted on the watch, ensuring it remains incognito on the wrist.

It comes inside a custom box decorated with the MTP pattern, which hides a presentation case emblazoned with the British Army’s crest on the inside of the lid. The G-Shock Mudmaster is more compact, and therefore more wearable than old Mudmaster models. That said, it still weighs 92 grams and has a 53mm case, and the overall design is very masculine, so don’t expect it to disappear on tiny wrists.

The reduction in size and weight over old Mudmasters comes from the Carbon Core Guard structure, which uses carbon fiber and resin for ultimate strength, and enabled Casio to remove the old button guards and slim down the body, while keeping the same level of toughness. This means it’s shock, mud, water, dust, and temperature resistant, and incredibly hard wearing. G-Shock watches aren’t just for show, they will survive in the harshest of environments too.

Like other new Mudmaster models, the British Army x G-Shock Mudmaster collaboration uses Bluetooth to connect to your phone. Through the G-Shock app it has activity and location tracking, which then is used for a Mission Log feature, which tracks your progress between points on a hike. The watch also has a compass, thermometer, barometer, and an altimeter. There is no need to charge the Mudmaster, as it will run for about two years on its own replaceable battery.

When can you get one? It will be available in March for 450 British pounds, which is around $585. Expect to see it on G-Shock’s official online store, and in its retail stores too. However, it’s a limited-edition G-Shock, and these can sell out fast. It’s also the first in a series of Ministry of Defence G-Shocks, so an RAF and a Navy watch seem likely in the future.