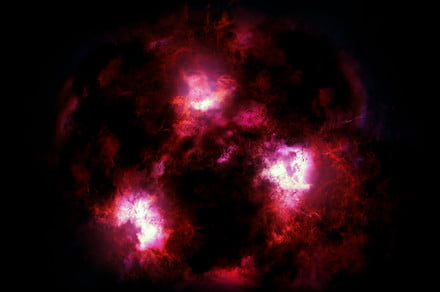 Scientists have discovered the biggest explosion seen in the universe since the Big Bang. The explosion, which released five times more energy than the previous record holder, emanated from a supermassive black hole at the center of a galaxy hundreds of millions of light-years from Earth. It was powerful enough to punch a cavity in the super-hot gas surrounding the black hole large enough to fit 15 Milky Way galaxies lined up next to each other.

“We’ve seen outbursts in the centers of galaxies before but this one is really, really massive,” Professor Melanie Johnston-Hollitt, from the Curtin University node of the International Center for Radio Astronomy Research, said in a statement. “We don’t know why it’s so big. But it happened very slowly — like an explosion in slow motion that took place over hundreds of millions of years.”

Signs of the explosion had previously been spotted in the form of the cluster plasma cavity, which was seen using X-ray telescopes. However, the possibility that this was caused by an explosion was dismissed because of its enormous size.

“The Ophiuchus galaxy cluster exhibits a curious concave gas density discontinuity at the edge of its cool core,” the researchers write in an abstract describing their work. “It was discovered in the Chandra X-ray image by Werner and collaborators, who considered a possibility of it being a boundary of an AGN-inflated bubble located outside the core, but discounted this possibility because it required much too powerful an AGN outburst.”

It was only when the researchers looked at the Ophiuchus galaxy cluster using radio telescopes that they realized what it was that they had discovered. They believe that this “dinosaur” discovery may be an early example of the new class of discoveries that can be made using low-frequency surveys of galaxy clusters. It’s a reminder of why it’s so important to study the universe at a variety of different wavelengths.

A paper describing the work, titled “Discovery of a giant radio fossil in the Ophiuchus Galaxy Cluster,” was recently published in The Astrophysical Journal.

"We are taking this very seriously. We are certainly looking at it."What you need to knowThe U.S. government is considering
Read more
News