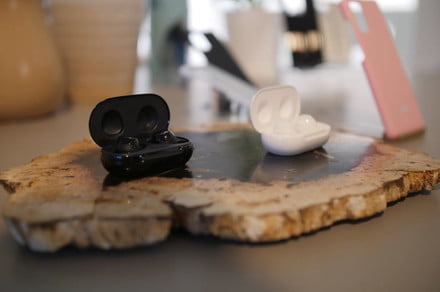 Samsung dropped some big product bombs at its Galaxy Unpacked event this year. The Galaxy Z Flip turns smartphone design on its head and the Galaxy S20 Ultra’s camera borders on insane, but somehow it was the Galaxy Buds+ announcement that most caught me off guard. I knew they were coming, but I had no idea Samsung had managed to increase battery life to 11 hours per charge, nor that they would play for an hour off of just three minutes of charging. Talk about a game-changer!

Is it though? The Master & Dynamic M07 Plus, as an example, offer 10 hours of playtime if you’re willing to pay $300. Or there’s the Power Beats pro at 9 hours for $200. That 11 hours doesn’t seem like such a grand technical feat when compared to those models, but I’d submit that most folks will be looking at the Galaxy Buds+ and AirPods Pro because they are accessible, light, relatively compact, and because they’ll be sitting right there when you buy your phone.

And since Samsung will sell these buds right next to its new Galaxy smartphones in the same way Apple will be selling its AirPods Pro as the must-have accessory to its latest iPhones, I figured it made sense to pit them against each other, even though, on paper, it doesn’t seem like a fair fight. Let’s go category by category to compare these two popular models in key areas, then I’ll go ahead and make my final call on which is best.

This one’s easy. The new Galaxy Buds+ trounce the AirPods Pro. At a claimed 11 hours of playtime per full charge (we’re currently testing that claim), and an additional 11 hours from the case, plus the ability to wirelessly charge the buds using a Galaxy phone, I’d have to say the Galaxy Buds+ are a more convenient option for marathon users and folks who don’t like charging their stuff every day. That kind of battery life at $150 is damn impressive.

Another clear call, this time for the AirPods Pro, which have some of the best active noise-canceling technology I’ve heard in a wireless in-ear headphone yet (yes, even better than the Sony WF-1000xM3, surprisingly).

The Galaxy Buds+ don’t have any noise-abatement tech outside of the fact that a good seal with a silicone ear tip can block quite a bit of noise. That passive noise isolation, paired with music at a reasonable volume, blocks most of the outside world. So, for all but frequent flyers or loud train commuters, active noise-canceling may not be necessary to ensure a private listening experience.

The AirPods Pro have this section in the bag as well. I still can’t believe I’m heaping so much praise on an Apple audio product, but Apple has the AirPods Pro sounding good enough to stand up to most of the high-end competition, while handily dismissing most lower-cost options. Bass is solid but not overbearing, midrange comes through without too much coloration, transients are clean without being too forward, and the treble shimmers enough while avoiding sterility.

The Galaxy Buds+ have a very poignant treble response which calls attention to itself. It’s not the kind of sound I’m used to from AKG — a high-end professional audio brand which Samsung nabbed as part of its Harman acquisition in late 2016 — which I’ve always felt always voiced its products with detailed, but generally smooth high-frequency reproduction. The midrange response on the Buds+ is fine, with no mid-bass bloat to create a chesty, droning sound to male vocals add a booming sound to kick drums. The flip side of that is a generally “thin” sound that had me mentally reaching more deeply to hear what I am used to hearing served right in front of me.

I am also disappointed in the Galaxy Buds+ bass response, which I feel could run deeper and have a little bit more presence.

To be clear, I did try out the bass boost EQ preset in the Samsung Wearable app, which lets you control various aspects of the Buds+, but I didn’t find it made a significant improvement.

Just as beauty is in the eye of the beholder, comfort is in the ear of the listener. Everyone’s ears are different and your mileage may vary. Still, I found the Galaxy Buds+, which are lighter and more ergonomically shaped for my ears, to be more comfortable than the AirPods Pro. On long flights, I’ve had to pull the AirPods Pro out to give some pressure points a rest. Three hours into testing the Galaxy Buds+, I felt no need to remove them.

Bonus points to the Buds+ for offering a more secure fit, thanks to mini-wings (or “fins,” if you prefer) offering added stability.

The Samsung Galaxy Buds+ are to Galaxy phones as the AirPods Pro are to iPhones. Native functions for each provide users with easy connections and at-a-glance battery status, both for the earbuds and the charging case.

I will give the Buds+ a slight advantage for being a little more cross-platform friendly thanks to the Galaxy Buds+ app developed for iOS, which grants the same access to EQ presets, ambient mode control, and touch-control customization.

It’s a tight race, but I’ll go ahead and give this one to the Buds+

I wouldn’t recommend either one of these wireless wonders for fitness considerations — look to the Jabra Elite Active 65t for that sort of thing, fitness buffs — but I do prefer the ability of the Buds+ to stay in. Meanwhile, the Apple AirPods Pro are IPX 4 certified whereas the Buds+ are only IPX2.

Meh, this one’s a draw

AirPods Pro win here. Call clarity and overall fidelity — thanks in large part to better background noise reduction — were all better for the person on the receiving end of our test calls. By comparison, the Samsung Galaxy Buds+ let a lot of background noise through and added quite a bit of low-end bloat, resulting in a muddled vocal quality.

While the Galaxy Buds+ have a lot going on for them — not the least of which is a killer 11-hour battery — The Apple AirPods Pro sound better and have legit noise-canceling. In my opinion, the AirPods Pro are worth the extra $100, so I am going to call them the winner of this battle.

With that, I’ll add that I think the Galaxy Buds+ will make much more sense for many more people. Not everyone needs active noise-canceling, nor are they likely to be as picky about sound quality as I am. Still, if I was going to go out and buy a pair of wireless buds today, my money would be going to Apple.

This coming from a guy who owns a Galaxy S9.