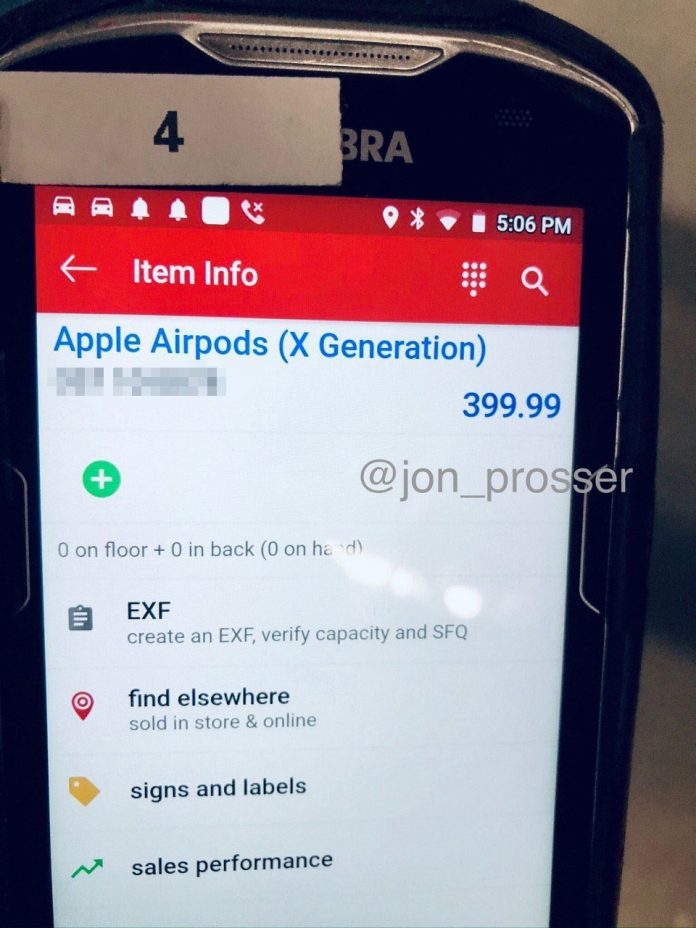 Target’s internal inventory system appears to include a listing for a product called “Apple Airpods (X Generation) priced at $399,” according to multiple Target employees who got in touch with YouTuber John Prosser.

Prosser speculates that the name could refer to Apple’s over-ear headphones that are rumored to be in development, but the listing is not accompanied by an image and includes no other information other than the name and the prospective price.

Notably, the spelling of “Airpods” is wrong, so Apple Airpods (X Generation) may just be a placeholder name for something coming in the future. The $399 price tag is $150 higher than Apple’s most expensive AirPods, the AirPods Pro, so if the product is real, it is a higher-end headphone option in the ‌AirPods‌ line. There are three SKUs with the X Generation name, suggesting three prospective colors.

Multiple Target employees have started reaching out to me about this 🤔

Showing up in their systems and on UPC scanners is this mysterious “Apple ‌AirPods‌ (X Generation)” listing, priced at $399. 👀

AppleInsider says that it spoke to multiple Target employees after learning of the listing, and while there was no information to be gleaned about the origin of the image, the employees said placeholders for new products with pricing information are common, but product names aren’t always accurate.

The employees suggested that products with a placeholder “ship within a month” or sometimes “as soon as a week” after appearing in the Target inventory system, so if there is indeed a new ‌AirPods‌ product in the works, it could be coming soon. Apple is rumored to be holding an event on March 31st where the new ‌AirPods‌ could be announced alongside the low-cost iPhone that’s in development.

There have been recent rumors about “‌AirPods Pro‌ Lite” with no specific information on what that might be, but such a product would likely be available at a lower cost than the ‌AirPods Pro‌ and is presumably not the product referenced in the Target listing. Apple has no other known AirPods-style earbuds in the works, but has been rumored to be working on high-end over-ear headphones since 2018.

Little has been heard in the way of rumors about the high-end headphones, and there was some speculation that the rumors had actually been referencing the $300 Beats Solo Pro that launched back in October, but it’s possible there’s another set of headphones on the horizon.