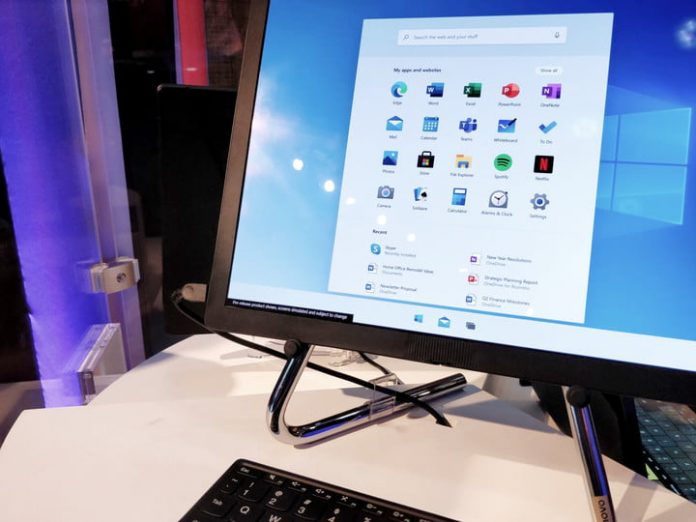 CES featured all sorts of new dual-screen laptops and foldable PCs. Despite the excitement around this new category of devices, we couldn’t help but notice something missing. Windows 10X. It’s Microsoft’s new software, made specifically work with dual-screen devices and touchscreens.

And yet, it was strangely absent from CES, leaving these devices to run a more conventional version of Windows 10. What’s the deal?

Microsoft typically plays more of a supportive role at CES. It has its own events throughout the year to focus on new software innovations or hardware announcements. But this year, the absence of Windows 10X feels detrimental.

CES is the chance for companies to show off their latest and greatest innovations, and we’ve seen a lot of that so far from many laptop makers. Dell showcased two conceptual devices, the Ori, which is a foldable PC, and the Duet, a PC with two screens. Intel meanwhile showcased “Horseshoe Bend” a 17-inch conceptual foldable OLED PC. Lenovo even had a foldable ThinkPad known as the ThinkPad X1 Fold which you can purchase later this year.

Yet, none of these devices had a working version of Windows 10X. The closest thing we saw was a ThinkPad X1 Fold with a demo running hidden in a glass case. That left them hamstrung when trying to describe the benefits of these adventurous, new devices. The Windows 10 tablet mode is notoriously trouble, and hasn’t been updated in years. Windows 10X is meant to fill the void.

It’s disappointing because Microsoft already announced its own dual-screen PCs with Windows 10X onboard last fall, the Surface Neo. CES would have been a great place to follow that up with giving us real hands-on time with the new software on some new devices.

More from Microsoft could likely coming in May at Build 2020, but its absence has left manufacturers like Lenovo and Dell in a hard position. Microsoft, more than anyone, needs these companies to convince the world that these dual-screen PCs are a good idea. But without Windows 10X, we’re left to our own imaginations about what they’re truly capable of.

The Dell Duet is a good example. It features two 13-inch screens separated by a 360-degree hinge in the middle that allows both screens to come together to create a beautiful canvas. You could use the start menu on top, or stack apps on the second screen on the bottom — but that’s the problem.

When we tried it, a lot of software was missing or wasn’t optimized for the regular version of Windows 10. Dell made such a beautiful conceptual device, yet the demo experience was downright buggy. Asides from apps like OneNote and Microsoft Edge, we weren’t able to use the second screen to its full potential. Windows 10 just wasn’t made with this type of device in mind.

There’s a simple explanation for the absence of Windows 10X. Microsoft still has a bit of a ways to go. The company hasn’t yet released public test builds or said much about the operating system. We do know that it is a massive overhaul with a new Start Menu and User Interface for dual-screen devices, so it’s likely not a small task to push it out. But’s there another problem. The company currently has no current public way of testing Windows 10X.

With the buggy release like the Windows 10 October 2018 Update in mind, this is especially important. Microsoft likely doesn’t want to push out a buggy operating system and embarrass its partners. They’d rather spend the time on it, share information with developers, and showcase it at their own Build developer’s conference. That could be the reason why we didn’t see the operating system on stage at CES.

But there is a glimmer of hope, though. Microsoft recently announced some changes to the Windows Insider program that could get Windows 10X out a bit faster. Now, the “Fast Ring” of the Windows Insider Program (where the public can test preview versions of Windows before the general release) has shifted to more of an active development branch. It is no longer tied to either of the twice-a-year Windows 10 releases. This means that Microsoft could actually start testing Windows 10X features on desktop and laptops.

Windows 10X will come, and these dual-screen PCs that need the software will eventually get it. But in these early days of this new form factor, convincing people new to the idea is crucial. Without Windows 10X, they’re missing half of the equation.