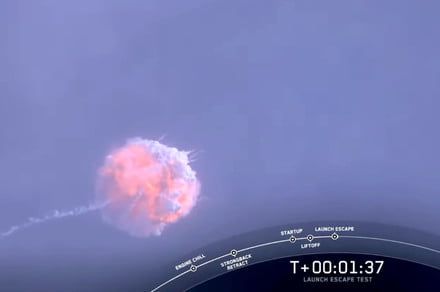 SpaceX performed a successful demonstration of its Crew Dragon emergency escape system on Sunday, a significant achievement that takes it a big step closer to its first crewed mission.

Following a delay on Saturday due to poor weather conditions in the capsule recovery area in the Atlantic Ocean, a Falcon 9 rocket launched from Pad 39A at NASA’s Kennedy Space Center in Florida at 10.30 a.m E.T.

After about 87 seconds, the Crew Dragon, which for this test carried no astronauts, deployed its eight SuperDraco engines that fired it to a safe distance away from the rocket — just as it is designed to do if there’s a serious anomaly during the rocket’s ascent on a future crewed mission.

Crew Dragon separating from Falcon 9 during today’s test, which verified the spacecraft’s ability to carry astronauts to safety in the unlikely event of an emergency on ascent pic.twitter.com/rxUDPFD0v5

Nine seconds later, the Falcon 9 booster exploded in a massive fireball (below), an event that had been expected by the SpaceX team.

Once the drogue parachutes had slowed the vehicle to a suitable speed, the four Mark 3 parachutes, each 116 feet in diameter, opened up at an altitude of about 2 km (about 6,500 feet) above the Atlantic Ocean. Finally, the Crew Dragon splashed down in the Atlantic Ocean about 10 minutes after launch, where it was met by a recovery crew.

With the successful completion of the test, SpaceX appears to have all of its ducks in a row as it looks toward using its reusable space system to transport astronauts to and from the International Space Station (ISS), with the first mission possibly taking place as early as April 2020.

In 2015, SpaceX completed a pad abort demonstration of Crew Dragon, a system that ensures the safety of the astronauts should something go badly wrong just prior to launch. Then last year, it completed an end-to-end test flight of Crew Dragon — without astronauts onboard — making Dragon the first American spacecraft to autonomously dock with the ISS and safely return to Earth. The commercial space company has also completed 10 multi-parachute tests of the upgraded Mark 3 system for the Crew Dragon, as well as hundreds of tests of its SuperDraco engines.

Now NASA needs to take a close look at all of the data from Sunday’s abort test to decide if it’s ready to certify the system for crewed missions.

Using the Crew Dragon for crewed missions would end U.S. reliance on Russia’s Soyuz program, enabling NASA to send astronauts into space from American soil for the first time since the Space Shuttle program ended in 2011.