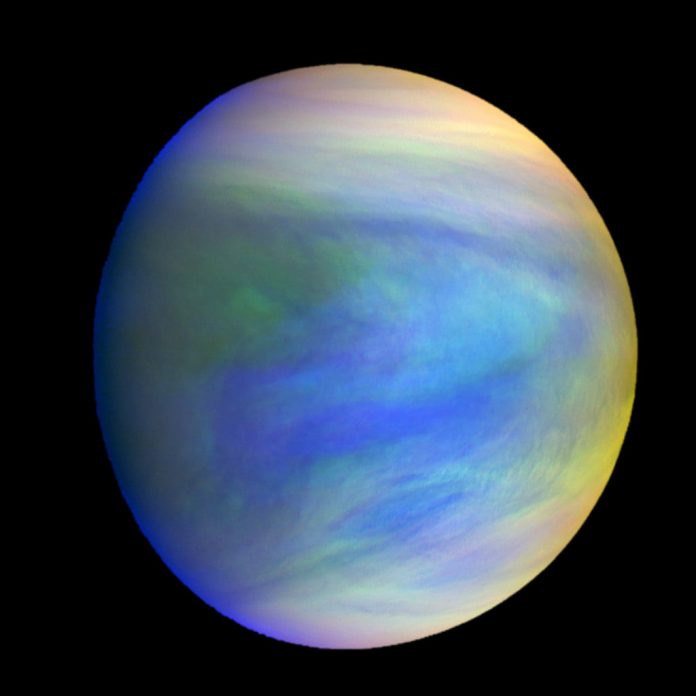 A composite image of the planet Venus as seen by the Japanese probe Akatsuki. Image from the Akatsuki Orbiter, built by Institute of Space and Astronautical Science/Japan Aerospace Exploration Agency

In the 1990s, data from the Magellan spacecraft revealed that Venus is a hellish world covered in volcanoes and lava flows. But before now, we didn’t know whether this volcanic activity was ancient or recent. Now, new research using data from the Venus Express orbiter has revealed that the lava flows are recent and could be just a few years old, which suggests that the volcanoes are currently active.

The results come from the study of a particular Venusian mineral, olivine, which reacts in the atmosphere and quickly becomes coated with iron oxide minerals. The scientists calculated that this change would be observable to the Venus Express within a few years, which dates the lava flows to recent times.

“If Venus is indeed active today, it would make a great place to visit to better understand the interiors of planets,” Dr. Justin Filiberto, the study’s lead author and a Universities Space Research Association (USRA) staff scientist at the Lunar and Planetary Institute (LPI), said in a statement. “For example, we could study how planets cool and why the Earth and Venus have active volcanism, but Mars does not. Future missions should be able to see these flows and changes in the surface and provide concrete evidence of its activity.”

Other planets in our solar system have volcanoes, but not active lava volcanoes on their surfaces like Earth does. On Mars, scientists believe that there could be liquid water located beneath the planet’s polar ice cap — and some have argued that this means there must be an underground source of heat, such as underground volcanoes.

Other bodies such as dwarf planets show volcanic activity too. On Pluto, ice volcanoes, also known as cryovolcanoes, could have erupted and sprayed liquid water over the surface of the planet which quickly froze in the chilling temperatures. Spacecraft have also observed white spots on the dwarf planet Ceres which are thought to be evidence of ancient ice volcanoes. And Io, one of the moons of Jupiter, is a hotbed of volcanic activity with more than 150 observed active volcanoes.

The research on Venusian volcanic activity is published in the journal Science Advances.

Facebook
Twitter
Pinterest
WhatsApp
Previous articleSpaceX’s Starship could be ready for launch in just a few months
Next articleBoy receives AirPods for Christmas, then accidentally swallows one