Using the new Microsoft Edge browser on a Mac feels wrong, and I love it 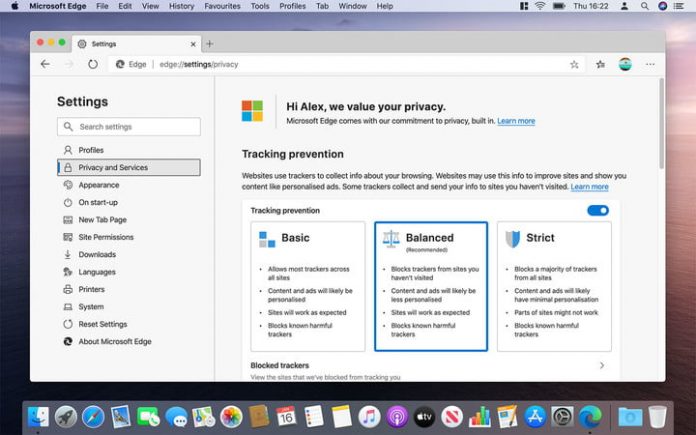 Apple and Microsoft aren’t exactly the best of pals, which is why it always feels a bit strange using an app made by the Redmond giant on a Mac. OK, sometimes it feels like straight up heresy given the acrimonious history between the two.

But with its latest Chromium-based version of Edge, Microsoft has given us a compelling reason to put aside our reservations. It’s clear from the moment you first open Edge that Microsoft wants to reassure Mac users that its new browser is a break from the past.

I decided to take it for a spin to see if it meets the high standards expected of a Mac app — especially one as fundamental as a web browser. From the moment I installed it, I was won over by how good of a Mac browser this was.

The first thing you see is a large banner announcing “Welcome to the new Microsoft Edge,” followed by the revealing phrase: “It’s time to expect more.”

Microsoft then extols the virtues of Edge, but starts with privacy. It’s a matter close to the hearts of many a Mac user. Each privacy and security feature has its own section with the opportunity for users to learn more. Microsoft has even authored a privacy whitepaper, which you can read if you like. It’s clear Microsoft is trying very hard to get it right when it comes to an issue that’s incredibly important to Mac users. This is a good sign. Let’s take a deeper look at some of those privacy features.

You might think that the prospect of Microsoft and Google joining forces would be a privacy and reliability nightmare to send Mac users running for the hills. Firefox developer Mozilla certainly wasn’t pleased when the news broke, claiming it would inch us closer to a monopolistic internet under Google’s stranglehold (much akin to Internet Explorer in the early 2000s), with your data standing to be the main victim. So, is this really a blow for Mac users’ dearly held privacy?

Edge scores more points with the straightforward way it presents its privacy options.

Most of Edge’s privacy settings are stored within its preferences (click Microsoft Edge > Preferences in the top-left corner). It’s clear straight away that Microsoft has taken a radically different approach to Chrome here. “Privacy and Services” is right near the top of Edge’s list of settings; in Chrome, your privacy settings are hidden behind an “Advanced” tab, making them much harder to find. We won’t comment on why that could be.

As for the settings themselves, Edge scores more points with the straightforward way it presents them. Click “Privacy and Services” in the left-hand column and you’re presented with the “Tracking prevention” section. Here you can choose between Basic, Balanced and Strict options, and each one lays out exactly what you get with each choice. While the other privacy settings are limited to simple text explainers and sliding dials, nothing is hidden or obscured.

But what about Safari? Apple’s own browser is the default on Macs, and the company has already taken a strong stance on privacy. It’s one thing to beat Chrome in the privacy stakes, but Microsoft has its work cut out if it’s going to convince Mac users to switch away from Safari.

Surprisingly, Edge and Safari actually trade blows pretty much equally here. Edge gives you far more control over what privacy settings you can change — Safari only lets you alter three privacy settings in its preferences. That said, Safari has some excellent built-in features that operate automatically. It can obfuscate your online fingerprint, for example, and can suggest strong passwords when you create new accounts. Edge doesn’t offer these features yet, but its plain-and-simple approach to managing your privacy is sure to win over many in the normally wary Mac crowd.

If you’ve used Chrome before, Edge will feel instantly familiar. The layout is almost identical, with a few minor differences in the iconography here and the rounded corners there. Edge uses Favorites and Chrome uses Bookmarks, but your settings in both apps are contained in a new tab rather than a pop-out menu.

As its based on Chromium, Edge does things a little differently to what some Mac users may be used to. The button to close a tab is on the right of each tab, for example, whereas in most other Mac apps the close button is on the left. To quit most Mac apps, you just press Cmd+Q. On Chromium-based browsers (including Edge), you must hold Cmd+Q. It’s a little jarring as it breaks with the way you expect apps to work on a Mac, and can also result in you accidentally quitting other apps if you hold the key combination a little too long. Mercifully, you can disable this by clicking the Microsoft Edge menu, then unticking “Warn Before Quitting.”

As well as that, we still prefer Safari’s URL bar. Type something into Apple’s browser and you get not only search suggestions, but links to your iCloud tabs on other devices, and matching results in your bookmarks and history. It can also perform mathematical equations for you. Try typing something into Edge’s URL bar and you just get search results, which isn’t as useful.

Perhaps Edge’s biggest strength in day-to-day usage is that it incorporates features from both Safari and Chrome. Safari’s “Look Up” feature makes an appearance, but Edge also works with Chrome-based extensions, of which there are over 150,000. With the exception of Safari’s password suggestions, we didn’t find ourselves pining for the features of Edge’s rivals (and if you use a third-party password manager, the lack of in-built password suggestions won’t bother you anyway).

Can it match Chrome’s performance?

Edge is based on the open-source Chromium browser, upon which Google Chrome is also built. Chromium is known to be a real speed demon, but many Mac users have reservations about using Chrome because of Google’s greedy data-collection policies. If Edge can marry Chromium’s speed with a much more stringent privacy outlook, that’s good news.

So, how does Edge do at the races? We tested it out in two major web browser speed tests: JetStream 2 and Speedometer 2.0. We used these tests previously when we analyzed Firefox, Safari and Chrome to find out which was the best browser for Mac.

First up, JetStream 2. Edge showed itself to be phenomenally fast in this test; its average score of 95.074 was neck-and-neck with Chrome’s 95.282 and just behind Safari’s average score of 98.804. All three were leagues ahead of Firefox, which scored 66.001.

As for Speedometer 2.0, Edge again scored highly, with a 68.4 average finishing just behind Chrome’s 71.4. Firefox and Safari lagged behind with 52.6 and 46.8 respectively.

It’s clear to see that Edge’s Chromium foundation means it’s built for speed. Although it was bested by Chrome, the differences were truly minimal, and we think any disparity here pales into insignificance when compared with the giant strides Edge has made over Chrome when it comes to your privacy.

This may be strange to read, but Microsoft’s Edge browser is one of the best web browsers available on the Mac. It comes with all of the speed and zip of its Chromium foundation, with none of the data-hoarding nastiness you get with Google Chrome. Microsoft is clear and upfront about your privacy options, and doesn’t try to hide anything that would prevent it from harvesting more of your data.

Safari is still a very strong option for Mac users, particularly for features like Handoff that piggyback on its in-built connectivity to the Apple ecosystem. However, Edge has the, uh, edge when it comes to other areas, offering more extensions and a more consistently speedy experience.

Which you choose will probably come down to personal preference, but for now we have to applaud Microsoft’s efforts here. It’s taken the time to understand what Mac users want from a web browser, and nailed it in almost every area.