HomeNewsThreadripper 3990X smashes its way on stage at CES with 64 cores...
News 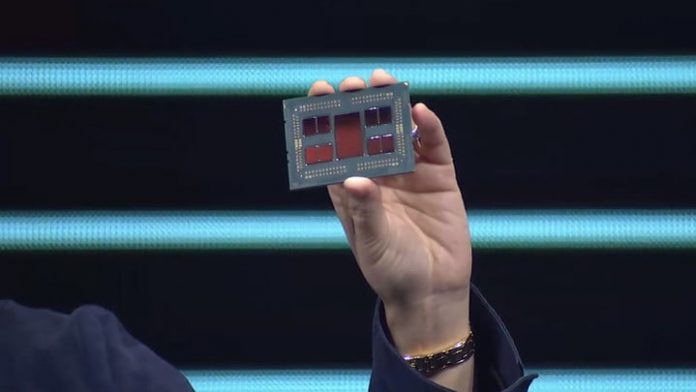 AMD might have begun the rollout of its new generation of Ryzen 4000 mobile CPUs, but it’s not quite done with the Ryzen 3000 generation just yet. Alongside its other CPU and GPU debuts, AMD also unveiled the Threadripper 3990X CPU, the world’s first 64-core desktop processor and an absolute nightmare for Intel’s HEDT market.

AMD had an amazing 2019 with the launch of its mainstream Ryzen 3000 CPUs, followed by its third generation Threadripper chips toward the end of the year. With up to 16 cores with the Ryzen 3950X and 32 with the Threadripper 3970X, AMD has a lot to offer those looking for strong multithreaded performance. But the 3990X, with its 64 cores and 128 threads, should be a whole different beast entirely.

We’d always suggest waiting for third-party benchmarks to tell us for sure how capable any new piece of PC hardware is. But while we await those in the coming weeks, we can get a rough idea of its capabilities by looking at AMD’s first-party results.

In its internal benchmarking using Cinebench, AMD showed the 3990X embarrassing even the incredibly capable 3970X, with its 32 cores. That’s perhaps to be expected, as the 3990X has double the cores, and Cinebench loves extra cores. But the Intel competition languished at a mere fraction of what the 3990X was capable of. An additional V-Ray benchmark was damning too.

Gaming performance on this sort of chip won’t be the same as chips that are designed with that in mind, but there’s no reason this CPU couldn’t do a decent job of it too. With a total of 288MB of cache and a boost clock of up to 4.3GHz in limited thread scenarios (2.9GHz base clock), the 3990X will not fall flat if it can’t use its extra core muscle. These are Zen 2 cores, and they’re powerful in small numbers or with the full 64-strength squad churning away.

Price is always a concern with these sorts of high-end CPUs, and in an about-face from previous years, AMD is actually more expensive than the Intel HEDT counterparts. At $3,990, the 3990X comes in at almost twice the cost of the 3970X. But when compared with Intel’s server-grade CPUs — the only chips it really has to compete with at this kind of performance — the 3990X’s price tag becomes practically paltry.

Facebook
Twitter
Pinterest
WhatsApp
Previous articleEverything AMD has announced at CES 2020: Ryzen, Radeon, and more
Next articleAre laptops with a 16:9 aspect ratio on their way out?