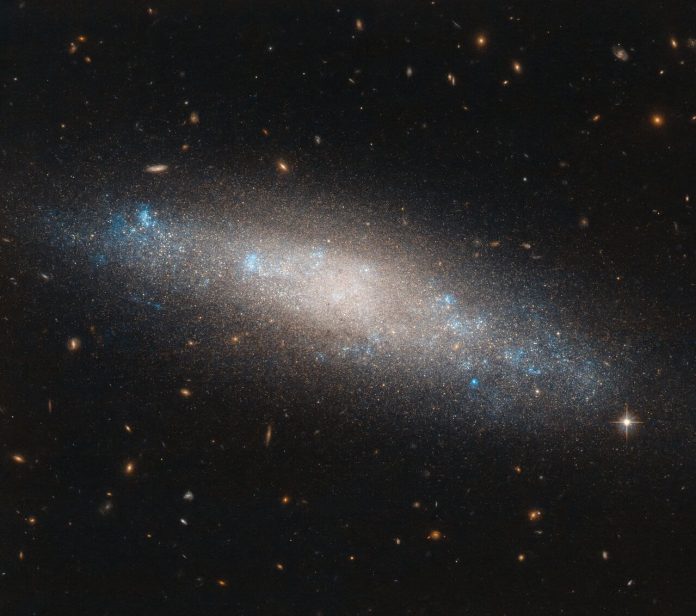 This unusually named constellation took its title from an Egyptian queen who ruled from around 250 BC. The Hubble astronomers explained the myth for which the constellation is named: “The story of Queen Berenice II is an interesting one,” the astronomers said. “A ruling queen of the ancient Greek city of Cyrene in modern-day Libya, and later a queen of Ptolemaic Egypt through her marriage to her cousin Ptolemy III Euergetes, Berenice became known for sacrificing locks of her hair as an offering to ensure her husband’s safe return from battle. Her husband did indeed return safely and her hair, which she had left in a Zephyrium temple, had disappeared — it had apparently been stolen and placed among the stars.”

Berenice’s Hair is located 45 million light-years away, and this particular image was captured using Hubble’s Advanced Camera for Surveys (ACS). This is the replacement for the Faint Object Camera which can capture a broader range of wavelengths than its predecessor. The ACS can image from the ultraviolet wavelength, through the visible light spectrum, and into the near-infrared wavelength. When it was installed it also had a wider field of view than other Hubble cameras (nearly twice as wide as the Wide Field and Planetary Camera 2, for example, though that has since been replaced with the updated Wide Field Camera 3). Due to its broad abilities, the ACS can map large areas of the sky with impressive detail, and can also perform spectroscopy to see how light interacts with matter.

To achieve this, the ACS is made up of three separate instruments: One camera called the Wide Field Channel which searches for remote and distant galaxies which can give clues to how the universe looked when it was very young, one High Resolution Channel camera which captures high definition images of galaxies with large black holes, and a tool called the Solar Blind Channel which blocks out bright visible light in order to detect faint ultraviolet radiation.

The ACS has been responsible for capturing some of Hubble’s loveliest images including globular clusters, tiny dwarf galaxies, delightfully symmetrical spiral galaxies, and a spooky skull galaxy.

Facebook
Twitter
Pinterest
WhatsApp
Previous articleNASA’s next generation rocket system is ready for shipping and testing
Next articleSamsung Unpacked — and the Galaxy S11? and a new Fold? — is coming Feb. 11