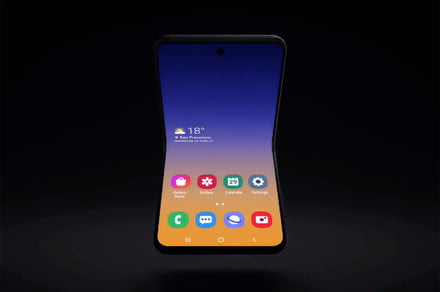 Samsung may just be getting started with foldable phones. Plenty of leaks have pointed to the fact that the company is working on a clamshell-style foldable phone to be called the Samsung Galaxy Z Flip. It’s set to be similar to the new Motorola Razr — and now we have a few more details of the upcoming phone.

The new leak comes from Max Weinbach from XDA Developers, and details some specs that we haven’t yet seen. Notably, according to Weinbach, the phone will feature a new “Samsung Ultra Thin Glass,” which will have a crease in it. That’s a little different from the Galaxy Fold, which features a plastic instead of glass over the display. The display itself will be a dynamic AMOLED display.

Weinbach also offers some new details about the Galaxy Z Flip’s camera. Reportedly, the phone will offer a dual 12-megapixel sensor, with one wide-angle sensor and one ultra-wide sensor. That’s a little different from previous rumors, some of which even suggested that the device would offer a 108-megapixel sensor.

Other features will reportedly include a capacitive fingerprint sensor on the side of the device, along with 15W charging and wireless charging. Weinbach also sent out another tweet noting that a front display on the phone will come in at 0.1 inches. We assume that’s a typo — other rumors have said that the display will come in at 1 inch, which would make a little more sense. That display will show information like charging and battery status, the time, and so on. It may also serve as a viewfinder for the camera — allowing owners to use the rear-facing camera for selfies when the phone is closed. That should make for higher-quality shots.

Previous rumors have given other hints as to what to expect. For example, the phone will reportedly come with a Qualcomm Snapdragon 855+ processor, which is Qualcomm’s flagship processor from last year. It’s unclear if the Snapdragon 855+ will be featured in all models of the Galaxy Z Flip, or only in North American models, with other variants to include a Samsung Exynos chip.

Facebook
Twitter
Pinterest
WhatsApp
Previous article2020 could be a monumental year for the Mac. Here’s everything I’m dying to see
Next articleApple to Participate in Meeting Advocating for Better Patient Access to Health Info