HomeNewsThe OxiCool is a zero-emission air conditioner that chills your house with...
News 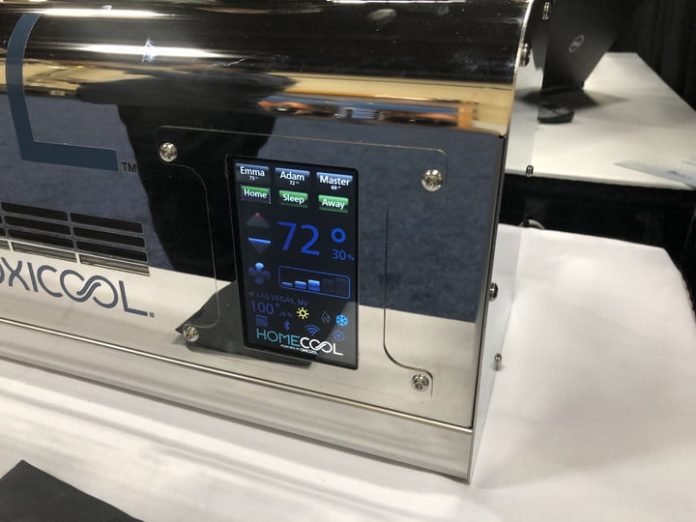 It was hard not to notice the giant, reflective cube at CES 2020. The OxiCool looks like a Martian playhouse, but its unique technology can actually cool your whole house with a little bit of water and natural gas.

A traditional air conditioner uses a refrigerant that transitions between liquid and gas, absorbing and releasing heat over and over again. The cold air gets pumped into the house, while the excess heat is routed outdoors. Refrigerants aren’t great for the environment and air conditioners release carbon dioxide.

The OxiCool uses water as a refrigerant, instead. While the OxiCool works similar to a vapor compression system, it doesn’t use a compressor. It’s a closed-loop system, meaning the cube should have just as much water on day 500 as on day one.

If you boil a pot of water but leave the top off, you’ll release steam into the air. Putting the lid on increases the pressure inside, because the steam can’t escape. With the OxiCool, an open flame heats natural gas to boil the water in a vacuum chamber, and molecular sieves capture the excess H2O vapor, reducing the pressure inside. Fans and condensers cool the vapor to return it to its liquid form, starting the cycle over again.

From the large, outdoor cube, coolant is pumped into the module and distributed to wall units throughout the home. These “Home Cool” devices have touchscreens and can control other units spread through the house.

The system uses about 10% of the electricity a vapor compression air conditioner of the same size uses. Because it’s also using natural gas, there will be an added cost, but the company said its operating cost should be around half of similarly sized units. It can be retrofitted into existing ductwork as well. OxiCool is looking into other sources of heat to vaporize the water, including hydrogen and solar thermal energy.

The outdoor unit is large, around 5 feet tall. It’s not a system for city dwellers at the moment. Pricing also won’t be available until the system is available for pre-order on January 10.

Those who have space and want to go a bit more off-grid may get the benefit of emission-free AC, though the mirrored cube and Home Cools will definitely signal a departure from ordinary air conditioning. Eventually, along with introducing alternative fuel sources, OxiCool might reduce the footprint.

Facebook
Twitter
Pinterest
WhatsApp
Previous articleAmazfit’s T-Rex smartwatch is so tough, it would take dino-mite to break it
Next articleThe new Microsoft Surface Pro 7 is $260 off right now on Amazon