The new Razer Blade now has a super-speedy 300Hz screen 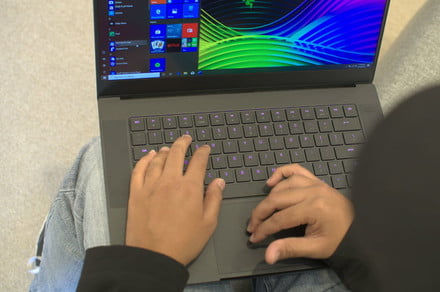 Razer is looking to win the hearts of gamers at CES 2020. It is upgrading it’s popular Blade 15 laptop with a new feature that you might miss if you blink too fast: A screen with a 300MHz refresh rate.

Although this ultrafast refresh rate is normally reserved for physical gaming monitors, it is quite rare for laptops. However, this won’t be a first. At last year’s IFA tech show in Berlin, Asus revealed a version of its ROG Zephyrus S GX701 with a 300Hz panel.

Still, a 300Hz panel on a laptop is quite a big deal. Most common gaming laptops feature a 60HZ refresh rate, and such high refresh rates are usually only found on dedicated gaming monitors. You’ll also find laptops with 120Hz panels, such as Razer’s own Blade Pro 17.

The 300Hz refresh rate, though, is much faster and can offer up quicker transitions between pixels, as well as reduced blurring in fast-paced games like Battelfield V, Fortnite, or Counterstrike: Global Intelligence. It’s still unknown, however, how the GPU would be able to handle this. Asus, though, once claimed that with a shorter refresh cycle, the display can respond faster to the rates pushed out by the GPU. On its ROG Zephyrus S GX701,  new frames are being pushed out every 3.3 milliseconds.

With such a powerful display, the cooling might also be a worry, but this isn’t something new to Razer. Last year’s 15-inch Blade sported the same vapor chamber thermal solution Razer has used for the past couple of years. It could once again make a return and help keep the Blade and the overall chassis cool.

Razer’s 2019 lineup was quite robust. It included the Blade Pro 17 and the new Razer Blade Stealth 13, as well as the Razer Blade 15. Each laptop had its own unique and then-new features, be it ultra-powerful graphics cards, an optical keyboard, or a GTX video card in a 13-inch laptop. The new Blade 15 with a 300Hz screen would make a nice addition to the lineup and give gamers even more choice than ever.