HomeNewsTest riding Manta5: The unholy offspring of a boat, an airplane, and...
News

Test riding Manta5: The unholy offspring of a boat, an airplane, and an e-bike 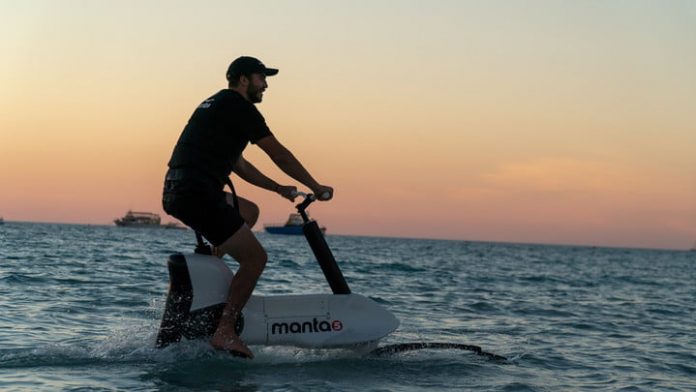 I’ve ridden a lot of weird things at CES: self-balancing unicycles, one-wheeled skateboards, and even a pair of rocket skates — but of all the wild and wonderful rideable contraptions iIve ever hopped on at this show, the Manta5 Hydrofoiler XE-1 might be the weirdest. It also might be the most fun.

In a nutshell, this thing is basically the answer to the question “what do you get when you cross a boat, an airplane, and an e-bike?” It’s a pedal-powered vehicle that lets you ride on water much like you’d ride a wheeled bicycle on land.

This isn’t one of those dorky big-wheel pontoon bikes, either. Instead of wheels, it’s equipped with a set of hydrofoils, which essentially function like wings in the water. As you pedal and propel the bike forward, water passes over these wings and creates lift, much like airplane wings create lift as they travel through air. This pushes the bike up out of the water — so much so that, at a certain speed, the only part of the craft touching the water is the hydrofoils themselves. The upshot of all this is that since there’s only a small portion of the bike’s frame touching the water when you’re foiling, the amount of drag you experience is drastically reduced, which means it takes less energy to propel the bike forward through the water. In other words, it gets easier as you start going faster.

The only trouble, of course, is that getting enough speed to make the hydrofoils work takes a lot of pedal power — more than most people are capable of producing on their own. So to solve this problem, Manta5 employed a technological trick that’s commonly found in modern ebikes: pedal assist. Motors built into the vehicle’s frame multiply the power you produce with your legs, which transforms what would otherwise be an exhausting activity into a leisurely and totally relaxed one.

The riding experience is unlike anything I’ve ever felt before. Sure, it’s relatively similar to riding a bike because you’re sitting on a seat, holding handles, and pedaling — but the feel of it is entirely different. The steering is more fluid and drifty than a wheeled bike, much in the same way that steering a boat feels more slippery and imprecise than steering a car. But along with that fluid steering, the XE-1 also has the playful feel of a mountain bike, mixed with the supremely smooth gliding sensation you get from a surfboard. It’s simultaneously familiar and foreign, which makes for an absolutely exhilarating ride that sticks with you long after you’re done.

Suffice it to say that this is one of the most exciting new entrants into the rideables category in recent memory. It’s certainly not cheap, and it’s not particularly practical either — but the XE-1 more than makes up for those shortcomings with an off-the-charts fun factor. I eagerly await the future where these badboys are available for rent at lakeside recreation spots all over the world, and those dumpy pedal boats are finally replaced by a worthy successor.