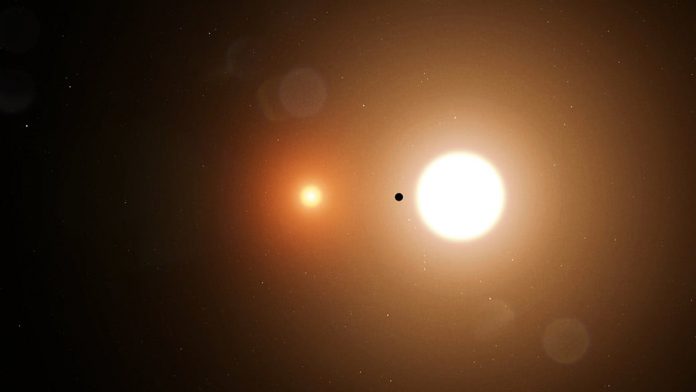 In this illustration, TOI 1338 b is silhouetted by its host stars. TESS only detects transits from the larger star. NASA’s Goddard Space Flight Center/Chris Smith

A high school junior named Wolf Cukier has made an unusual discovery, locating a distant planet that orbits around two stars. He located the planet while working on a summer internship at NASA’s Goddard Space Flight Center last year, where he looked at data from the TESS planet-hunting satellite as part of the Planet Hunters TESS citizen science project. In just a few days, he discovered this unusual system.

“I was looking through the data for everything the volunteers had flagged as an eclipsing binary, a system where two stars circle around each other and from our view eclipse each other every orbit,” the 17-year-old Cukier said in a statement. “About three days into my internship, I saw a signal from a system called TOI 1338. At first, I thought it was a stellar eclipse, but the timing was wrong. It turned out to be a planet.”

TOI 1338 b is a circumbinary planet, meaning that it orbits two stars. The stars it orbits are quite different from each other — one is around 10% more massive than our sun, while the other is a much smaller M dwarf at one-third of the sun’s mass as well as being cooler and dimmer. The two stars orbit each other relatively close by, and the planet orbits them both further away.

The two stars pass in front of each other from our perspective, forming what is called an eclipsing binary. The complex pattern of movement means it is difficult to spot, due to the irregularity of the transits occurring in the system. This is where citizen scientists like Cukier play an important role.

“These are the types of signals that algorithms really struggle with,” lead author Veselin Kostov, a research scientist at the SETI Institute and Goddard, explained in the statement. “The human eye is extremely good at finding patterns in data, especially non-periodic patterns like those we see in transits from these systems.”

Once the planet had been identified, scientists used software called “eleanor” to confirm that the transits being detected were a true reflection of what was going on in the system and not artifacts caused by the instruments.

“Throughout all of its images, TESS is monitoring millions of stars,” co-author Adina Feinstein, a graduate student at the University of Chicago, said. “That’s why our team created eleanor. It’s an accessible way to download, analyze, and visualize transit data. We designed it with planets in mind, but other members of the community use it to study stars, asteroids and even galaxies.”