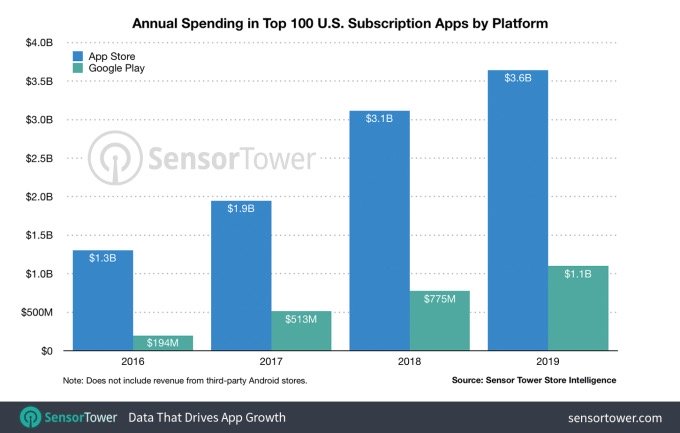 U.S. App Store customers spent $3.6 billion on the top 100 subscription apps of 2019, up 16 percent from the $3.1 billion spent in 2018, according to the latest report from Sensor Tower. The total spent on subscription apps was 24 percent of the $15.3 billion that the store generated from user spending overall last year.

Owing to its ad-free premium service, YouTube was the top subscription app on the U.S. ‌App Store‌, followed by dating app Tinder. During 2019, YouTube crossed the $1 billion milestone through in-app user spending alone.

On Google Play in the U.S. in 2019, users spent more than $1.1 billion in the top 100 grossing subscription apps on the platform, up 42 percent year-over-year from the $775 million spent in 2018. However, the ‌App Store‌ still leads in consumer spending, with $3.6 billion versus Google Play’s $1.1 billion, according to the report.

Across both the Apple ‌App Store‌ and Google Play, U.S. subscription app revenue reach over $4.6 billion in 2019, up 21 percent from the $3.8 billion generated by the top 100 subscription apps last year. The subscription revenue accrued by these apps is said to have accounted for 19 percent of the total $24 billion in U.S. consumer spend in 2019.

According to Sensor Tower, the top 10 subscription apps on iOS and Android devices grew by 10 percent in 2019, but the No. 11 to No. 100 apps grew by 35 percent in the same period of time, indicating that the subscription model is also helping the less popular apps earn more recurring revenue.

Despite their growth, subscription-based apps tend to divide the user community. Apple began incentivizing developers to sell their apps for a recurring fee instead of a one-time cost when it made changes to its ‌App Store‌ subscription policies in 2016. Usually, Apple takes 30 percent of app revenue, but developers who are able to maintain a subscription with a customer longer than a year see Apple’s cut drop down to 15 percent.

In late 2017, Apple began letting developers offer discounted introductory pricing and time-limited free trials on auto-renewable app subscriptions, based on the idea that subscriptions provide a higher likelihood of an engaged audience.