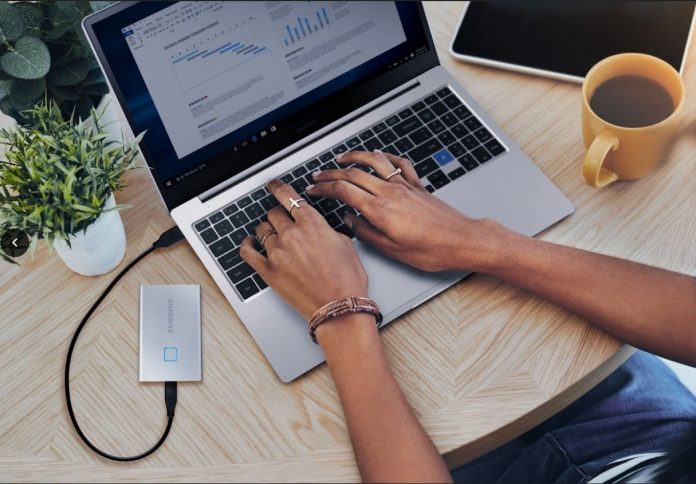 Samsung’s lineup of computer accessories is complete with both portable and internal SSDs, microSD cards, flash drives, and more. But, for CES 2020, Samsung is announcing an impressive-looking new T7 touch portable solid-state-drive (SSD) that is smaller than the size of a business card.

The T7 Touch Portable SSD is also the first from Samsung to feature a built-in fingerprint scanner. This means that it is more secure than your typical portable hard drive from other manufacturers. You can protect your files, documents, and more with just a touch of your finger.

Data speeds on the T7 touch will max out at 1,050 MB/S, mainly thanks to its USB 3.2 Type C connectivity. Samsung claims that this works twice as quickly as the previous generation T5 portable SSD. The T7 Touch will come in different capacities, starting at 500GB, but ranging all the way up to 1TB or 2TB for maximum storage.

Additionally, the T7 touch also has an activity light near the fingerprint sensor. This will help provide you a visual cue and let you know when the SSD is in use and when files are being transferred. The T7 will also come in two color options to match the look of your devices. This is a change from last year’s T5, which comes in a total of four colors, black, red, gold, and blue. Colors on the T7 will just include the standard silver, as well as a more simplistic black.

Samsung did not provide specific pricing or availability on this new SSD, but last year’s T5 was priced at around $200. Samsung says a version without the fingerprint sensor is also planned and will be coming later this year, and it could possibly be cheaper.

This new SSD joins Samsung’s lineup of new computers and monitors in 2020. That includes the affordable, but premium-looking Samsung Galaxy Book Flex Alpha, as well as the Galaxy Chromebook.

Samsung also announced new gaming monitors, too, and re-branded them under the Odyssey name. That includes both the Odyssey G7, as well as the Odyssey G9. These monitors sport both AMD Free-Sync 2 and Nvidia G-Sync support, promising gamers a lot of choices.