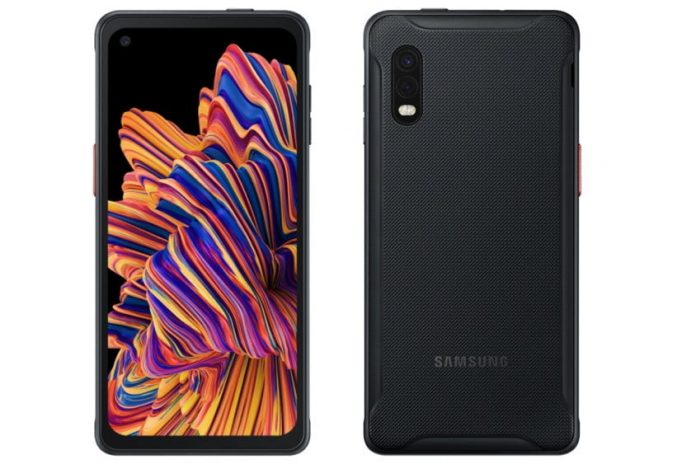 After accidentally leaking it on its own Finnish website, Samsung has now gone official with its latest rugged smartphone. Called the Galaxy XCover Pro, the phone is built like a tank and is primarily intended for field workers and enterprises. It will go on sale for $499 in the United States sometime in the first half of 2020. Individual customers will be able to buy the Galaxy XCover Pro as well from Samsung’s website for the same price.

Being a rugged device, the Samsung Galaxy XCover Pro’s headlining feature is its thick exterior that is designed to withstand falls (of up to 1.5 meters) and other damages a regular glass phone won’t likely survive. It’s IP68 dust and water-resistant and also MIL-STD 810G certified which essentially means it won’t die on you in extreme environments of high temperatures, altitudes, and more.

The other highlight that helps the Galaxy XCover Pro stand out is its removable battery. You can swap out the phone’s hefty 4,050mAh battery for a new pack (that’s sold separately) when you don’t have a charger or outlet around just like the good-ol’ days. In addition, it supports 15W fast-charging over a USB Type-C port.

What’s more, the Samsung Galaxy XCover Pro features a set of pogo pins for directly plugging in a range of external accessories like card readers, scanners, and more. It’s EMV Level 1 certified allowing businesses to use it as a point-of-sale terminal for accepting payments from NFC-equipped credit cards, phones, and watches.

Under the hood, the Samsung Galaxy XCover Pro offers a standard set of mid-range specs. There’s a 6.3-inch 1080p screen (that you can operate with gloves as well as wet fingers), a 2GHz octa-core Samsung Exynos 9611 chipset, Android 10, 4GB of RAM, and 64GB of onboard storage that can be expanded via a MicroSD card.

There are two cameras on the back — a primary 25-megapixel sensor and a secondary 8-megapixel shooter. On the front, you’ll find a 13-megapixel selfie camera as well. Plus, a fingerprint sensor is available on the side housed under the power key. The phone even comes equipped with two programmable hardware keys, none of which are bound by default to the company’s virtual assistant, Bixby.