Qualcomm says 2020 is the year 5G will finally go mainstream 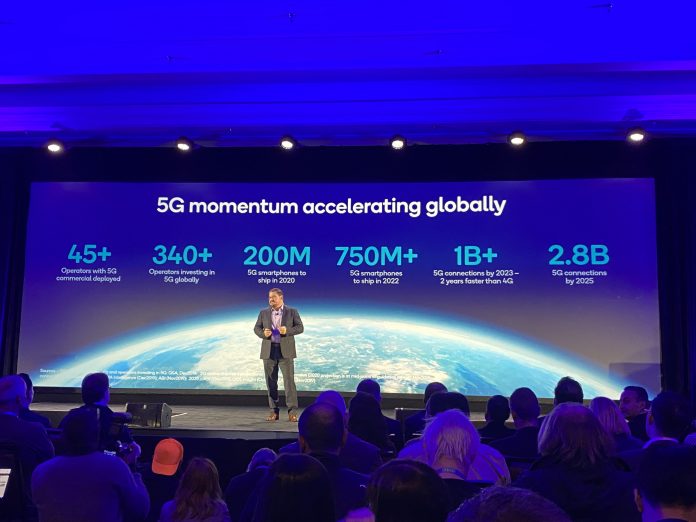 Qualcomm is all-in on 5G and thinks you will be too soon enough. Sure, there’s been skepticism about the newfangled mobile tech, but it won’t have an impact on adoption rates. Two hundred million 5G smartphones will ship in 2020, said Cristiano Amon, president of Qualcomm, at the company’s CES 2020 press conference Monday. And there will be 1 billion 5G connections by 2023, he added.

“I repeat: The best 4G smartphone you can buy today is a 5G smartphone,” Amon said. And when it comes to that skepticism, Amon points to the history of networking tech in the U.S.

Today’s 4G connections took years to roll out; the energy put into setting up 5G technology throughout 2019 means 2020 will be the year it’s finally implemented and used by consumers.

“2020 is the year we really expect 5G to scale, and it’s moving faster than 4G despite skepticism,” said Amon.

5G means more than just faster cell phones, however. The combination of Wi-Fi 6 and 5G will lead to fixed wireless broadband, thanks to 34 companies using Qualcomm’s Snapdragon X55 5G modem-RF system. Fixed wireless, where a mobile networking tech like 5G is used to bring internet access to the home, has developed more slowly than the mobile adoption of the tech — and that will change, apparently.

“But the big news is what’s happening in the PC space,” Amon noted. Qualcomm’s efforts to redefine the PC as an always-on, always-connected device is a huge transition. The company expects to see lots of new devices through partners such as Lenovo, Asus, Quanta, and more.

“The 5G PC is now a reality … and that will define the future of productivity,” Amon said as he introduced Johnson Jia, a senior vice president with Lenovo, which unveiled the world’s first 5G PC, an ultraportable 3-in-1 Windows laptop called the Yoga 5G. That internet connection means faster streaming, real-time video chats on the go, gaming on the go with ultra low latency, and more.

The laptop relies on the Snapdragon 8cx 5G Compute Platform, which includes support for both millimeter wave and sub-6 GHz connections — the two flavors of 5G networking that have dominated carrier implementations in the U.S. It will start at $1,499 and go on sale this spring, Jia said.