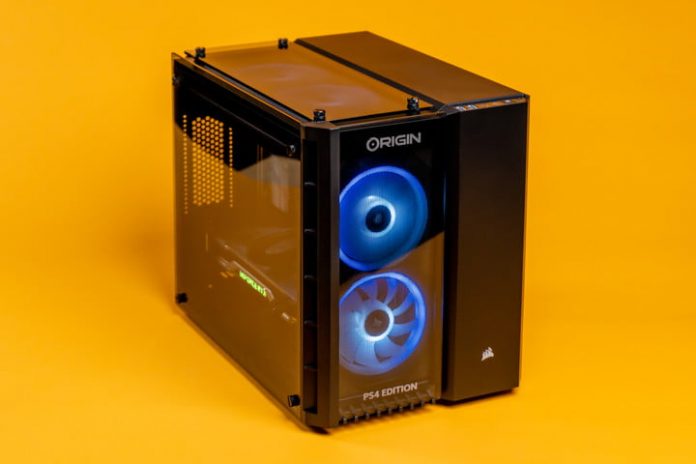 Console and PC gamers love only one thing more than their platform of choice; arguing about why it’s best, and everything else is the worst. It’s an ancient war, started in the days of IRC channels and forum warriors, now waged in tweetstorms and memes. This conflict obscures the simple fact that most gamers own at least one console and one PC.

Origin’s Big O embraces that fact. It calls a truce, brokers a pact, forms an alliance that some might think unholy. This is a high-end gaming PC that can be equipped with the most powerful components possible. It also contains a console of your choice. And it wraps both in a compact cube that’s smaller than most mundane desktops.

Origin’s original Big O concept was a massive tower of power with a PlayStation 4, Xbox One, and even Nintendo’s Switch. That first incarnation, which never came to market, was an eye-catcher. It was also far too large to be useful for even the most hardcore gamers.

The new Big O takes a different approach. Its predecessor’s custom Origin case is replaced by a compact Corsair 280X chassis that’s less than 16 inches tall, 10 inches wide, and 14 inches deep. Corsair’s purchase of Origin in July of last year likely has something to do with the shift.

It’s a drastic change with both compromises and benefits. Let’s start with the bad news. Slicing the size means there’s only room for one console. A PlayStation 4 Pro or Xbox One S (my tester had the PS4 Pro). Nintendo’s Switch isn’t an option with the new Big O. That’s a bummer. The Switch is my favorite console, and would be a great companion to a gaming PC.

Now, the good news. Putting the Big O on a diet makes it downright sensible. It’s smaller than even my home gaming PC, a modest rig I built inside NZXT’s popular H500 mid-tower. Though I set it on the floor, it would’ve easily fit on my desk. It could even fit in my entertainment center if I removed one of its optional shelves.

Most of us can only play one game at a time. There’s little reason to have both sides of the Big O turned on at once.

Personally, I have a single-monitor setup, so I connected each half of the Big O to my monitor. My monitor, like most sold since the dawn of time, automatically switches to an active input if it doesn’t detect signal from the others. That made switching a breeze. I only had to visit my monitor’s menu buttons when I had both the PC and console sides active.

But why would that be a problem? Talented Twitch streamers aside, most of us can only play one game at a time. There’s little reason to have both sides of the Big O turned on at once. If you do want to stream on Twitch, however, the built-in El Gato is going to be very, very handy.

Big where it counts

The console side of the Big O is liquid-cooled and can be upgraded with a solid-state hard drive (my tester’s PS4 Pro had a 2TB Samsung 860 QVO). Origin claims this leads to faster load times, which is true, but perhaps not to the degree you’d expect. You’ll see the most benefit in games with the longest load times, like The Witcher 3.

Origin doesn’t make any specific claims about better performance from the console side, which makes sense. Thermal throttling isn’t an issue for the PS4 Pro or Xbox One S, so better cooling won’t offer a performance boost.

As you might’ve noticed, the Big O can support the most powerful PlayStation (the PS4 Pro) but doesn’t support Microsoft’s Xbox One X. Why? Origin says the Xbox One X requires an optical drive to function, and the Big O only supports digital games. Gamers who rely on discs will find their existing physical library isn’t much use with the Big O. That’s a bummer.

On the PC side, my tester was the pinnacle of power you’d expect from a top-tier PC builder like Origin. It came with an AMD Ryzen 3900X processor, an Nvidia GeForce RTX 2080 Super FE graphics card, 16GB of 3200MHz RAM, and terabyte solid-state boot drive. It also had a built-in El Gato 4K60 Pro capture card.

Sorry, that was rude. But what would you expect? The Big O crushed everything except notorious CPU-hog Assassins’ Creed Odyssey at 4K and 60 FPS, and even Creed averaged 51 frames per second on average. That’s the second-best result we’ve ever recorded in that game, beat only by one of our mid-tower open-case test rigs with the same Nvidia RTX 2080 Super and an Intel Core i9-9900K processor (it averaged 53 FPS).

And did I mention it’s small? That continues to be the real story. Somehow, Origin’s Big O packs an absurdly fast gaming PC and a fully functional PlayStation 4 Pro into a space no larger than two shoeboxes side-by-side.

Rigs with this level of PC game performance usually show up at our office in massive boxes that weigh over 80 pounds. The not-so-Big O? It’s small enough for a LAN party.

The Origin Big O packs a high-end gaming PC and a console into a small chassis, and does it without sacrificing performance or stability. It sounds like the best of everything.

Perhaps it is. And you’ll pay for it. The Big O is available now at an MSRP of $2,499. You could easily buy a mid-range gaming PC and a PlayStation 4 Pro for that price.

Still, I can see the value. The Big O will appeal to gamers who primarily play at a desk. It’s also an ideal rig for a streamer or content creator since it squeezes the necessary hardware (including a capture card) into one small box.

The timing is a bit unfortunate. We’ve reached the end of the PlayStation 4 Pro and Xbox One console cycle. The Big O seems awesome right now, but come the end of 2020, it’ll feel outdated. I asked Origin about its upcoming plans. Origin says the Big O “ will continue to evolve and include new technology as it becomes available” but can’t confirm the new consoles will be supported.

That’s a problem Origin will have to tackle later this year. For now, though, the Big O is an impressive piece of kit, and proof that consoles and PCs can learn to play nice.