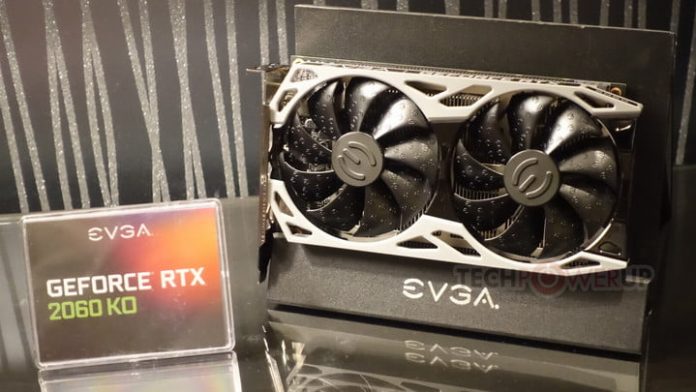 Nvidia hasn’t had much to say at CES 2020 so far, but its board partners are making waves all the same. EVGA has a new RTX 2060 KO edition graphics card on show and its price tag is exceedingly attractive. At just $300, it is $50 less than the RTX 2060’s launch price and just $20 more expensive than AMD’s new RX 5600 XT. This seems like a deliberate move to add extra pressure to the new AMD GPU, but it’s not yet clear if the pricing change is exclusive to EVGA’s new card or will be more universal.

Nvidia’s high-end RTX graphics cards like the 2080 and 2080 Ti, don’t have anything in the way of competition for AMD, and their pricing reflects that, taking huge leaps in cost for moderate uplifts in performance with each new product in the stack. But at the midrange, things are much more competitive and ever since AMD launched its RX 5700 GPUs in July 2019, there’s been some shuffling of pricing as the red and green teams looked to outmaneuver one another.

Spotted by TechPowerUp on the CES 2020 show floor, the little GPU is clearly a budget design, with a compact, aluminum cooler, and dual fans. It also has just three display outputs: A legacy DVI-D, one HDMI, and one DisplayPort. It sits at reference clocks too, suggesting there hasn’t been much tweaking with this design, though it does have a full backplate, so not every corner has been cut.

EVGA claims that the RTX 2060 KO edition will launch the week of January 13, and will be priced at $300. That puts it within $20 of the new RX 5600 XT, whilst offering support for ray tracing and deep learning supersampling. While those aren’t game-changing technologies in their own right, they are nice additions that the AMD GPU can’t compete with.

It’s possible that this is the first step in countering AMD’s newly competitive midrange cards like the 5600 XT, though VideoCardz reports that EVGA went it alone on this design and received no special treatment or pricing from Nvidia. Either way, expect other board partners to offer similarly priced RTX 2060s in the near future.

But they may not be happy about it. $50 is an aggressive price cut to take on what is likely an already low-profit-margin component. Not only does this RTX 2060 look like an attractive alternative to the RX 5600 XT at a mere $20 premium, but it looks even more so when compared to the GTX 1660 Ti and 1660 Super. Those cards are $30-$50 less, but perform significantly worse, making the RTX 2060 KO edition an intriguing option for anyone looking to upgrade their system for around the $300 mark.

We’ll need to wait for third party benchmarks to tell us if it’s really worth recommending this card, though. The limited I/O options, standard clock speeds, and potentially low-tier cooling, could mean it’s not a great example of the card, even at its low price. But a $300 RTX 2060 has a lot of potential. Especially just as AMD was hoping to gain momentum with its midrange GPUs.