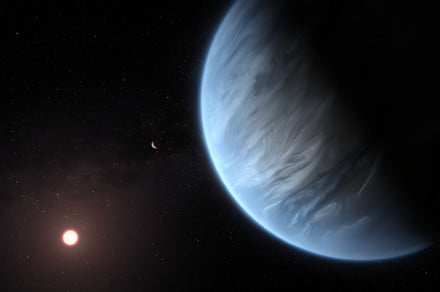 Want to maximize your shot of finding extraterrestrial life out there in the universe? A good way to start is to look for the presence of oxygen on exoplanets; something which might be a bit more common than we think. Because oxygen is crucial for life on Earth, it makes sense that it might also be a part of life for other non-Earth lifeforms.

With that goal in mind, a team of international researchers has come up with a revised technique that they think will speed up the hunt for ET.

Because of the distance of exoplanets, there’s minimal hope of being able to visit them for the foreseeable future to carry out Star Trek-style missions. Instead, scientists must use telescopes such as NASA’s James Webb Space Telescope, the successor to Hubble. Using telescopes like this, scientists can get a closer look at the atmospheres of exoplanets. This is done using something called transmission spectroscopy. When a planet with an atmosphere passes in front of its host star — the equivalent of our sun — the light from the star crosses the planet’s atmosphere and gets absorbed by an assortment of gases. By looking at this light, scientists can guess which has gas has absorbed it.

“In our work, we have identified a spectral signature of the oxygen that was missing before in our model,” Thomas Fauchez of NASA’s Goddard Space Flight Center told Digital Trends. This atmospheric chemistry model can rapidly detect an oxygen-rich atmosphere when looking at exoplanets. “It happens that this is actually the strongest signature of the oxygen that we may be able to find within [the James Webb Space Telescope] spectrum.”

The plan is to deploy the model when the telescope launches in early 2021. Don’t expect immediate results, though.

And what if it turns out that aliens aren’t breathing oxygen, or relying on it in some other way at all? Well, they’ll be a lot tougher to track down. “Finding a new signature of the oxygen to be used for future observation is one more chance to detect it,” Fauchez said. “After it would be the job of the astrobiologists to know whether this oxygen has been produced by life or not.”

A paper describing the work was recently published in the journal Nature Astronomy.